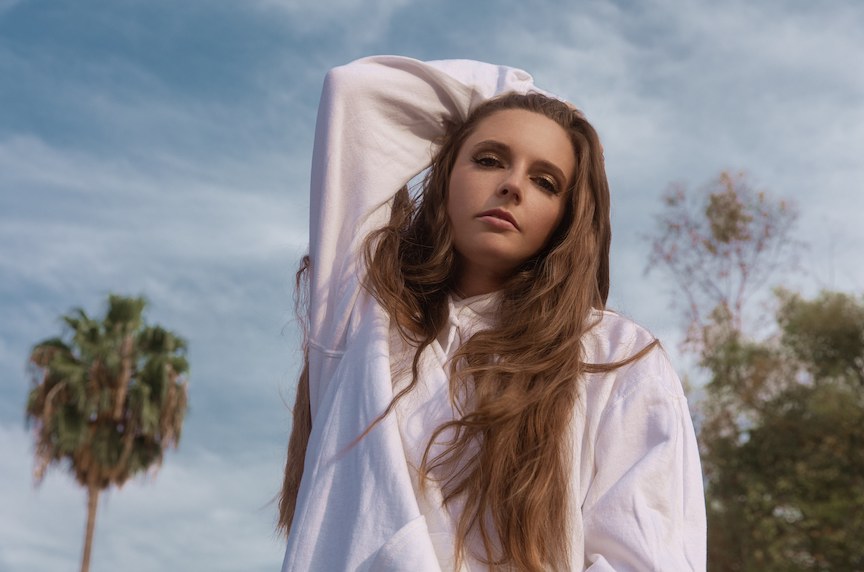 BLÜ EYES has a cosmic, ethereal vibe and her gentle voice and synthy tracks combine in such a beautiful way. Her song "Just Life" is a series of revelations made by the young artist over soft, trickling guitars and effortless melodies. We talked to her about the song, staying motivated, and speaking up when you have an opinion.

BLÜ EYES: I was born into a super musical family and was just around it all the time growing up - singing Beatles songs and Christmas carols whenever we all got together in full-on choral style harmony. So, when I started making up my own songs and playing guitar at around age 12, it didn't feel like anything unique or special - I was just expanding on that musical foundation I was given as a kid. I just had fun doing it, so I did more of it, not thinking of it as a career at all until college. Once I started seeing my peers pursuing it professionally, I was like, "Hey, I could do that."

Tell me about "Just Life" what's the story behind the song?

BLÜ EYES: I wrote Just Life with my good friends Jonny Shorr and Haley Joelle - we had a session one day where we just started talking about the idea of writing a sort of letter to your past self and what you would say. Jonny started playing these BEAUTIFUL chords on his synth and messing around with different melodies, and before we knew it, the song was staring us in the face. When I left the session that day, I thought, "Wow, that is a really nice song we just wrote," but I didn't necessarily have the thought that it would be part of my artist project. The next day, though, Jonny sent us a demo of the song with some production sketched out, and when I listened back, I was like, wow. That is SO beautiful; I have to put it out.

What has been keeping you motivated during 2020?

BLÜ EYES: I guess just the fact that I have so much fun making music. When so much is totally uncertain all around you, it's so valuable to prioritize your happiness, so you don't go completely insane. Creating new music makes me all kinds of happy, so I've just been trying to keep that creativity going and chase that incredible feeling it gives me. In conjunction with that, I've also been making an album this year, so working towards completing that goal has definitely given me some great focus.

BLÜ EYES: There has been SO much good music coming out this year; I've just been so inspired by all of it. Especially seeing how many people have also been making albums this year, it's been really inspiring me to get mine over the finish line (and start making the next one, haha).

BLÜ EYES: I think what's held me back the most in my career has been my people-pleasing tendencies. I spent so many years just trying to make the music that I thought I was SUPPOSED to make, as opposed to really spending time focused on what I WANTED to make - so much so that I lost track of what music I "liked" and "didn't like." I only saw music that was "successful" or "not successful," which is just plain sad. And, of course, trying to do what I thought would make me successful only pushed me farther away from that success... Oh, the irony. This year, though, being stuck at home, away from all the politics and BS of the industry, has just allowed me to really find my creative zone and make an album that I'm incredibly proud of. At the end of the day, of course, I want people to like the music, but if for some reason they don't, I can at least sleep at night knowing that I gave my all making something that I think is rad.

BLÜ EYES: ALWAYS SPEAK UP IF YOU HAVE AN OPINION ON SOMETHING. If it's a lyric, a business deal, a mix, a photo, whatever it is. You will always be happier that you said something, even if you wind up getting shot down or democratically overruled. Maybe it's just my experience, but I feel like as young women, we're kind of cultured to be "polite" and not challenge someone when they appear confident in being right. Obviously, you want to be respectful of everyone you're working with, but if you have a question or a conflicting idea, SPEAK UP. More often than not, you're not the only one thinking it. And at the end of the day, your ideas, your opinions, your taste, those things are all a part of your value. If the people you're in rooms with aren't responding to your value, then it's probably time to find some different rooms.