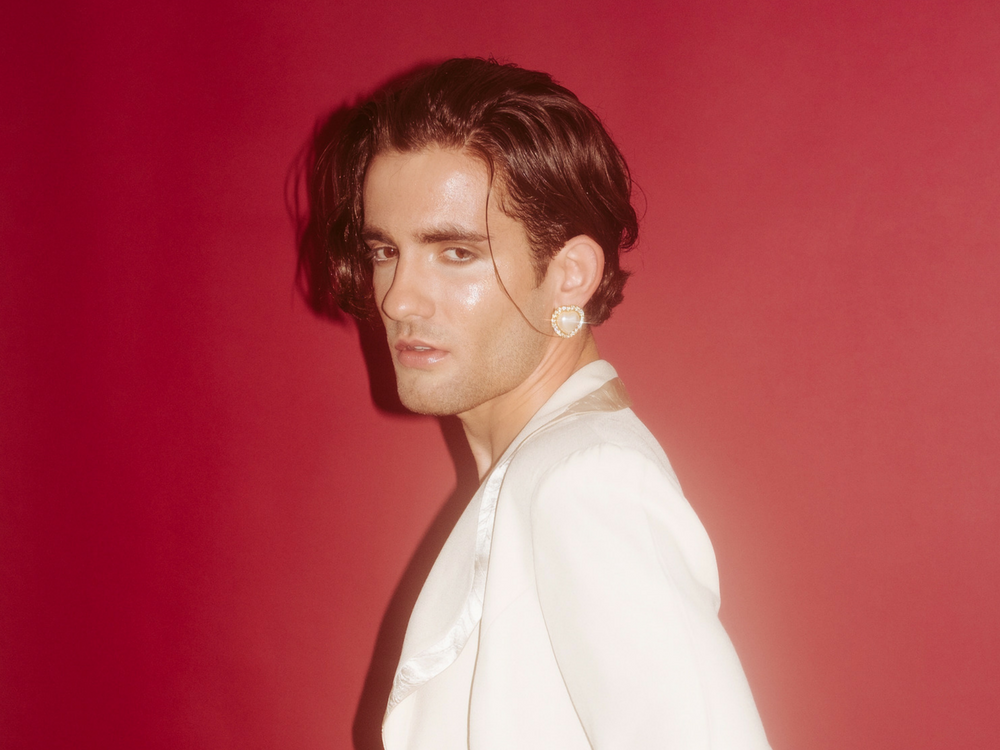 I was instantly hooked on Brasko when I first heard his song “Static” I love some Prince vibes in my music. His new song "TMYLM" is insanely catchy and he has this glam rock androgynous look that I think we’ve all been missing.

He started his music career very young and out of necessity. He says, “I think it was like, honestly, my survival instincts because I was so bad at everything else...I was like I need to be good at music if any girl’s ever going to talk to me.”

He learned to play guitar and started writing songs. After high school he moved to Nashville. His music has gone through several phases but his project now is exactly what he wants his music to sound like and the kind of artist he wanted to be.

He explains, “Me and my producer piece together different elements to what makes us enjoy a song and what we wish we could hear. When we lay down the rhythm section we always go after a '90s hip hop vibe. We pull a lot from Ice Cube, Wu-Tang Clan, early Snoop Dogg. That's what we pull from as far as the rhythm section goes. But then we're both total Queen nerds, so we love A Night at the Opera. So we layer them with big, thick guitars and make sure there's all kinds of sub melodies and all that, and then we top it off with a shimmery, feminine vocal on top to make it this weird sound that I have now.”

The element that sets him apart is that he’s not afraid to show off his feminine side. It’s very David Bowie, very Prince, he’s not afraid to wear a blouse or rock some makeup. It’s all about owning that part of yourself and not being scared of what people think of you or how you’re supposed to dress or look.

He says, “I think as a man, I knew the part of me that was a writer, like my muse or whatever you want to call it, was always a little bit more on the feminine side and I was conflicted about that. Because it walks differently than me, it talks differently than me. I probably sound like a psychopath, but this thing has been rewarding me with songs since I've let him out of the cage a little bit.”

That’s not to say he doesn’t get some hate for that, it takes a bold person to pull it off. He laughs, “Basically when I started this I was like no girl's going to talk to me anymore and every guy's going to hate me. That's what I thought. And while it is true that it closed off a conversation from a section of people, and I felt isolated when I started this thing, it flooded open this door of all these people, and honestly, way more interesting people that were maybe even interested in talking to me before.”

Basically, if you can’t accept some gender fluidity in your music, maybe this isn’t the music for you, but if you like pushing boundaries and playing with new sounds and new perspectives, that’s what he wants.

He muses, “I think the dance between masculine and feminine, at least very much on a stage, is very demanding of eyes to say the least. So it's like you will listen to me, you will listen to these songs I wrote, and you will not look away.”

His songs do read pretty sexual, but what I appreciate about them is that they’re not surface level songs they’re not degrading towards women, they’re more of a conversation between two people. He talks about it in a spiritual way and makes it more poetic. Even in the imagery, women are dominating.

He says, “I think misogyny has been a huge topic of conversation. I thought it'd be cool to embody the whole power play reversed between men and women. When I do ever talk about any kind of intimacy, I always make sure it is conversational. I always make sure it's like what is she doing, what is she saying, this is what I'm doing, this is what I'm saying. And it's like a dance. And it should be because the song already wants to make you dance, so I think if I'm talking about that topic it should be a dance between two people.”

His latest song, “TMYLM” which stands for Tell Me You Love Me is the first song he wrote for the project and it’s about a desperate love, and almost the need for reassurance in a relationship. The song itself, is upbeat and the epitome of shimmery pop, but the lyrics have a sadder undertone.

He explains, “It sounds, at first glance, like a freeing love song, but if you listen to the lyrics it's two broken, lost people trying to get some desperate validation from the other person and they don't care if they lie to them or not.”

His highly-anticipated EP doesn’t have a release date yet but there’s some personal tracks on it, and he does get a little nervous about releasing them.

He says, “It's very much more of like a social experiment for me. I very much view things from an outsiders point of view, and that's what's interesting to me. They are personal because I am drawing from experiences, and I am striking a chord with myself hoping it strikes a chord with other people. I very much, so far with these songs, have more done a play on words. And I've written about things that have intrigued me as opposed to completely personal things.”