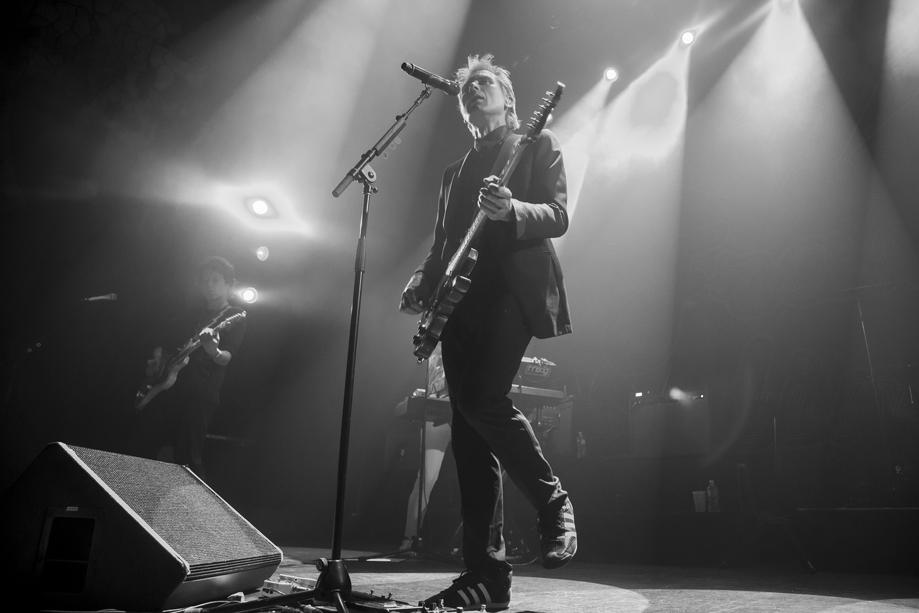 Franz Ferdinand is touring for their 2018 album Always Ascending and it’s fitting for the wave of fans who are still clamoring for more from the Scottish based indie rock favorites. They’ve been an international success since their debut single “Take Me Out” flooded every form of media in 2004. Despite their success abroad since their debut they’ve had only a few minor hits in the US since causing them to slip back into underdog status. However, this has ultimately allowed them more freedom to explore a new wave vibe and fully dive into their unadulterated weirdness. They stopped by Emo’s in Austin to play to a crowd of over 500 in the indoor venue, opened by the delightfully off the wall post-punk band Priests.

Frontman Alex Kapranos has changed for the better since the band’s early years. He no longer looks like the mop headed boy next door in a leather jacket, and instead sports an enviable spiky platinum mane, a sharp black suit and a bolo tie. After years of touring he knows just how to work the crowd, reaching out at just the right moment to briefly touch the fingertips of fans and throwing them a wink before sauntering away.

He’s somehow combined the punk edge of Billy Idol, the androgynous allure of David Bowie and the energy of a revivalist preacher. Yes, that’s right. It’s a theme that pops up in the music video for “Feel The Love Go” off of Always Ascending, where Alex plays the role of a televised faith healer. It’s low-tech and unpolished in a way that’s equal parts humorous and bizarre.

It translates well into their live performance. Toward the end of the set after blasting through several of their well known up-tempo hits Kapranos takes a knee, and gestures to the audience to join him. Hesitantly the crowd kneels onto the sticky concrete floor covered with smashed beer cans and plastic cups.  Although the songs sounded perfectly clear, his Scottish brogue becomes muddled even to those in the front row. It was a kind of surreal moment where no one knew exactly what was happening before they blasted back into action with “This Fire” and the audience glanced around as though they’d woken from a surreal dream.

Their previous style was perfectly riotous with unique lyrics and rapid fire tempo changes, and they’ve kept that in many ways.This new era for Franz Ferdinand doesn’t feel restricted by a particular image that they’ve curated. If you listen to the B-Sides or their EPs they’ve always shown an affinity for the strange with a talent for funneling that into catchy radio hits. Always Ascending is a solid dance album but it meanders between pop, rock, electronica, and a synth-heavy 80’s throwback reminiscent of bands like The Talking Heads.

In part they had to develop a new sound after their original guitarist Nick McCarthy left. Dino Bardot joined as their new guitarist and they added Julian Corrie also known by his stage name Miaoux Miaoux on synth and keys. Corrie has produced remixes for other Scottish based heavy hitters like CHVRCHES and Belle and Sebastian. The new songs don’t have the same kind of infectiousness that their previous work has and the album isn’t as cohesive. However, their stylistic fluidity is admirable and adding some new blood to the mix was bound to change up the original dynamic of Franz Ferdinand.

Despite their new direction Franz Ferdinand is able to draw in their fans. One fan in particular had made a sign on black poster board with the likeness of Kapranos, which caused him to pause between songs and move closer to speak with her. Like a proud father he accepted the fanart, and showed it off to the entire crowd and invited them to join him in applause for her work. Their love for the fans extended to the end of the show as the band was leaving the stage, they handed out a few signed setlists to the people closest and a few of the roadies added at least 20 unsigned copies for some to take home as a piece of memorabilia.

Even if their foray into their new chapter is a little shaky, Franz Ferdinand is evolving and reaching audiences who have never heard them before. With their dedication to both old and new fans, their future looks bright.