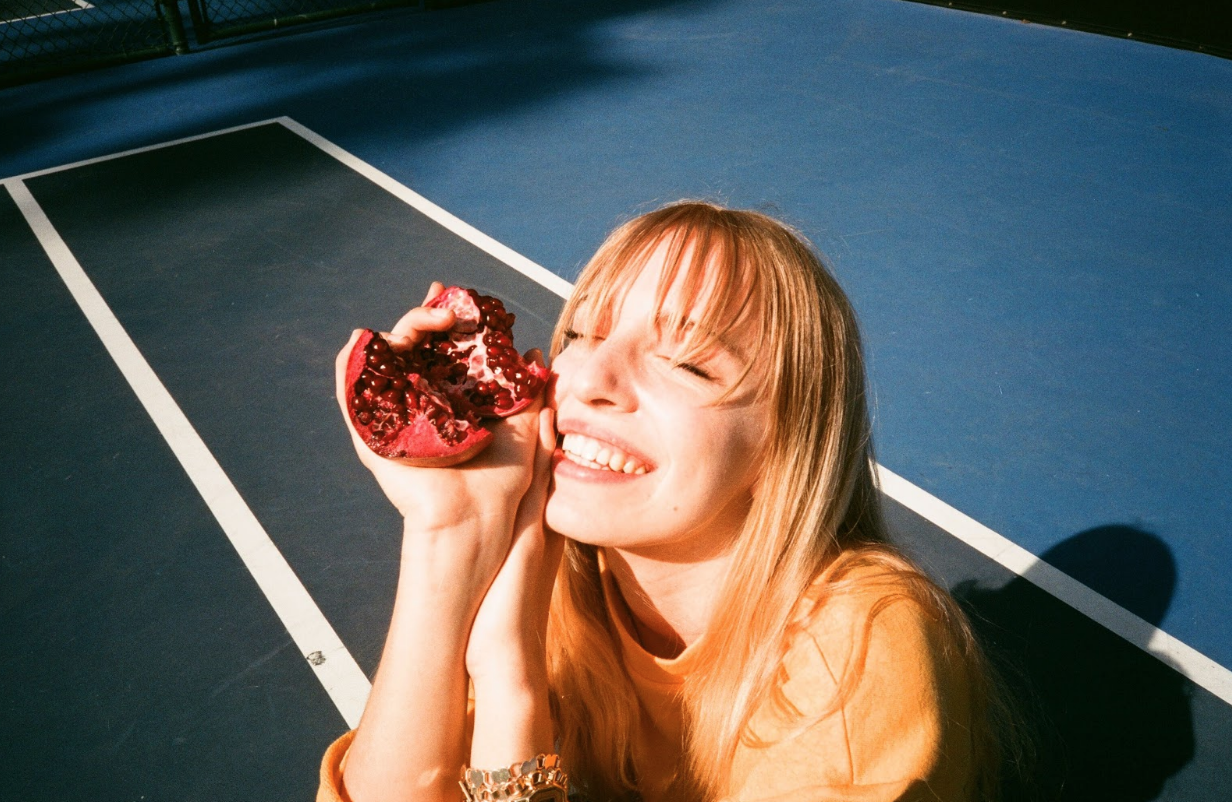 In her latest single “Superfruit,” nineteen-year-old New York indie-pop artist Maude Latour explores the sweetness of young love along with the daunting nature of college and the life that comes with it. We talked to her about her new single, her homemade music video, New York, and finding real human connection in the age of Instagram.

When did you start making music?

Maude: I started in high school, but I have always been an onstage, theater, talent show, performing type of person. I was always in choirs and I’ve always written poetry, short stories and journals. In high school, I started writing songs and performing around New York. Then I started posting videos of me singing on Instagram and it grew from there. My senior year, I released a song through TuneCore as a senior project and it got picked up by some playlists on Spotify.

You grew up in New York, but where are you from originally?

Maude: Well my dad is Dutch and my mom is American, but I was born in Sweden and then I moved to London then New York. Then I spent some time in Hong Kong between 5th grade and High School before I moved back to New York. I consider New York my home base for sure.

How do you think these places influenced you as an artist?

Maude: I think New York allowed me to know myself in situations a lot younger than I would have if I had grown up somewhere else, and it allowed me to translate that sonically. I don’t really know how the other places have influenced me since I didn’t live there while I was making music. I think New York has had the biggest impact, especially since there are so many places to perform. I would play at bars and different venues and the built-in community of singer-songwriters in the city likely had some impact in that sense. I think if I had gone to a performing arts high school like Laguardia, that would have deterred me from pursuing music more.

Could you go explain this thing you do on Instagram called “Spill Therapy”? What inspired that and how do you balance being open and honest with your fans while also keeping a healthy level of distance?

Maude: I’ve always kind of overshared on Instagram. I’m an oversharer in general. I kind of did that stuff before I was even doing music. Also, my manager calls it spill therapy. I never really gave it a name and it was never supposed to be connected to music. It was just games I would play on my Instagram to try an balance out the toxic atmosphere of social media. It was just fun for me to see the real things that people would say and also to see how many people would say similar things. I think it is important for people to be able to share the things that are bothering them and keep them from just being secrets. These people might feel like they can’t tell anyone these things or that they are such a big deal, but when I look at the answers it’s really interesting for me to see how many people are saying the same things. I don’t really want it to be about me “connecting with my fans.” I just like doing it and I want to be able to do it when I want and not as something that is a marketing tool. That takes the fun out of it.

So tell me about “Superfruit”!

Maude: I generally write songs from titles or a specific feeling you can get just from a title. I used to write songs every day as an exercise just to get as much stuff out, but now I’ve started writing more passively. So now songs just spill out completely. This one I was drawing and doodling over winter break and I just kept drawing the word “superfruit” over and over. It represented a feeling of how badly I always want to drink juice and it reminded me of summer and happiness. I was kind of sick of writing feel good songs. So the lyrics really are more about what I am actually going through like struggling at college to make small talk with people and feeling alone. It’s also about the good moments though like having a crush on someone and enjoying the sun and good weather and drinking fresh squeezed orange juice. It’s a juxtaposition of both of those feelings and acknowledging both of them. They aren’t mutually exclusive and they’re both essential to describe my identity.

The video is really fun and playful. How did you get the idea for it and how did it come together?

Maude: I don’t like posing in front of cameras, and I didn’t want to make a video where I was polished and perfect. So one of my friends on campus is an aspiring filmmaker and we just wanted to make something that was kind of a satire of what a music video should be. It was just really fun to make. I wore my favorite outfit. We asked random people to do things in the video. It’s in my dorm. It’s in the library where I spend all my time. It’s an accurate description of who I am right now and how I viewed the song in this space.

Maude: Never say a mean thing about another girl. Honestly about anyone, but specifically girls. Always lead with empathy. But also make sure you raise your hand in class. Say what you want to say! Finally, realize that Instagram isn’t real life. The archetypes you see on there of the Instagram baddies and all the Instagram famous girls. That’s not who you have to be and those aren’t the only types of people you can be.