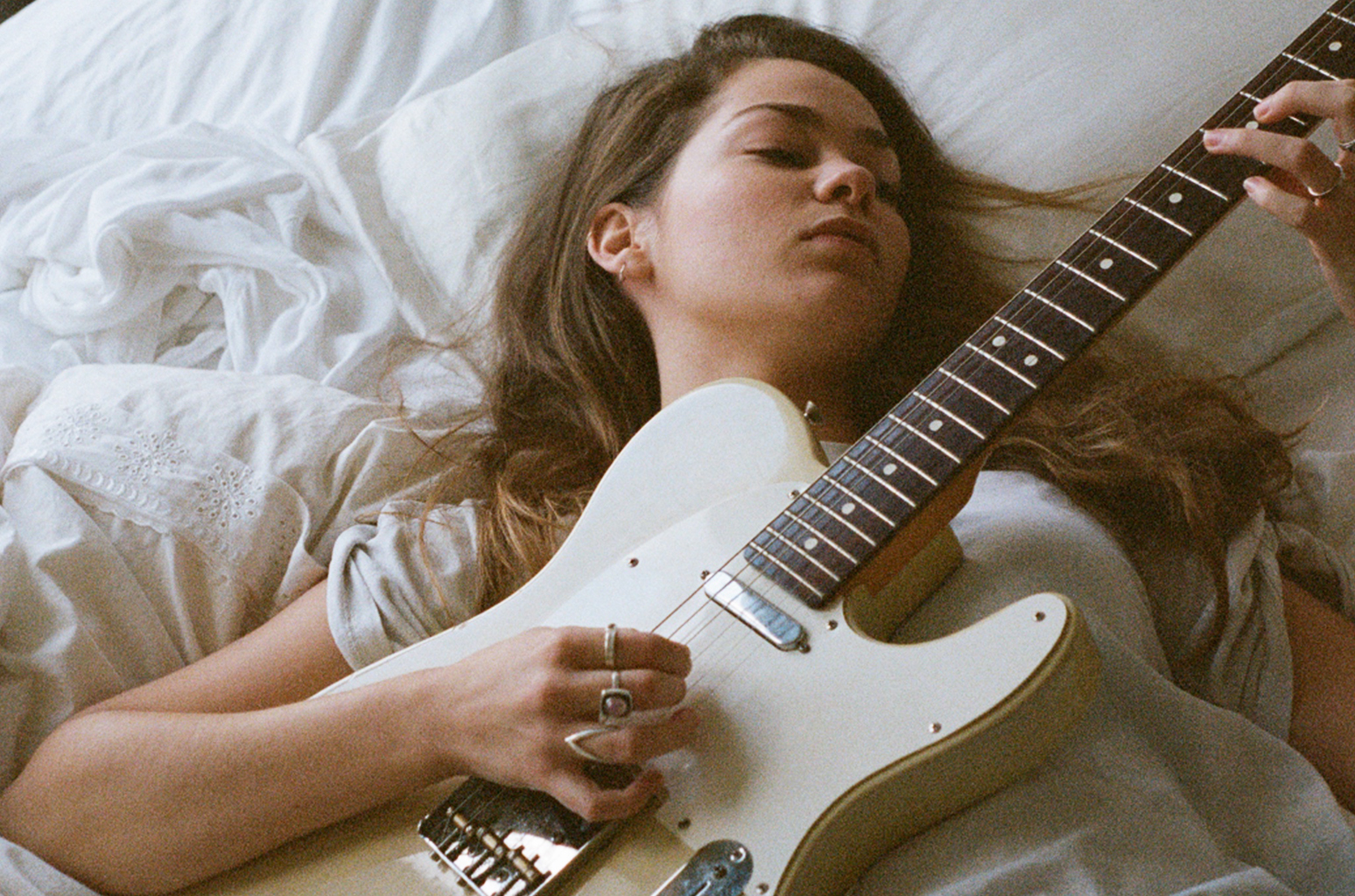 Minke's SXSW show at the British Music Embassy was so packed I could hardly see her, she's so tiny and sings the saddest songs but somehow makes it rock n' roll. In the most sxsw fashion, we chatted in an alley after her set.

So let's get started with how you got started in music.

Minke: So my dad used to play a lot, so that's where it really sunk in. And so I started on drums when I was really little, and then I went to piano when I was like 8, but I hated that because it was classical. And then I picked up the guitar at 12 really randomly. I think my friend's dad played guitar, but there wasn't really any reason. I just went and bought 30 quid, nylon, shitty, classical acoustic guitar, and then I never looked back, really. And I just sort of sat up in my room for two years and got good at it. Then from there, I got a guitar teacher who goes, "Oh, actually, you're pretty good," and then he said, "You should try and write some songs." I was like, "Uh, maybe.” And then I did, and then I was like, "Oh, wait. This is a way to get all my teenage angst out."

And you just released The Tearoom? Can you explain the title of that?

Minke: Yeah. It's a weird one, right? I've been trying to figure out what the EP was going to be. I've been writing now for sort of three years- this is my greatest hits, right? I've been writing since I was 16. I was trying to choose the songs that went onto that. When I finally had the songs I was really happy with, I listened to them back to front, and I realized that actually, a lot of them are quite sad. The lyrical content is pretty intense, and I kind of didn't realize that about myself, how much I was writing about that. So I was going to call it The Tear Room. It was The Tear Room for quite a while, and then I kind of honestly thought it was too intense, and I'm not actually that sad, so I was like, "Well, if I call it The Tearoom, it's like-- I'm British, it just adds a little layer of humor to it, you know? I love the wordplay of it.

I love that. Do you ever feel weird singing some of your personal lyrics onstage?

Minke: It's always weird. That never goes away, and it's never comfortable, very weird. It never goes away, especially the level of honesty that I put in all my songs. It's very vulnerable, but that's where the most reaction comes from. People come up to me and say, "This line helped me," or, "This really resonated with me”. That's kind of all I can do. That feels like the only way to help people for me is just to write honest songs. And then maybe people relate to it. And that's it really. Simple.

And can you tell the story behind Bite the Bullet?

Minke: That was just something that had been festering for a long time from a big sort of breakup in my life and hadn't really addressed it. I was carrying that around a lot.  It was something that obviously I just needed to get off my chest and it felt like such a relief when I did. But, yeah. It's just about strength really, being in a shit situation and owning up to whatever the situation is instead of batting it away, instead of-- yeah. Does that make sense?

Yes, it does. Do you feel like kind of when you feel really emotionally heavy about something like after a breakup or something, does it have to write right away or do you wait?

Minke: Well, it's funny. Most of the time, I actually wait and it festers and then my subconscious will sort of say to me-- it'll just come out. But “Too Late” was an example of that was very fresh and I was very angry that day and I just went in the studio and I was really pissed. And within 10 minutes, I had all ready started shouting about the situation.

I feel like there's a stigma about girls writing about relationships like the Taylor Swift thing, but I love talking about it. So I don't care.

Minke: Me too!  And I think it's really awesome. I think it used to be that way. I think obviously there still is. We're living in a man's world. Also, I think there's a lot of really cool, unapologetic, new female artists coming through that are writing about everything and absolutely don't care. And that's really opening the door for singer/songwriters like me, just like a really cool movement of women right now feeling really empowered and writing whatever they want and whether that is about breakups or being really vulnerable, whether that is just being like, "Fuck life," whatever it is. That's very inspiring to be around and be in the music industry watching that happen is really cool.

For sure. What's your biggest challenge you face being in the industry?

Minke: I mean, honestly, we were talking about this last night. It's like, there's a real-- I need to word this carefully. Being a woman in this industry, it is mainly a male-controlled industry. And a lot of the time where if a woman has written or produced something, the immediate thought is for some of these people, not everybody. There's some really good people in here, too. But there's a lot of men who go, "Oh. Well, there must be a man behind that writing or a man secretly producing that." But a lot the time it's not. Look at Grimes. She produces everything herself. And it's like, "That's great, but there's got to be a man somewhere who's doing it." And that's not the case at all. So I find that really frustrating, because I'm an independent artist. I do a lot of everything myself.

And finally, what’s your best piece of advice for young musicians?

Minke: Just keep doing it. Do not listen to anything that anyone says. I have been told a million-- I mean, oh, my god, the things that people have said to me, ”You shouldn't play the guitar. You should change your hair." The really classic stuff. You will get it. It's not this myth. People will look you in the eye and say stuff like that to you. And you just have to go, "Cool, man. Appreciate your opinion." Walk off. Keep doing exactly what you want to do, because there's a space for everyone. And if you're being honest and writing undeniable songs, they'll come to you eventually. So just keep what-- it's hard. You might have to live in your mum’s basement for a couple years. But just keep doing it, because eventually it will pay off.

Make sure to catch her on tour with Kevin Garrett!