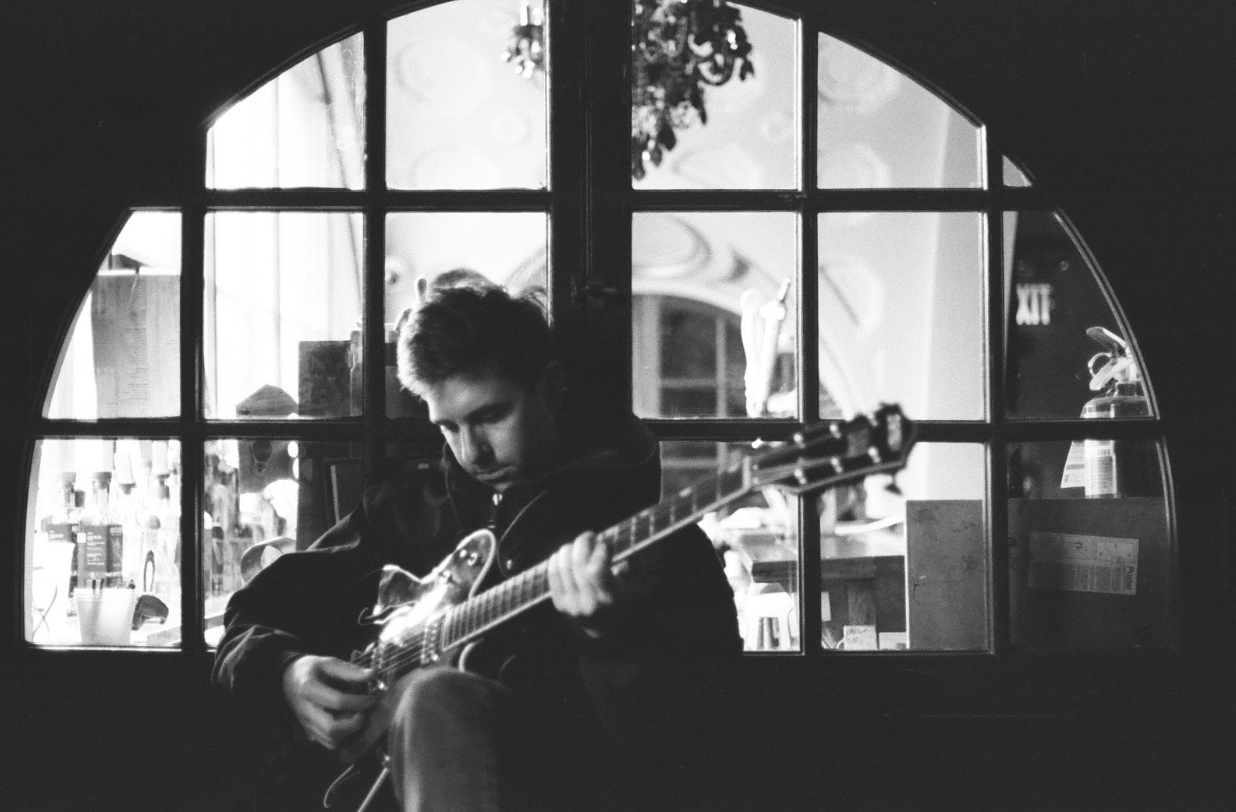 Moah is the experimental dream-folk solo project of Plastic Picnic’s bassist Marshall Hunt. Now based in Brooklyn, Hunt grew up all over the Pacific Northwest and has been making music for years—learning piano at age 4, playing in band in middle school, and eventually picking up guitar and bass in his early teens. He went on to get his BA in music with a focus on jazz at Capilano University in the mountains of Vancouver. His attention to detail along with his love and respect for a range of music allows him to create songs that evoke a strong sense of longing. His newest single Secondhand Nostalgia out on August 8th is dreamy and somnambulant as he explores sounds that are meant to make listeners feel something. He fully embraces the independence that comes along with a solo project, while taking note of the difficulties that can come along with it.

Why did you choose the name Moah?

It sounds like an old folk dreamy pop—not really. It’s just my initials. I figured if I was going to name the project something why does it have to be my name? That’s so boring. I think it works really well for some people’s vibes, but I was going for something a little more on the lo-fi experimental side. I also don’t really like showing my face ever. I didn’t want to do the guitar swung over the shoulder ‘I’m an acoustic guitar guy’ cover either ‘cause I’m a pretty private person. I’m uncomfortable with social media. I’m uncomfortable with all sorts of stuff. Doing this kind of thing in a way where I am actually comfortable is pretty tricky for me and I think the alter ego thing helps.

What made you decide to start releasing your own music now?

In college, I didn’t really make very much of my own music. I always wanted to, but I focused on learning how to play the instruments. Then I focused on learning theory inside and out and playing other people’s music so I could really learn how to arrange. I started creating my own work at the end of college and after, but all of it sounded so bad to me. I hated everything I was doing and it took up until now to get comfortable with it. I’ve been making it for years now and I just wanted to get the ball rolling. I don’t really plan on stopping. All of my idols kind of just keep releasing music throughout their life. Bill Callahan’s career is one that I think is really cool. He just released weird music for the first 10-15 years and then once he was in his mid-forties people finally started noticing him. His music to me is the most authentic and cool stuff.

That’s a good transition to this next question. Who and what are some of your main influences? How would you describe what you are trying to make right now in terms of genre and sound?

I guess to be honest I’m still trying to figure that out. I think some of the songs are just going to be what they are. I want it to feel authentic and true and honest to me. Bill Callahan is a god in my eyes. Neil Young too, but I don’t know if I can play stuff like them. I really want to blend the folk music I love with some of the post rock I listen to like Sigor Ross and even Deafheaven. I don’t know if that’s possible, but I’ll try. There’s so many it’s really hard to say.

You’ve said before that Plastic Picnic has a very collaborative writing process. How would you describe the difference between that and the process of creating for your solo project?

It’s so different. I think that is what makes being involved in music so cool is that there are all of these different lanes you can go down and you shouldn’t just restrict yourself to just one of them. You should work with other people and work by yourself. There’s a power in working alone because you are making all the decisions, which is cool, but also scary. For a band, you can write a whole verse-chorus thing, but it is going to take on a whole new life because everyone else has input and everything changes. When you’re doing it yourself, you get to the bridge and you can just end the song or just have a bunch of spacey weird jam sounds go on for three minutes if you want. It’s kind of exhilarating.

You do all of your own recording. What is that process like and what do you enjoy about it?

I have the luxury of being able to do everything by myself ‘cause I have protools and I built a little studio in my room. So I’ll get the basic idea down on a voice memo then I’ll try it out on different instruments and record through that setup and see what fits and what doesn’t. I’ll mess around trying to figure out if I want acoustic or electric guitar, but the cool part is that I can really just do whatever I want. It takes a while though. It takes a lot of experimentation to find what sounds I actually like. I think recording on your own is a good way for musicians to take things into their own hands. The big business side of it is pretty scary these days, and recording on your own is becoming the new way musicians are taking matters into their own hands. You don’t have to rely on anyone else. It creates a type of autonomy for you to just create what you want, which I think is pretty important.

What would you say is the story or purpose behind your first single Abeyance?

Lyrically it’s probably about unrequited love? It’s hard to really tell. It was a lot of stream of consciousness and then I edited after, which is how I’ve been writing lyrics lately. I’ve read a lot of people do it that way like Matt Beringer (The National), Justin Vernon (Bon Iver.) I tried to make the lyrics a part of the arrangement. So it’s less about the actual words and more about how they sound and work with the rest of the song. I wanted it to capture an emotion more than just tell you what it is about. When you listen, you don’t really have to understand what I am saying. It’s more about the feeling you get when you hear it.

Your newest single is Secondhand Nostalgia has a pretty similar feel. How would you describe the feeling you are trying to portray with that single?

It’s kind of in the same vein as Abeyance. I really can’t wait to make a whole album that just hurts the whole way through and you’re not supposed to do anything except just wallow when you listen to it. I want people to feel something when they listen to it. That’s what I look for when I listen to music. I want a feeling. This one is really about cycles of nostalgia. I’ve moved a lot in my life and I’ve basically lived in every major city in the Northwest at some point in my life. So I’ve developed this weird—I don’t know if I’d call it a condition—where you get stuck being nostalgic for where you were and don’t really live in the moment. Then wherever you are again, you’re nostalgic for the place you just were, but you weren’t really enjoying that place because you were too busy being nostalgic for the place before. You do this thing where you’re just yearning for nostalgia. You just want to exist in it forever. It’s like you want to move because you want to be sad again. I think it can also relate to different phases of life and not just moving.

What have you been listening to lately?

I really love Big Thief’s newest album. The guitar parts are insane. I also really like Tallest Man on Earth’s new album, and Bill Callahan’s new album. I always come back to Boxer by The National. I really loved Snail Mail’s album last year. It’s hard not to love that. It’s probably annoying to say Phoebe Bridgers, but that album is just so good. Everything Noah Gundersen does, and Julien Baker. Nils Frahn for some more ambient stuff as well as Jogging House.