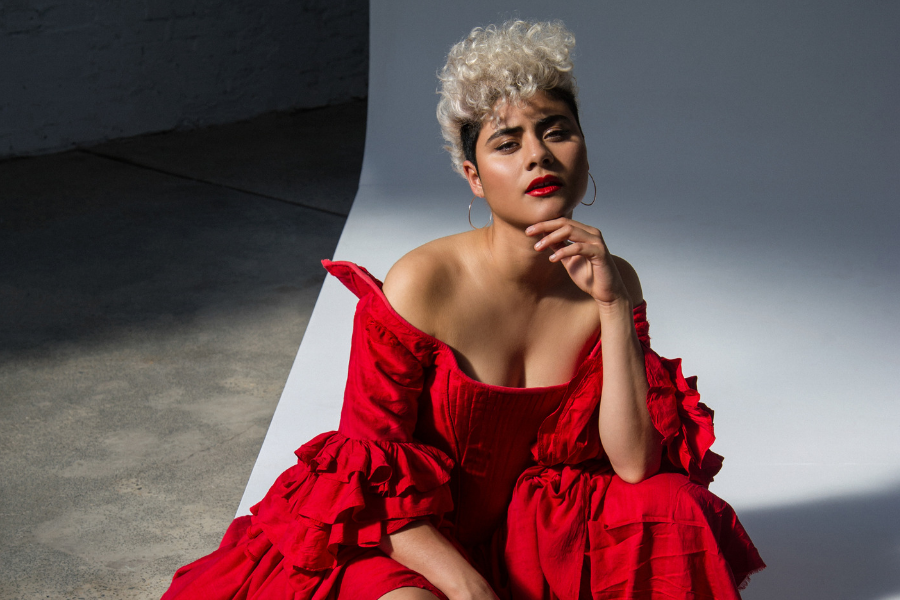 I was first introduced to Montaigne through her song "Till It Kills Me" and I was awestruck by her powerful voice and poetic lyrics. Her new song "Ready" continues that theme, but this time she tackles climate change and the optimism of advocacy. It's her anthemic call-to-arms that is exactly what we need more musicians to do, she doesn't shy away from the fight.

Montaigne: Professionally, it was an accidentally on purpose kind of thing where I was writing songs and always wished I could do it full time but had resigned myself to the fact it probably wouldn’t happen. I wanted to apply for a soccer scholarship at an Ivy League college when I was 17 and so my mum suggested I properly record one of my original songs to put over a sort of game highlights reel we would have submitted in my portfolio as evidence that I have ~multiple talents~ and when I recorded the song with my friend’s brother in his bedroom studio my parents flipped out because they’re my parents and my mum wanted me to record more songs. So I ended up doing a few sessions whipping up midi arranged demos with a couple of producers thanks to my mum’s willingness to dish out for the costs and one of those songs got submitted to triple j unearthed’s high school competition where high school students get the chance to have their music played on national radio. I happened to be nominated as a finalist, so my music was being played on Australia’s beloved public youth broadcaster and things sort of snowballed from there. I’d signed with a publisher by the end of Year 11 and had done some gigs, was doing a bunch of co-writes in Year 12 and looking for someone to produce a body of work (eventually became the EP Life of Montaigne), and then at the end of my high school studies I reimagined my project as Montaigne, I signed with Wonderlick Entertainment who have since remained my management company and my recording label and the rest is history. The dream found me.

What was a defining moment for you, when you realized you had something?

Montaigne: I think it was my first gig on a big tour - the Washington tour. Performing live made me a bit nervous but I felt immediately good at it and fell immediately in love with it, that’s when I knew I think.

Tell me about “Ready” what’s the story behind it?

Montaigne: Well, there are a few stories about it because the story’s changed over time for me. When I wrote it, it was about me and the co-writing artist feeling frustrated about how difficult it is to feel like anything you’re ever doing in the industry is enough - a feeling which is I think pervasive and certainly not limited to the music industry - if you’re working your ass off and even getting some small or big wins, even so, the next day you wake up wondering what’s next and if that’s the peak of your career.

It evolved once I started taking greater notice of how deeply tangled our political and justice systems are. I’ve always been passionate about nature and environmental justice but I’ve always let internal issues get in the way of really being an advocate for the things I care about. I had to deal with a lot of shame and fear of being in the public eye as someone who didn’t like their body or even their personality much in the first few years of my career, I couldn’t really find the energy or the zeal to be utterly invested in being a spokesperson for the causes I care about because I was too benighted by my own shit; moreover I was struggling to stay afloat financially because I was doing it tough with time and work and Australia’s welfare system is certainly one of the better ones in the world but I was in a pretty rare position which made it difficult for me to get financial support when I needed it most. Now that I’m settled and I’ve gotten comfortable taking off the armor (as Brené Brown would say), developed a greater propensity for empathic thought and am more or less socioeconomically comfortable, I’m able to start paying attention to politics and news and knowing what I know now, for me it’s hard not to do or say anything when you’ve got the platform I have. This song’s become a sort of bittersweet anthem about being fucking furious at all the corrupt people and forces acting with power in this world. About the terrible systems in place to prop them up further and to squash the remaining poor, diverse, overworked majority, and in response, we’re feeling ready to rise up against them despite the odds not necessarily being in our favor.

Why is it important for artists to comment on political issues?

Montaigne: It’s important because we have influential voices. People, especially young people, really listen to their favorite artists and actually act on things that they do or say publicly. We have so much power and I personally feel it’s a moral imperative to use that for the maximum good. I just don’t know how one could not want greater harmony and justice in the world. If I or any of my peers can help catalyze the achievement of those nebulous objectives, I find it difficult to see why one wouldn’t try if they were at their fullest capacity (I say this knowing that a lot of artists are very introverted and again, dealing with the shitstorm that is being a flawed human like everyone else but being in the rare position of being very public - I still struggle with that every time I have to Be Montaigne somewhere, it’s scary, and I understand why some artists might not yet be ready to get involved in public conversation related to politics or activism etc.).

What’s been one of the biggest challenges for you?

Montaigne: Being public, for sure. A gift and a curse. There’s one side of me that loves that I get to use my voice the way I do, for good, and to share my musical creations. I believe in them and I believe in the message I try to convey and I’m glad I get to do that. But there’s another side of me that is introverted and quiet and likes to be private and doesn’t like a lot of the events that she has to go to because they’re too big and loud and there are too many people. I’m an early night/morning kind of person and gigs are late and you get very little sleep and you kind of have to be the emotional support for fans sometimes in a way that is very taxing. I want to be there for those people but I am only human, no matter my attempts to be superhuman. And I am a human with a very low threshold for social intensity. I love that I’m a role model but I’m also not super well-equipped to be that for people in regards to my temperament. I can stretch for sure, but…you’ve really got to stretch very far when you’re a public introvert the way I am.

Montaigne: Oh gosh, I’m not particularly good at advice. I’m not an expert at anything except maybe singing, and that’s almost entirely intuitive. I think reading books by people who know much more than me is a better place to get advice. I guess that would be my advice. Bibliotherapy. Read books. The more I come to understand about the world, how humans and our societies work, and how I fit (or don’t fit) into my ecosystem, the better I am at navigating the world, having healthy boundaries, knowing what I am entitled to, and being a friend to myself. I’ve learned how to get to this place from books.