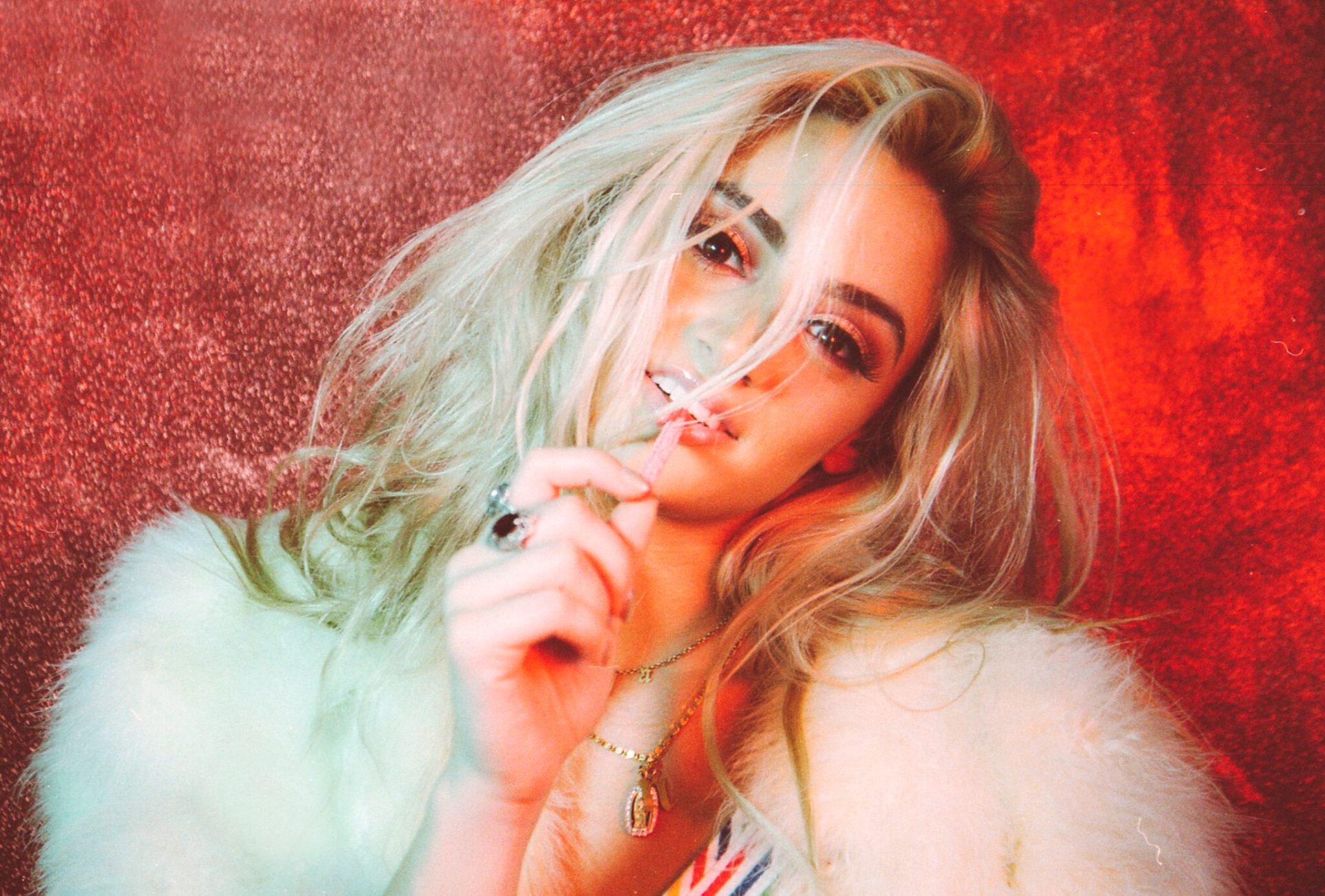 Nella Cole just dropped her new song "Sex in the Room" on Valentines Day and we love her entire vibe. We talked to the up-and-coming artist about feminism, Britney Spears, and new music. All of our favorite things!

Nella: I got started in music by singing and playing piano when I was about five-years-old. My parents signed me up as an after school activity and I was very shy at first and wouldn’t sing in front of anyone. My music teacher used to tell my parents that I was a good student, but then I would get bored and ask to eat cookies and play with his dog haha. I was kind of into a lot of things as a kid like fashion, theatre, art and acting. I took a lot of music and theatre classes in school and I started writing poems in high school. Then one day something just clicked and I wrote my first real song. I started working with producers after that and have been working on music ever since.

We love the God Is a Woman video you did - Can you tell us a little bit about how you got the idea?

Nella: Sure! Sometimes when I’m listening to music other songs that work with the track will pop into my head. This was one of those moments. I wasn’t trying to make a mash up I just happened to be listening to “Radio” by Lana Del Rey and the God is a woman chorus just came to me and I knew it would work. I wanted to make a video but I always find it kind of boring to just make a video singing in the studio so I started brainstorming. The song has an awesome message so I decided I wanted to use it to showcase some awesome ladies. I started thinking of all the women who have influenced me and realized a mash up of video footage would be really cool. I enlisted my friend and bad-ass babe, Aleigha Spinks, who is a beautiful multi-disciplinary artist. I had sent her a short edit of what I had in mind and she just went to work. I had tears in my eyes when she showed me the final video. It was so beautiful and I was so excited to showcase women in such a powerful way. Follow her for awesomeness —> @aleighakspinks

I love how music you love Britney Spears and The Spice Girls! Why do you love that style?

Nella: Those artists were some of my fist big influences! Their music and fashion was iconic, and that whole style is really coming back around now which is super fun to play with as an adult. I always say I’m like one of The Spice Girls because some days I feel sporty, some days I feel posh and so on. I love it, because it means you don’t have to be any ONE thing. You can be many things all at once and express yourself differently from day to day based on how your feeling. No rules!

What has been one of the biggest challenges you’ve faced in your career?

Nella: One of the biggest challenges in my career has been understanding the nature of the business and how it comes with highs and lows. When I was younger and new to the business, I didn’t understand that there can be times when work is very slow. I used to take this personal and believe that it had something to do with me or my talents. It wasn’t until I gained more experience and started talking to other artists about how I was feeling that I realized this is just simply how the industry works. It actually has nothing to do with anyone's personal talents. Now I understand that when you are experiencing a lull, it’s important to stay creative. Working on your own material and throwing yourself into personal projects is the best way to do that. Artists have the tendency to be extremely deep thinkers which can be a blessing and a curse. It's important to channel all of that energy into something positive to keep your mind from falling into a negative space.

Tell me about “All Out” what’s the story behind the song?

Nella: All Out is a culmination of an endless amount of adventures I’ve experienced in NYC. I love dressing up, going out with my favorite people and dancing all night! In New York you can hit the streets without any plan for the night and just see where it takes you, which is my favorite thing! I wanted All Out to represent that beautiful, free, spontaneous part of my life. The part that says it’s okay to be young, it’s okay to have fun and it’s okay to make memories. It's all about just letting go and living in the moment.

You worked with a female production duo for your EP why was that important to you?

Nella: To be honest I didn’t realize how important it was to me until after the project was complete. When I first heard about Lyre through a mutual friend, I was mostly drawn to them because they were these two chicks making music together and looking super cute while doing it haha. Then I actually heard their music and I knew I needed to work with them. Even then it wasn’t until we actually started working that I realized this was one of those “the stars are aligning” moments. Working with other talented women was just a total game changer for me. Don’t get me wrong, I love my guys- but creating music with women has been completely different because they are able to understand me on a deeper level. They get where I’m coming from and it was very exciting to finally hear my thoughts and feelings being represented so accurately through the music.

What does feminism mean to you?

Nella: Feminism means equality. I almost feel like we're coming to the point where we don’t need to profess "girl power" as much because now its like, well duh of course women can do everything men can do! I know we are still fighting that fight in a lot of ways but I think whats most important right now is looking at how we can do better with our men. If we want to teach equality then we have to do that. Young boys need to learn that its not okay or “cool" to disrespect or objectify women. They also need to learn that it's okay to cry and have feelings and express themselves. There are injustices happening on both sides. Everybody wants to change the world RIGHT NOW, but the best way to do that is to teach children a better way to be in the world.

Nella: I think the best advice for young women is to make it your business to KNOW your self worth. It doesn’t come in a text message from a boy. It doesn’t come from being the prettiest or the most popular girl at school It doesn’t come from having a ton of friends, or being the smartest or the best. The hardest thing to understand is that you are worthy simply because you are. Thats it. There is no explanation or justification. Just be a good person and follow the things that bring you joy. When you honor your self worth and stop doing things out of fear you will begin to see life blossoming around you.

Tell us about your new single “Sex in the Room” and how the song came to be?

Nella: I was in NY and had some time scheduled in a week or so to go back out to LA and work with Lyre again (we had already worked on one song together). Alina sent me the hook for Sex in the Room and I thought it sounded dope, but I was like OMG I can’t sing this haha. After listening a bunch more times my feelings quickly turned into I HAVE to sing this. I think it's important to do anything that scares you. This song is really putting it all out there and I think its important for women to own that part of themselves in a way thats not doing it for the male gaze, but doing it because its a true feeling. That being said, I think its also ok to feel shy and everything else in between. Some days I’m really out there and some days I’m more introverted with what I’m feeling. This song definitely represents the confident fearless side of myself that wants to push the boundaries. Its kind of scary but super exciting.