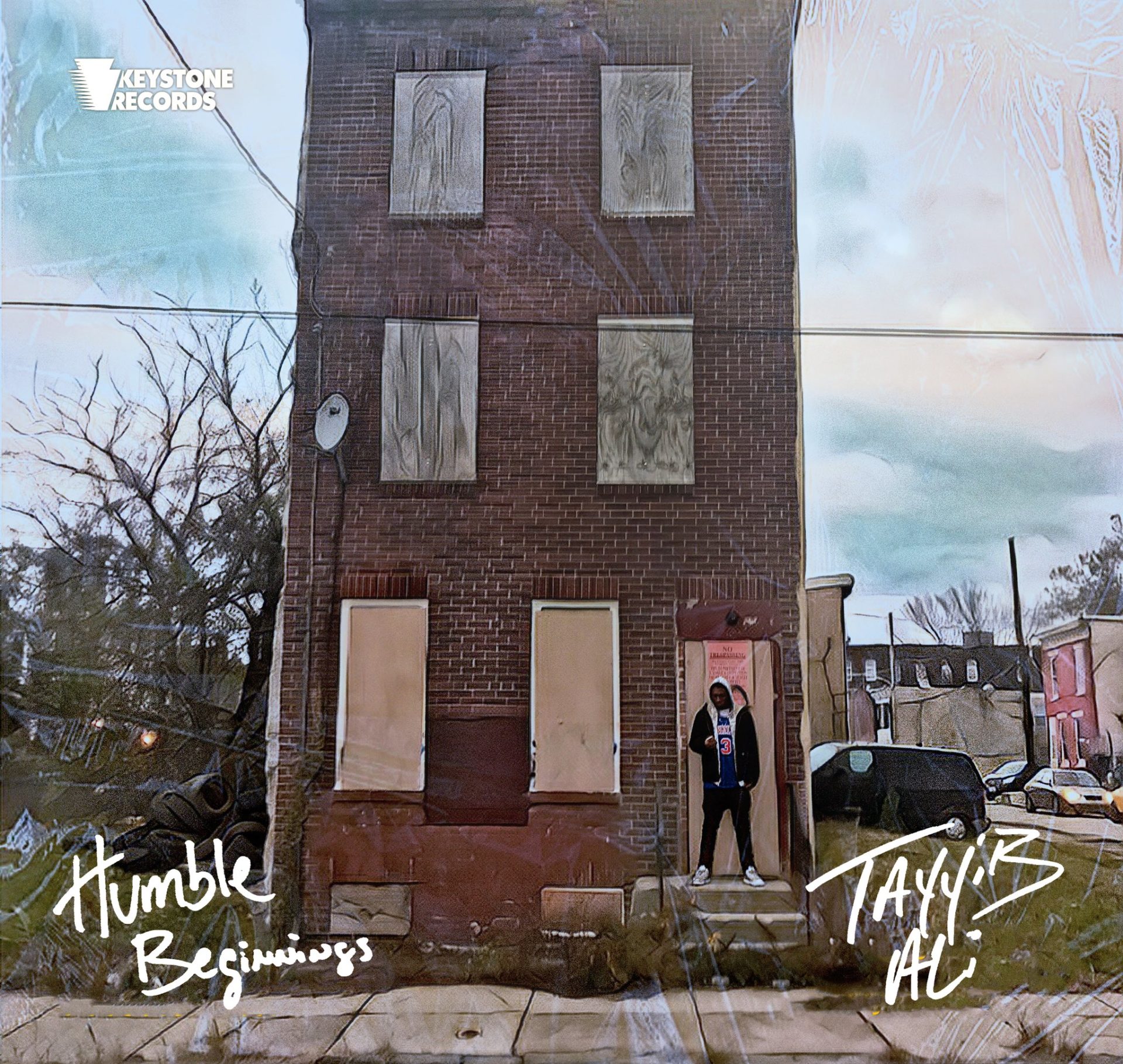 Keystone Records front runner, Tayyib Ali released a 14-track album on Friday, April 24th influenced by his Philadelphia roots. Humble Beginnings is contemporary hip hop at its finest, articulately packaged with strong verses and solid production. Ali effortlessly pulls off the underdog persona in the rap game while also boasting an experienced repertoire. From writing raps as a child, to creating a cult following from Keystone State of Mind, this project has been highly anticipated by fans.

The rapper, who now resides in Los Angeles, continues to pay homage to his hometown and the neighborhood that influenced his sound. Humble Beginnings shows Ali’s gratitude and gratefulness, but also his unwavering stamina and motivation to hone his skills.

What was the inspiration behind this project?

Tayyib Ali: Basically, I’ve been coming up for a while. I have been grindin’ and working hard. I came out here to California and I wanted to reconnect back with my city that I came from. Not even just my city, but I reach out to people who are from my area that do music and try to lend a helping hand. I am doing music with my brother. I want to showcase a different sound, a more developed Ali sound. Humbling Beginnings is the start of a new phase and new music to come. I’m going to drop way more music this year. The cover was actually shot in front of the house that I grew up in and I just wanted to do something that meant something special to me.

What do you hope for when your fans listen to it?

Tayyib Ali: I hope people like it. I’m going to be dropping a lot more music this year. I hope it shows my growth and that I haven’t forgotten where I came from.

What has been your favorite part about making this project?

Tayyib Ali: I would have to say my favorite part is working with my brother. My brother was more popular rapping than me. When I first showed my brother Keystone State of Mind, he didn’t really understand it because he was out in the streets. Then he got locked up. He just came home two Summers ago, and I went to pick him up. I have just been trying to help him out. He has always made music. So, when he came home, I made music with him. After going through so much, it’s great to make music with him. I remember when I was making Keystone State of Mind he got shot in front of my house. Remembering that my brother got shot seven times, it was a fun thing to be able to actually do a song with him and fly him out to LA. When I go back to Philly, people are actually happy for me. Even if I don’t get the love from the world like I might say sometimes, there’s always some real people that remind me that I made it real far. There are probably like 3 or 4 people from my block on the album and I feel like they really appreciate it because more people will hear them. I think another fun part was having music leftover from last year and making more music this year.

Do you have a favorite track?

How does Philadelphia influence your music?

Tayyib Ali: Growing up in Philly, everybody would rap. I just grew up rapping. My dad used to rap. That was just the lifestyle. Being from Philly definitely inspired me to go harder because the neighborhoods where I grew up, we didn’t have it that good. New York definitely inspires my music too. When I discovered New York hip hop, it really inspired me because there was a lot of real rap out there.

What brought you to LA?

Tayyib Ali: Basically, I went on tour with Cisco Adler. I was working on an album with him in LA and I just thought, “Wow I need to stay out here.” I knew it was better than where I grew up and there were more opportunities out here. I don’t really do it so public out here though because I don’t want people to think I rep Cali.

What’s the meaning behind your key phrase, “Keystone State of Mind?”

Tayyib Ali: I was making all this music and I was trying to make it big. I made a mixtape called, Eighteen. I was working on another project and trying to make a classic.  I was looking up things I could name my tape that would be legendary. Pennsylvania is the keystone state, so I had this idea of “Keystone State of Mind.” I had this idea that I wanted to do it for the whole state. I saw Wiz Khalifa and Mac Miller and I was inspired because they were being themselves.

How long have you been making music now?

Tayyib Ali: I’ve been releasing music officially for 10 years. Eighteen came out when I was 18 and now, I’m 28. That was my first official mixtape. Even before then, music has been a part of my life. I remember when I was 10 years old, I went to my first concert. It was Nas and Usher. Ever since then, I always loved music. My dad used to rap too. When I was younger, he would try to force me to rap and I never wanted to. As I got older, I started to like music on my own. It was my own choice. When I was 16, I was going to the studio. I would drop music on Myspace and YouTube. I was trying. I have always been trying.

As a talented and underrated lyricist, do you find the industry frustrating?

Tayyib Ali: Sometimes I find the industry frustrating. I never really let it get me down. I just tell myself that I have to go harder. I was in LA one time, I was working on Keystone State of Mind 4 and my friend was trying to tell me, “Yo bro, nobody wants to hear that. You have to dye your hair, put a curl in it, and do some auto-tune.” But this is what I’m doing, and this is the type of music I love to do. I never let it get me down because everybody has a different path.

What’s next for Tayyib Ali?

Tayyib Ali: I put together a new album last minute. I’ll be releasing an EP called Quarantine. I took some songs I really love and put them on Quarantine. I’ve got a ton of music. I’m going to keep releasing music. Me and DJ Grumble (Keystone State of Mind) got a whole little album. He just came out to Cali. It’s all mixed and mastered and it’s fire. I’m loving the new music.