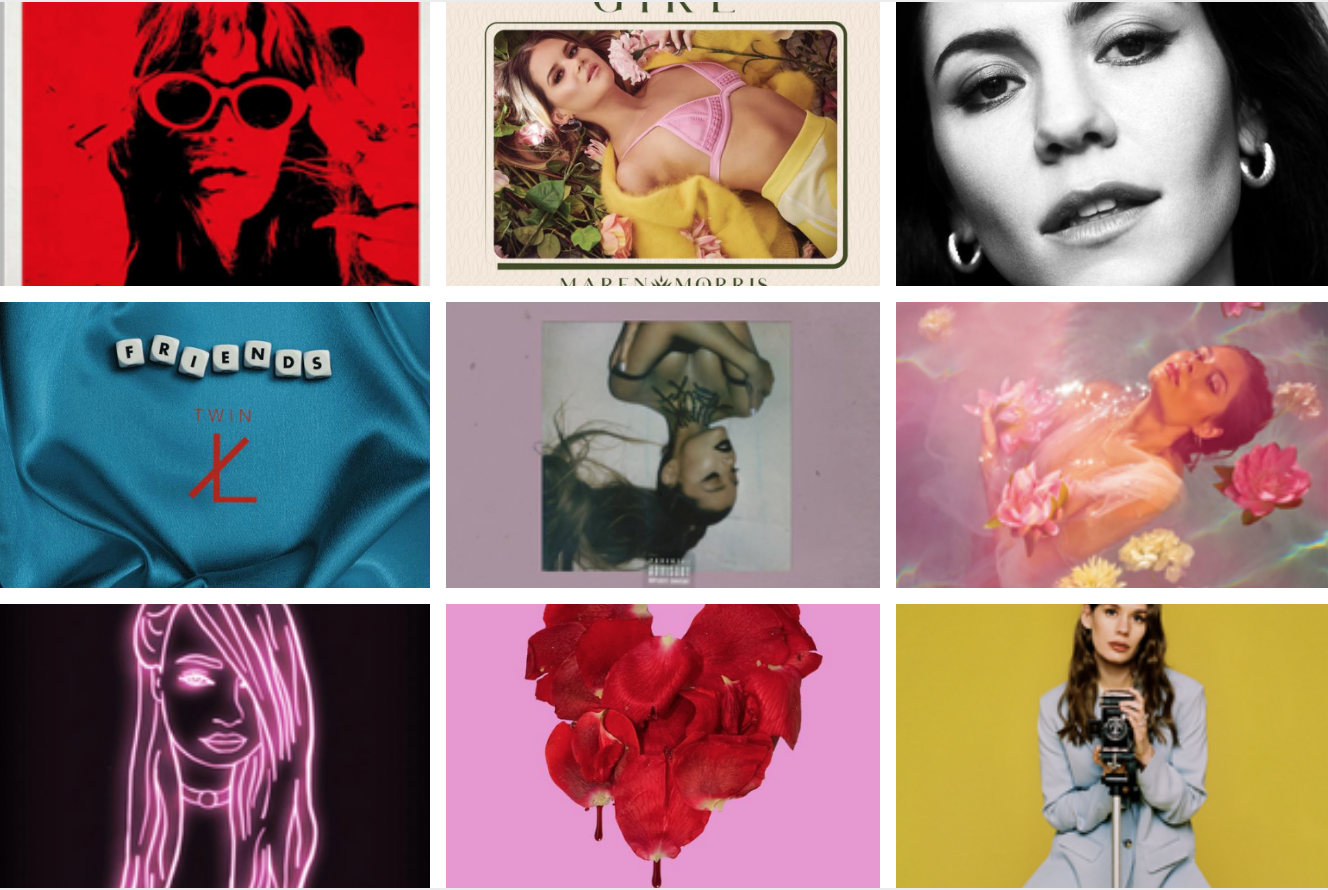 Ariana Grande OWNS 2019. She destroyed the traditional album cycle by dropping a full album so shortly after Sweetener and we ARE HERE FOR IT. There are so many amazing tracks on here that it was hard for me to choose just one for the playlist.

Ari ventures into some rap territory on here, she definitely taking some cues from hip-hop on this. The outro on "bad idea" is gorgeous. We get some relationship insight in "ghostin" but I feel like "bloodline" is my favorite right now.

She told Billboard, “When life tries you with such serious shit so many times, your priorities change. I don’t give a shit. I just want to be happy and healthy -- one day -- and make music.”

“I envy the birds, high up in the trees
They live out their lives so purposefully”

Marina has dropped -the diamonds- and is now just going by her name. She recently teamed up with Clean Bandit and Luis Fonsi for "Baby" ushering in a new era. The pop queen dropped "Handmade Heaven" and we can't wait to hear more.

Marina took a break from music for a while but she promised her fans on Twitter, "I know it's been a while but I promise this next record will be worth the wait!"

Kim Petras is changing the definition of pop every time she drops a new song. Now, she's teamed up with SOPHIE for "1,2,3 dayz up" and we can't stop listening.

The song is like bursting balloon of glitter and neon. Kim Petras said on Instagram that the song marked the end of an era. She also dropped "Homework" with Lil Aaron which has nods to Backstreet Boy and Avril Lavigne.  She also dropped the sentimental, "If U Think About Me" her version of a breakup song. We're sad this era is over but we are ready for the next one to start. Kim can do no wrong in our books.

TWIN XL says, "We really wanted to find that happy balance between writing a catchy pop song that still had a lot of depth lyrically and also had a dark sonic undertone. The lyrics in the first verse talk about our desire for isolation and the internal conflict of an introvert. As the story progresses, we find sanctuary in the presence of strangers in strange rooms completely outside our comfort zone – here, we are free of judgement and we are free to be whoever we want."

Anna of the North just dropped ‘Leaning On Myself’, her first taste of new music since critically-acclaimed debut album ‘Lovers’. Having sold out worldwide shows and amassed over 140 million streams, Anna headlines London’s Village Underground on March 25th before beginning her US tour in April.

‘Leaning On Myself’ marks a clean break from the past as much as it explores the unique way with melancholic, alternative pop that is unmistakeably Anna of the North’s own. From the shimmering, Scandinavian electronica of her debut followed a period in LA, collaborations with the likes of Tyler, the Creator, and the musical and emotional transitions that are evoked in raw but assertive style on ‘Leaning On Myself’.

Maren sings, “When it’s over, when it’s done, when we’re standing at the gates/Will we see that all along, we’re a different kind of same?” A sparse beat and synths accompany the two incredible singers.

Maren told Billboard about her upcoming album. She said, " I feel like I’ve grown up more in the years since I released that album. And this is the timestamp of that,"

I had to throw this song on here too because Nina Nesbitt deserves everything. This song is off her debut album and it sounds like it could've been from a 2000's boyband, which we know is a vibe Nina loves.

She sings, "When I was your girlfriend. You said it'd be different. You wanted all the girls. Then you wanted commitment. But you couldn't get it to to to-gether. I'm sending you this love, love, love letter."

Like seriously so catchy. Nina once told Billboard, "I grew up on pop music, thanks to my Swedish mother. So I've literally had it ingrained in my head from birth. I love anything Max Martin does, I think he's a genius. Everything is so simple but so effective."

Okay so my obsession with Lauren Ruth Ward is pretty obvious. If you haven't seen her live yet I feel bad for you, she's insanely talented.

She just dropped a ton of The Doors covers in honor of Jim Morrison's birthday and now she's blessed us with this perfect cover of everyone's guilty pleasure favorite "I Touch Myself." Ward floats over the choruses effortless crooning, "I don't want anybody else, when I think about you I touch myself."

Maty Noyes has really distinctive vocals and it would only make sense for her sweet voice to bless this adam&steve song. She told fans this was her Valentine's gift to them.

The song is so catchy and has a simple message, "I just want to be wherever you are."