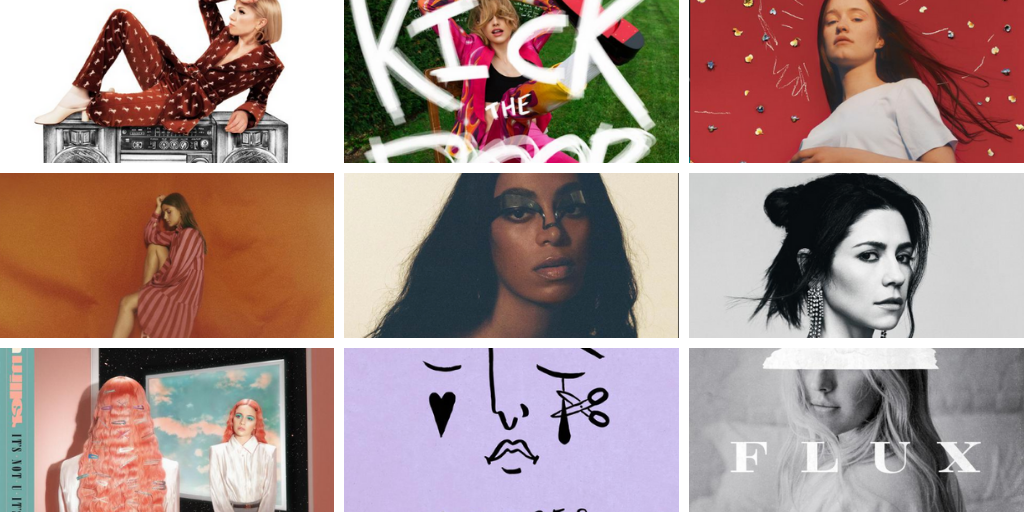 Carly Rae Jepsen is incapable of making a song we don't love. We're seriously so stoked that she's back with new songs. We needed this.

We love that unadulterated pop-love. Her new songs are a little edgier but still just as catchy. She's moved on to new love and we're here for it all the way.

Ellie Goulding is coming out with new music and we are here for it. Her new song "Flux" is an emotional ballad backed with her distinctive vocals.

She's been teasing her new album. She told Billboard, "It's much less collaborative than the last album. It has much more clarity and space. This album is the album of my voice, and my songwriting, and that's kind of what I've always wanted to do. There will be electronic influences and hip-hop influences, and the music that I grew up listening to and that I'll never be able to shake off. I've always had my own interpretation of what's happening in pop music. "

Sigrid's highly anticipated debut album 'Sucker Punch' is due next week and to tease the album a little more, she released "Sight Of You" today.

The song is a celebration of her fans. She sings about losing luggage and getting jet lag and the not-so-glam parts of her tour schedule. However, the fans make it worth it.

During a show in London, Sigrid said, “‘Sight of You’ is about when I’m tired of waking up early and having early flights. That can be quite sh*t. But, then you get on stage and I can see my band is there and I can see that you guys [in the audience] are here and that means everything. So, yeah, it’s kind of a love song to old friends and you guys.”

Sigrid is set to take her new songs on an arena tour supporting George Ezra beginning next month, and she’s just announced a huge UK headline tour for the end of the year.

Bea Miller teamed up with 6LACK to drop this shimmering new song.

Bea explained the sentiment behind the song:  “I think sometimes it’s easy to lose yourself in other people; to do things for, and with them that don’t represent who you are. There will always need to be compromise but this song is about crossing the line between helping someone else, and hurting yourself, and recognizing that when you can’t be who you’re supposed to be around a specific person, it’s time to prioritize yourself.”

K. Flay drops her new song “Bad Vibes” which slips clever quips—“You’re the sequel that sucks”—between a siren swell of synths, thick percussion, and an unshakable and undeniable chant, “You give me bad vibes…”

She says, “My best friend recently had a kid, and I was like, ‘I don’t want this baby to grow up around sad people’,” she recalls. “I saw this stupid prison-style tattoo that said, ‘Born dead’. I thought, ‘Fuck you, man. I hate this tattoo’. With everything going on in the world right now, I wanted to make some positive music. The goal isn’t to be happy every minute; it’s just to move away from negative energy. Sonically, it’s the perfect introduction to the record. Fuck being sad all the time!”

We're obsessed with LEON to a point where it's almost unhealthy. Her debut album really just makes us want to cry nonstop but in that healthy, cathartic kind of way.

Our girl Samantha reviewed the whole album but one of her favs was "Better In The Dark" she said, "This track is probably one of my favorites on her debut album. I’m a sucker for pop synth beats and the lyrics are so vulnerable. I think this track highlights the piece of a relationship when you share an intimate connection with someone and it’s a piece that not everyone understands or gets to see."

MARINA is back with another song titled "Superstar" it’s the second track to be shared from the musician’s upcoming album, ‘Love+Fear’, following ‘Handmade Heaven’ last month.

The song features Marina's stunning vocals with a piano backing. The haunting track talks about her connection to a lover.

She sings, "I love the way we worked so hard, Yeah, we've come so far, Baby, look at me, you’re my superstar, When I'm afraid, when the world's gone dark
Come and save my day, you're my superstar"

Betta Lemme is truly unstoppable. She just dropped the anthemic "Kick The Door" and the song has us pumped.

She said, "This is the Tarantino fight scene. This song is the iconic moment of fighting the group that bullied you even if you're alone against the wall. KICK is the anthem and energy needed in a world where we have to fight to be ourselves. We are faced with so many challenges and barriers in this day and age that we never thought we''d have to experience. Just when we think we're going to be fine someone wants to put a wall in front of us. Sometimes that person can even be yourself."

Growing up in Houston, the one this we always have is Beyonce and Solange Knowles, and to see Solange return to Third Ward to release her new album means the world to us.

When I Get Home is an exploration of origin. It asks the question how much of ourselves do we bring with us versus leave behind in our evolution. The album was written, performed, and executive produced by Solange and we are in love.

Additionally Solange announced that a special event will take place across Houston’s Third Ward on March 3rd. More details can be found here.