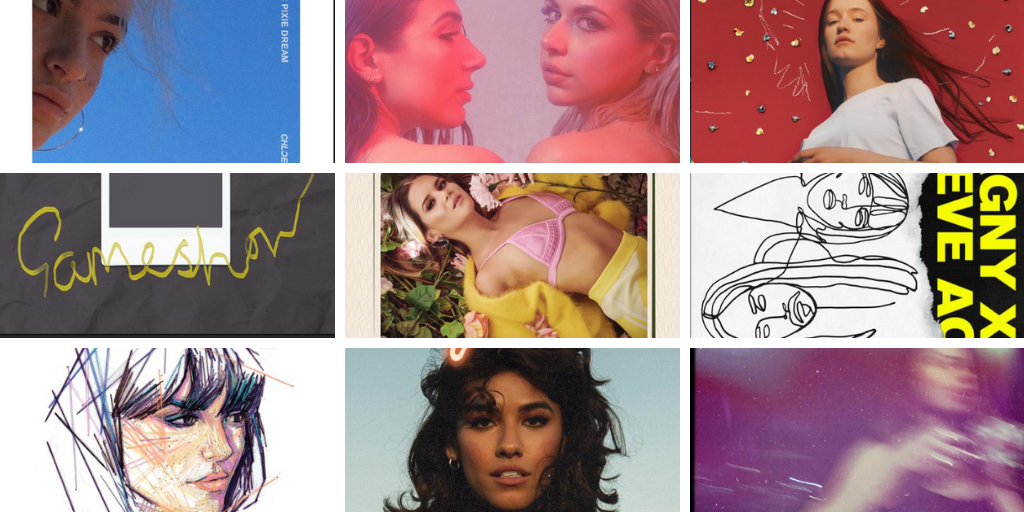 We love UPSAHL’s music so much and we’re so pleased that she just dropped her debut EP “Hindsight 20/20.” With songs like “Drugs” and “

She said, "I wrote this EP over the course of 2018 and after I moved from Phoenix to LA. I was writing songs every day and learning to be alone while all of my friends went to college and were doing college things. It was my first time away from home. I was discovering so much about myself and my relationships with people in my life that my days writing songs in the studio turned into sort of therapy sessions. I would just spill out whatever was on my mind on any given day. Hindsight 20/20 represents my reflection on this past year and all the experiences I had."

Catch her on tour with Max Frost!

If it seems like we're obsessed with Sigrid, it's because she's yet to drop a song we don't absolutely love. Her debut album Sucker Punch dropped today and we'll be playing it all weekend.

GIRL, the new album from superstar Maren Morris, is out today—International Women’s Day. The album, Morris’ second, features history-making title track “GIRL”—which had the highest debut on Billboard’s Country Streaming Songs chart by a female artist and the highest weekly streams by a female country artist ever—as well as Brandi Carlile collaboration “Common” and “The Bones.”

GIRL comes three years after Morris’ breakout debut album Hero and explores how her life has changed since then—a skyrocketing career, falling in love, becoming engaged and then married—and the highs and lows in between.

We love RUUMER and their cheeky take on women's sexuality. Their new song "Downtown" is out today and we are digging the vibe.

They said, "'Downtown' is a dreamy pop record about going “downtown” in more ways than one. We’re Gemini’s, so we love a dual meaning. We used the word “Downtown” as a playful sexual innuendo, referencing our love of downtown New York City while also referencing going 'downtown'. Like all of our music, the record is all about empowering women and our sexuality."

I remember Dagny performing this song when she opened for LANY ages ago and I was WAITING for this release. I also had no clue it was a collab with Steve Aoki.

The chorus repeats the line, "You know I'm coming back to you like a bullet."

She told Harper's Bazaar that the song is a bout a close friend. She said, "He had been pushing people away, and he decided to kind of take control. It was like watching a phoenix rising from the ashes. I think a lot of people, when they hear 'bullet' in the chorus, they maybe associate it with aggression or hatred or something, but it's not about that at all," Dagny adds. "It's about wanting to come into somebody's heart again, and really make sure that they can feel that they're there."

As a self-sufficient and successful recording and touring independent musician, this EP comes on International Women’s Day as a personal celebration of her work to date and serves as an exciting indicator of what’s to come from this up-and-coming artist.“I started my musical journey from complete scratch and have been doing it for 6 years now. I’ve remained in control of my artistic direction, songwriting, production, visions and I feel so grateful that I get to share my music with people.”She continues. “When listeners, especially young girls, tell me I’ve inspired them to pick up a guitar or follow their dreams and that my lyrics connect with them, I feel like I want to burst, it’s the best feeling ever.”

Written from the perspective of the partner and the child, ‘Gameshow’ (the single) was penned by 23-year-old Jerry after the tragic death of a close family friend who died from cancer.  “It was the first person who had passed away who I had known and it really knocked me for six.” She explains. “Just knowing that she was gone, broke my heart. It felt so unfair and cruel.”

Minke is on the rise right now, and with her new release "The Tearoom" she's going to own this year.

Each song shows off her skills. The eighties-inspired “Too Late” highlights her dynamic range over a danceable beat. The tense “Another Me” doubles as what she describes as “a Peter Gabriel moment” and nods to formative progressive influences. Then, there’s the seismic “Frantic Love.” The track’s Pink Floyd-style expanse spotlights impressive fretwork on a hummable solo, reaffirming how “important musicianship is to me,” as she says.

She says, “Songwriting is my therapy. It’s what I’ve done since I first picked up a guitar when I was eleven. It’s the only thing that makes me feel better, so it’s what I do. When people listen to the Tearoom, I hope they get whatever they need from it. It could be reassurance or someone to identify with. That’s what makes me happy. It’s all I can do.”

Chloe Lilac captivated our hearts during her live show. She's so honest and genuine. She just dropped her debut EP "Manic Pixie Dream" and it'll certainly be our soundtrack for sleepless nights thinking about lost loves.

She says, “This EP is so special to me. It’s about being a young woman, coming of age in 2019 in New York City. My hope is that these songs can make a connection for anyone hearing them, and can help them get through it all and feel something. These song are deeply personal to me, and I’ve worked on them for almost 3 years now. I’m really excited to finally be putting them out today, especially on International Women’s Day!"

Charlotte OC just dropped her new song "Boyfriend" and we can't get enough.

Shes says: “Boyfriend is about the dating game and the process you go through when you’re trying to find the one. And then you realise, actually I don’t even want a boyfriend so why am I even doing this.”