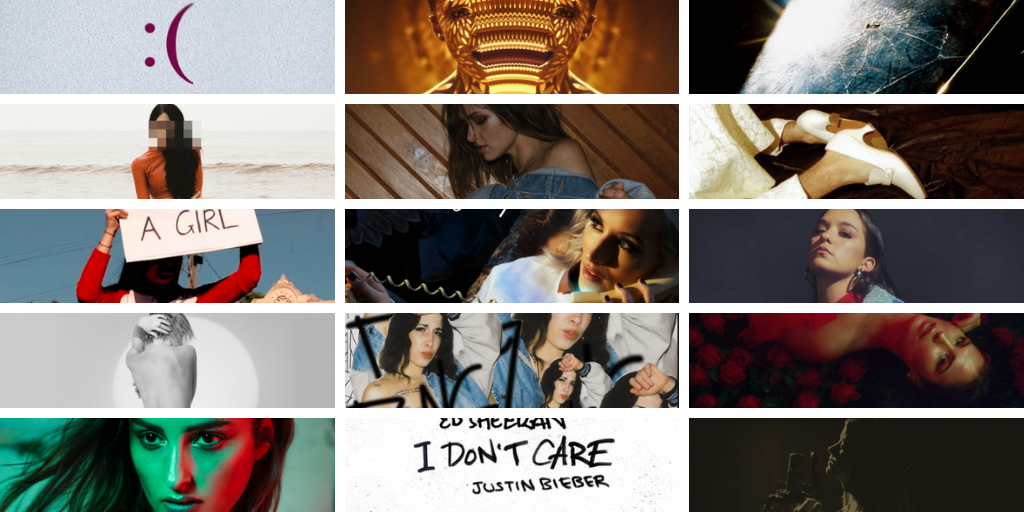 LOVE ME SOME BANKS! Guys, I am STOKED that we have new BANKS. I love all her dark-pop so much and I've been waiting. WAITING!

"Gimme" is just as edgy as you would expect, her mesmerizing vocals drift over sharp beats.

“’Gimme’ is a song about getting what you want,” Banks said of the single in a statement. “It’s about knowing what you deserve, saying it out loud, and demanding it with no apologies. I’m ready to release this into the world and begin a new chapter.”

This gorgeous new anthem from Wilsn is everything.

WILSN explains: "I felt compelled to write 'Fight Like A Girl' after a spate of male-led songwriting sessions where I felt like my opinions and talents weren't being respected at all. It was like I was just the extra person in the room who wasn't worth listening to. I needed to work twice as hard to prove myself and I was put in the 'too shy' and 'untalented' box before I even had a chance to open my mouth and sing. It was basically mansplaining at it's finest. I know this experience is so relatable for all women in all walks of life and I wanted to write a song that myself and women around the world could use as a sort of fight song to ignite strength, courage and support when it's needed or when we’re struggling to stand up for ourselves. When people say 'you fight/run/throw like a girl' it used to mean that you were bad at those things, insinuated that women are weaker and the standard is lower. But lately with all of the Womens' Marches and protest signs we’ve been seeing that out-of-date saying has been flipped to mean the exact opposite.

The highly anticipated Bieber Sheeran collab is finally here and it is easily the song of the summer. The two pop stars just churn out earwormy hits nonstop so none of this surprises anyone.

The carefree chorus puts it plainly, "'Cause I don't care when I'm with my baby, yeah/All the bad things disappear/And you're making me feel like maybe I am somebody/I can deal with the bad nights."

The "ooohs" that follow will be stuck in your head for months.

After seven successful albums, Ingrid Michaelson was looking for a new inspiration. “I wanted to create something through a different lens,” she says. So the singer transformed her obsession with the throwback sci-fi/horror drama Stranger Things into Stranger Songs, a mellifluous reflection on the human condition—that also happens to be filled with Easter eggs.

Yet the album remains universal, most of it sweetly tapping into romance as nostalgia, beginning with its first single, the flirty, palpitating “Missing You.” “There’s something about Stranger Things that’s really comforting. It reminds me of my childhood,” she says. “It’s the best kind of escapism.”

Ingrid is also writing the music for the upcoming Broadway adaptation of The Notebook which is just so fitting.

FINNEAS returns today with the release of “I Lost A Friend.” Filled with poignant lyrics, “I Lost A Friend” perfectly showcases FINNEAS’ knack for effortless, heartfelt storytelling, paired his simplistic and rousing signature production.

Talking about the new song, FINNEAS reveals “This song was born out of a falling out I had with my childhood best friend. I’ve made a lot of music covering romantic relationships and a lot covering family but I’d never been able to articulate what it feels like to lose a friend until now. Hope this song gives you some comfort if you’ve ever felt the same way.”

LIZ HUETT!!!! Our girl right here, and "Nothing Personal" hits you hard. Her lyrics are vulnerable and accurate to any heartbreak you've ever had.

"He said 'it's nothing personal
Sometimes people just change their mind'/He made it sound so casual
Well I felt like somebody just died."

We love Lila Drew's sweet voice so much, she just accents every lyric so perfectly.

Her latest song, "numb" is featured in the new Netflix Original movie, 'The Last Summer' which is available to stream starting TODAY.

The song appears on the movie's official soundtrack album, also out now. "numb" follows Lila's previous releases, including "faded / 2 am" (featuring American rapper Goldlink), and "November." She is working on her debut EP, coming soon.

The 23 yr old Swedish artist feels strongly about promoting healthy body image, empowering women and fighting for equal rights. Her first EP, SEX which she released when she was a teenager put her on the map (she has gone on to perform at the Swedish version of the Grammys!), garnering attention for her bold songwriting and infectious alt pop that oozes with a lust for life and a rebellious attitude. The EP was an expression of herself, saying she wrote it because she “wanted to tell my own story, to discuss sex from my perspective and my own experience."

She's been focusing on music and writing these last few years, and now she's back with her powerful tunes and self-aware anthems. She just dropped a new tune, "There's No Place Like Me" ft. Big Narstie, which is the perfect tune for when you're really feeling yourself.

"Words" is an absolute bop- she explained a little about what it's about - “Words" is a song that I’ve been wanting to release ever since that hot summer’s day in the studio in 2017. It’s about a very common subject…how we very seldom dare to be open and honest with each other and how we sometimes just don’t talk with one another. I hope this song will make people open their hearts and open up to each other too.

Australia’s electronic legends PNAU are back with a shimmering new single. With "Solid Gold" the trio set out to capture the hypnotic, everlasting rhythm of old disco records. It’s a banger built to soundtrack good times but it’s also about “the love of a best friend and being able to depend on people.” They enlisted the vocal stylings of Kira Divine and Marques Toliver for the track.

PNAU have an already-legendary career that spans two decades and five albums worth of music, including their cult debut Sambanova and 2007’s beloved self-titled LP. 2017 saw the release of their wildly successful album Changa, which saw the trio go 3X platinum with the single ‘Go Bang’ and a massive 4X platinum with ‘Chameleon’, both picking up   ARIA Awards for Best Dance Release. PNAU have earned #1 US   Billboard dance chart, Radio 1 Tune of the Week, Spotify UK Viral Chart,  #1 Australian Airplay chart, #1 Shazam AU, #1 Australian Singles Chart,   and have 7X platinum certifications. They also collaborated on a remix album with Elton John entitled 'Good Morning to the Night' in July 2012.

Brasko has returned with his glam/cabaret/pop. The song is danceable as hell and dripping with innuendo.

He's gearing up for the release of his EP SEXDREAMSUPERSTAR and this song totally sets the tone. Brasko told Flaunt, "I wanted a song that moves any size room; four-on-the-floor groove, dark for the goth kids and catchy for the preppy kids, with a dash of in-your-face lyrics," Brasko said of his single.

Just as captivating as CXLOE’s previous tracks, “Low Blow” brings a refreshing new theme to her music. Rather than focusing on love, CXLOE hones in on the feeling of being blind-sided by the music industry’s ever changing terms; one minute you’re wanted, the next you’re discarded. Her intoxicating vocals flow over as she takes back control with empowering lyrics: “I used to treat you like religion. I’m done with this tradition.”

When describing her new single, CXLOE explains, “‘Low Blow’ was written after a few personal encounters that left me feeling gutted, and unfairly hit below the belt, a tactic Hollywood is very familiar with. Especially in the music industry, you leave yourself vulnerable, and in this instance an easy target. I was left feeling dumbfounded and shocked. I was caught so off guard by this that my emotions made me come across as dramatic and as referred to in the lyrics as 'psycho'.” She continues, “I channel this in the song and refer to a relationship where it’s one sided and only wanted on their terms. A low blow.”