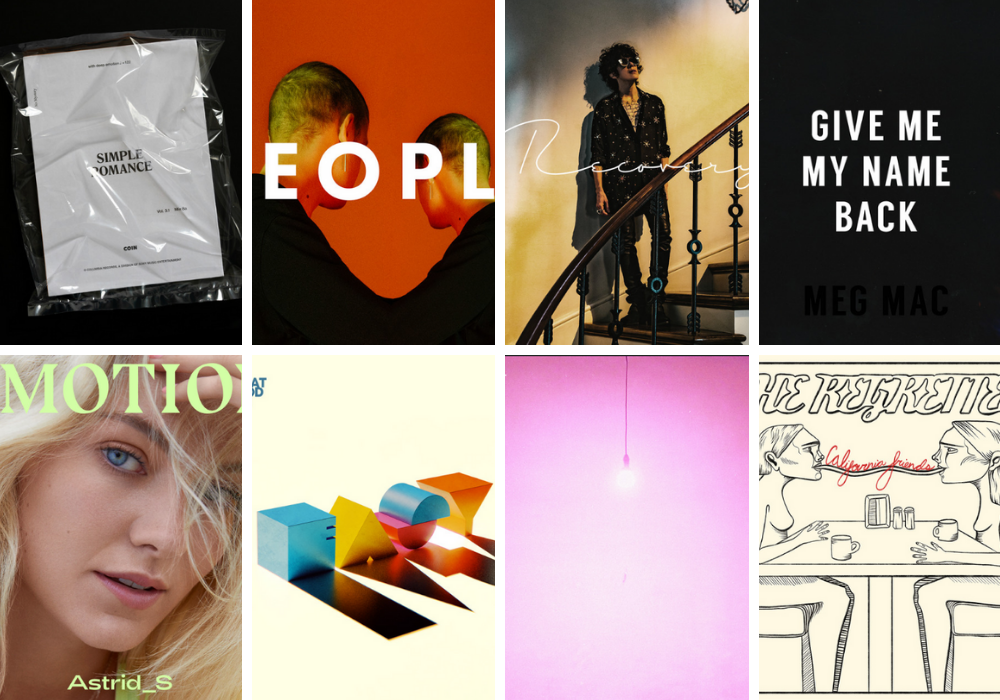 Astrid S is back with a new song featuring a dramatic piano-led production with vast drums and an anthemic vocal – an altogether more grandiose sound than has been heard in Astrid’s singles to date.

The lyrics see Astrid resilient; her stark honesty giving an insight into the pain caused by lies in a relationship.

Astrid says, ‘It’s about that sort of relationship a lot of people go through. It was written at a breaking point. Music can be like therapy when it works like that. I had this idea that I wanted to make something modern and hopefully stand the test of time’.

COIN is back! I mean they were never really gone! The indie pop darlings from Nashville just keep stepping up and dropping the catchiest songs ever.

Their latest, "Simple Romance" is about how difficult feelings can be and you need to break those walls down and let go sometimes. Just admit your feelings. Those early stages are always so confusing and pure.

Their latest "Easy" has a driving melody that is a mix of synth pop and funk. It's perfect example of their style and colorful ways.

The lyrics state, "No denying
Baby, we got way too good at fighting
We've been trying. Can we talk it out before deciding? Keeping me up all night. Tryna make it right."

LP just announced her upcoming album titled Heart to Mouth.  The new project is coming out on December 7th and we can't wait. We were so obsessed with 'Lost On You' and we love her voice.

Her new song "Recovery" is the kind of cathartic writing we expect from the singer.

She sings, "Always thought you'd be the one. Who always needed me
My home, you'd be my home
Suddenly, your memory
In time is like an enemy, so cold."

Meg Mac’s latest single ‘Give me my name back’ is a rallying cry, imploring girls to stand up, speak up and assert themselves. To feel individually empowered and collectively embolden; locked in solidarity with each other and every person whose lives have been destroyed as a consequence of mental or physical abuse. This song is about reclaiming identity, dignity and self-worth.

Meg Mac says, "Most of my songwriting is an expression of how I feel; Standing up and saying no I find hard to do – it’s still something I struggle with. I get so many messages from girls in response to my songs, who know exactly what I’m talking about and feel the same way - this is a song for everyone who has lost an important part of themselves, which they need to reclaim in order to move forward with their life”.

The story of LINES began when Erik, Johan, Fred and Nisse decamped from their native Sweden on a mission to lose themselves in the hedonism of Berlin’s nightlife. The four friends emerged on the other side and returned to Stockholm newly united as a band. LINES was born. ”We rented a seedy apartment in Kreuzberg, dropped off our luggage there, and basically didn’t sleep for four days and nights that ended in tears and triumph - or maybe it didn't end at all.”

LINES sound is unadulterated euphoric nihilism expertly distilled into high speed adrenaline pop. Chaotic synths, pulsing beats and uplifting gang vocals are the signature sounds of the Stockholm-based four piece. It’s music to soundtrack living fast and feeling hard, that mainlines its way into your system. With lyrics that deal in excesses and extremes, LINES produce defiant and socially conscious alt pop that deals with themes of isolation, escapism and what the band call “obsessive and destructive love.” They return this Friday with their new song, "People" ft. Adele Kosman.

We love The Regrettes, truly one of our favorite live bands and they just have so much energy.

Their new song "California Friends" has everything. A chorus you can yell, tight instrumentation, and it's catchy af. The song encapsulates that beachy California rock that we know and love.

The band recently announced that they will be joining Welles and Micky James on Alt Nation’s Advanced Placement Tour, presented by Sirius XM and Live Nation.