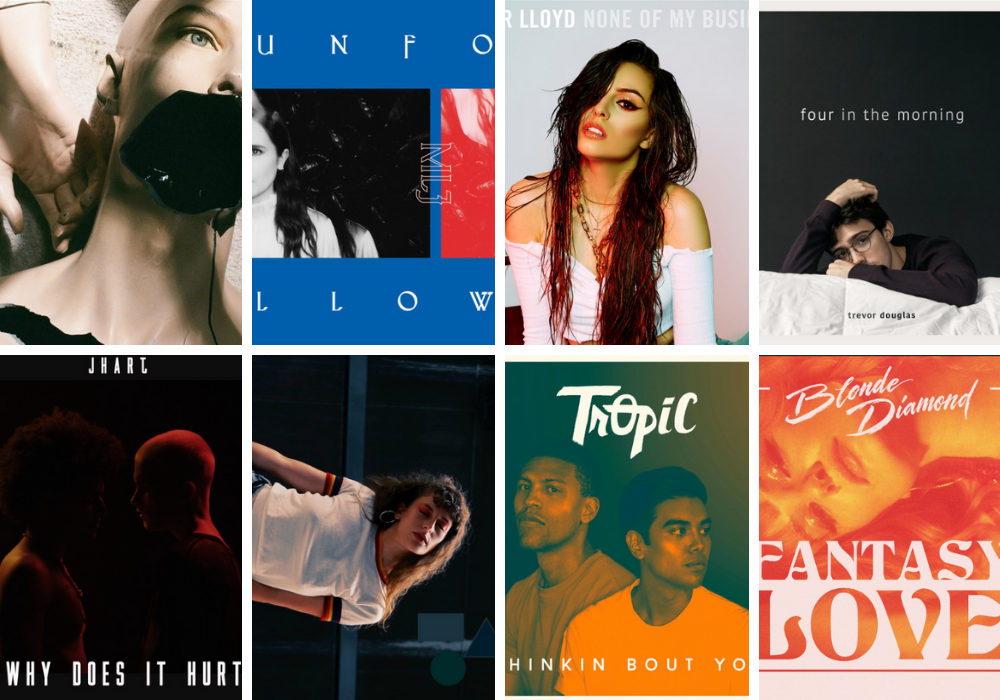 We're always here for more Kitten. Their latest song, "Oh My God" is a beautiful breakup song that drifts away from their edgy, fearless vibe and more into a dramatic heartbreak.

Chloe sings, “Oh my god/ She looks like me/ Those gold hoop earrings that you took from me.”

Chaidez told Stereogum the song, “is about all the feelings that come rushing in simultaneously when a romance comes to an end. The song began as a relatively straightforward pop track, but because it’s KITTEN we had to put it through the aural fun house! Now it (hopefully) sounds like Talk Talk and Max Martin circa ’99 did a collab. It’s a bit of a departure from this year’s other singles, but we think you’ll dig it! :)”

We'll always have Billie on our list. That's just facts.

Produced by her long time collaborator and big brother Finneas O’Connell, ‘when the party’s over’ is a slow building, minimalist track featuring just Billie’s stunning vocals and a piano.

Billie Eilish is about to head out on her sold out tour and seriously, there's nothing this girl can't do. She's 16 and taking over the world right now so get on board or you'll regret it later.

She sings, "Don't you know too much already, I'll only hurt you if you let me
Call me friend but keep me closer, And I'll call you when the party's over."

We've already talked about our love for Chandler Juliet.

She talks about her new song, "I wrote ‘tidal wave’ a month or so after I graduated college, where I really felt my adolescence was officially gone, and I felt more alone than ever. I was born and raised in Los Angeles, and while it’s a huge blessing to have been raised here in the entertainment industry, it can be very isolating and lonely in this career-driven town. Everyone has to go through the different waves of life, both the ups AND the downs. Everything is temporary, and through writing this song I discovered that I have to learn to ride the wave that I’m on, because nothing lasts forever, the good or the bad."

Today marks the return of GRAMMY-nominated, multi-platinum selling singer, songwriter and producer JHart (AKA James Abrahart), who unveils the video for his latest single, “Why Does It Hurt,” which is out worldwide today. Directed by Chuck David Willis, the video alternates between classic black and white and deep red and orange hued shots, tugging at the heartstrings in its touching depiction of LGBTQ love and heartbreak.

Written by JHart and produced by LostBoy, “Why Does It Hurt,” is an emotionally-charged soul-pop ballad about coming to terms with the end of a relationship.

JHart says, “The ‘Why Does It Hurt’ video was a hard video for me to film, and maybe harder to watch, but I rediscovered what I felt writing it and tried to convey it as best I could. I asked the director, Chuck, to leave me alone with the camera and we filmed the black and white footage in two takes. Was gratifying to switch things up and do something simple this time around, that I think truly represents the emotion of the song.”

Mr Little Jeans - also known as Monica Birkenese, wrote this track about her frustrations towards the current political administration, and details how she felt totally unprepared and shook when Trump came into office. It's kind of like a stunning juxtaposition - the song has these gorgeous melodies and synths, but the narrative is dark and speaks of coming to terms with a harsh reality.

Monica explains, "Lyrically, Unfollow was something that had been rummaging around my head ever since Trump got elected. The sinking feeling of this new, horrid reality is something I'll never forget. I was completely unprepared for even the possibility of this happening, let alone how deeply this would depress and affect me. It brought to a harsh light how much of a bubble my closest and I had been living in. It has been and continues to be a brutal wake-up call with severe repercussions for both our humanity and the environment. Unfollow is about the unrelenting mourning of losing Obama and the deep sadness and shame I felt for passively standing by while disaster happened."

Cher Lloyd has made a welcomed return today with a brand new single and video titled, "None Of My Business" Produced by Hitimpulse (Rihanna, Alma, Sam Smith, Ellie Goulding, Zara Larsson)

None Of My Business follows a newly inked record deal with label giant Universal Music and is Cher's first solo release in 2 years.

She says, “I've waited so long for everyone to hear what I've been working so hard on, and 'None Of My Business' is a perfect taste of what's to come.”

We love a good cover, especially when an artist brings their own flavor to a classic. Tropic's new cover of the Frank Ocean classic "Thinkin Bout You" does just that.

Tropic is the eclectic fusion of R&B singer/songwriter Jo-B Sebastian and electronic DJ/producer Phuse (Jarel Hill) that creates a nostalgic, yet forward-thinking sound. Their background are equally as unique as their music, as Jo-B spent two years in Manila performing residencies at the city's top clubs, as well as appearing on radio and TV.

Listen to the new song now.

Trevor Douglas just released his debut EP,  Four In The Morning.  The musician, born and raised in Texas, has spent the past few years crafting his uniquely soulful sound and bringing it to audience throughout his home state.

The project, written, recorded, produced, and mixed all by Douglas, and mastered by Paul Flint, is grounded in real instrumentation, hook-filled pop choruses, and his distinct mix of acoustic and synthy pop style.

“The idea of the title Fantasy Love came from an Andy Warhol quote,” explains frontwoman Alexis Young. “Fantasy love is much better than reality love. Never doing it is very exciting. The most exciting attractions are between two opposites that never meet.’ I have always been drawn to the tension of the imagination, and the incredible worlds that it creates within your mind. More often than not, something that you've built up in your mind is so terribly disappointing once you've had the chance to experience it in the real world. This EP pushes the boundaries of the situations I've created in my mind as a form of escapism, and gave me the outlet I needed to process how I was feeling without having to ruin everything in the real world.”