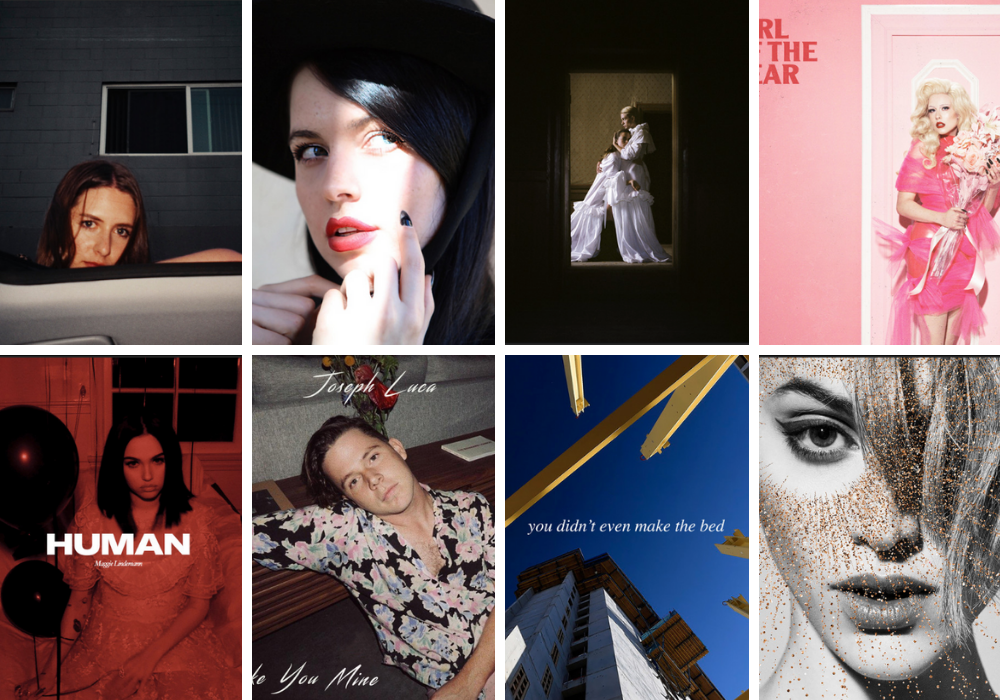 The song has a gorgeous teaser video that has Merci asking the audience, "When someone wrongs you, I mean really wrongs you, how do you react? Quick and out-of-impulse because you're hurt? What if that backfires on you? What if that makes you look crazy? You certainly wouldn't want that would you? I say wait...wait until you're absolutely sure and then well..."

Joseph Luca keeps dropping sultry new songs for us. In his new song "Make You Mine" he slows down the tempo and showcases his gorgeous voice.

The singer is a rebellious provocateur who is self-aware enough to expose and embrace masculinity’s seeming contradictions such as strength and vulnerability. Growing up in a household with a single mother Joseph was inspired by artists, such as Prince and David Bowie, that embraced both masculine and feminine qualities in their music.

He says, "’Make You Mine’ is a romantic record about what it takes to give every part of you to that someone you love. It's about what it feels like to have someone by your side that makes you feel like you can endure anything that life throws your way."

Dolores Haze just dropped their intense project with the title to match.

With comparisons to the likes of fellow Scandinavian acts Tove Lo and Sigrid, the new record sees them embark on more diverse approach to production. Blending harsh electro-pop with the occasional dreamy number, the group are spreading their wings creatively in order to deliver a release with just as much heart as it does bite.

With their single ‘FLIP’, the band channel their far darker guise, mixing harsh electro-pop with a vicious lyrical flow. The track plays as their most forceful and hard-hitting cut on this new record, unleashing the sheer energy this group are notorious for, while remaining true to their core sound.

From there, the trio let their strong personality shine through on the trap-inspired ‘Suck On My Ego’, one of the more hip-hop infused tracks for this new record. Inspired by producer Lil Pz first meeting with the band’s Groovy Nickz, claiming ’her spirit’s so high I’m getting vertigo’, the track is an ode to the diva in all of us and unrelenting confidence in just being yourself.

pronoun sings of her frustrations of a break up that ended with a messy apartment, in the new track that maintains her niche, lo-fi sound and post-punk sensibilities blended with pop aesthetics that has garnered praise from the likes of The New York Times, NPR, Stereogum, NYLON and Uproxx

She explains-,"I wrote this when I got home after an ex had just moved out and left it kind of a mess, when I just wanted to scream at the sky, when it was the final straw." pronoun explains, "It transitions from the sad, defeated phase of a break up in to the angry one. This whole record addresses that phase, the one where you're like "really...REALLY?!".

Say Lou Lou just dropped their album Immortelle, a moody and sensual presentation, which was heavily inspired by film noir and old James Bond scores. There are layers of dreamy vocals over a mixture of live music and synth.

"It was very symbiotic", explains Elektra. "We had all of these mood boards and visuals from the beginning; we constantly referenced old films and looked at clips. Parts of the album were very premeditated and structured: the vibe, the world, instruments and string references. And instead of making a music video for a song that is totally disconnected, we decided to make a song with the video in mind giving thought to both the aural and visual aspects so they're all properly cohesive."

The twins embraced the idea that an artist doesn't need to be limited to a single medium; what's important is that an audience can engage with the world the artists create, regardless of vessel. Immortelle and its accompanying moving and still imagery will attest to that and to the fact that perhaps women needn't be defined by one thing; they're are capable of many talents at once.

faded/2am’ feat. Goldlink is Lila Drew’s musical introduction to the world and her first official single, out on all platforms worldwide today. The song is a stunning, minimalistic R&B jam, featuring the critically acclaimed American rapper Goldlink.  He said,"Lila is one of the most refreshing new voices in music, and I jumped at the opportunity to work together on her new single.”

What started as a voice memo on her iPhone when en route to the recording studio one evening has quickly become one of the most intimate and soulful songs to emerge in 2018.

The 18-year-old singer said, “Goldlink has always been one of my favorite rappers. I love the intersection of jazz, hip-hop and dance in his music and was blown away when he heard my music and agreed to collaborate. He really understood what the song needed and brought it to life.”

Alterna pop princess, Maggie Lindemann returns with her brooding new track, "Human," as well as the spooky accompanying video. Perfect - just in time for Halloween - the video sees Maggie step inside a creepy haunted house and enter another world, where she is surrounded by ghouls.

She sings in almost a whisper, "I wish,I wish I was human, I wish that I could say shit like you did, Where it's sunny all the time but it's useless, nah nah, And if you saw through my eyes you'd understand why, I wish I was human."

"Girl Of The Year" is a bright-sounding dream pop track, with warm synths and grooves, out now (October 26) from pop siren ALLIE X. The song appears on her upcoming SUPER SUNSET project.

ALLIE X says, "It gets to the heart of how it feels to be making your way in the entertainment industry. It comes from the point of view of an aspiring artist singing to an executive who will hopefully make her dreams come true. Right from the start, she already understands that even if she makes it, it will only be temporary. There will always be 'someone younger' or 'with longer hair.'  The lyrics sit somewhere between a romantic relationship and a professional one. The track has a timeless, nostalgic sound where the vaporwave influences can be most clearly heard as on of all the songs on Super Sunset."

Betta Lemme is pretty impressive. She's known for her stunning vocals on Sofi Tukker's song "Awoo" and her debut "Bambola" hit Gold in Italy. She sings in French, Italian, and English so she kind of puts us all to shame.

Her song "Vagues D'Amour" is insanely catchy. Betta says, "Vagues D'Amour (Waves of Love) is the story behind this EP, which gave birth to our single, Bambola. The story is about meeting someone who makes your world brighter until you realize they're just sucking the light out of you until you're close to dead. But the lesson in all of this is to keep on dancing because we've all accidentally put our hearts in the hands of a sociopath at one point or another, right? "