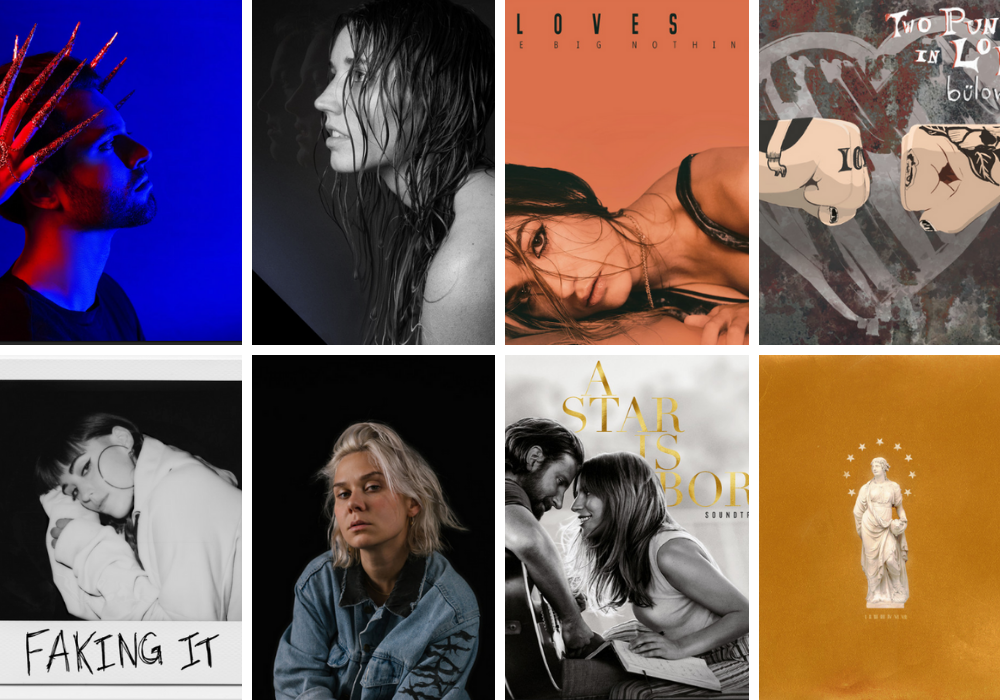 Okay so we saw "A Star Is Born" and fell in love hard. The movie made us cry big tears nonstop and this song was a huge moment. Lady Gaga has insane vocals and this just gets me.

The official motion picture soundtrack to A Star Is Born – which features new music from its principle stars, six-time Grammy Award-winner Lady Gaga and the film’s director, four time Oscar-nominated Bradley Cooper – is available for pre-order via all physical and digital retailers HERE. The soundtrack is due from Interscope Records on October 5th, the same day the film opens.

"Two Punks In Love" technically came out last week but sometimes theres a ton of stuff so, hello, this week.

bulow made waves with "This Is Not A Love Song" and this song has her feeling softer. She sings, "You broke my heart a million times
Can count the ways I've made you cry
Always such a mess
But I get depressed at the thought of losing you
We were kids, it's been a while
But you still work to make me smile."

Ames comes from a conservative Christian family, missionaries who moved to Honduras when Ames was just 13. Coming to terms with her sexual identity was difficult for her in that environment. Her new song "Hold On" is what we all need today.

"I wrote “Hold On” as a letter to my younger self, an encouragement to hold on through the difficult times I had growing up gay in a fundamentalist Christian home," she said. "I wanted to use literal images of rituals that bull riders perform “warming the resin and pulling it right” before they’re about to experience a rough ride. In the choruses I describe the love I’ve now found (my fiancé) and the realization that it was all worth it in the end. If only I knew then, what I know now."

We've been obsessed with CLOVES for a long time now and her album was a labor of love. She puts so much soul into her music and it's incredible.

Sam Kiszka from Greta Van Fleet puts it best, “Few have the ability to pair fearless audacity with overwhelming beauty & there aren’t many that wield the poetic prowess to make a soul feel so well understood. But CLOVES does it all…”

he road to the ‘Burn Mona Lisa’ EP has not been a traditional one. A former employee of Republic Records, Palmer released his debut single while still sitting behind a desk in the Universal Music Group building. With no expectations and no team behind him, his debut single “Burn Mona Lisa” took a life of it's own and rapidly amassed over 3 million Spotify streams to date. Now relocated to LA, Palmer has continued to put out a string of buzzy releases and has become a sought-after writer for acts such as Little Mix, Sam Fischer, Aire Atlantica, and more.

Following the success of a recent headlining gig at Ludlow House earlier this summer, Kyan Palmer will be playing an EP release show in NYC at Elsewhere Zone One on 9/28 with support from Ryan Egan and Yuri Joness.

We love Sasha Sloan. She is a damn poet. Her new song "Faking It" is out now and will be part of her upcoming EP slated for November.

The song is about that moment when you aren't completely into a relationship anymore and you're checked out but still present, maybe you're still faking the routine but you don't feel the same way.

Salvation is a wild-eyed examination of the Seven Deadly Sins and modern cult worship through a dark pop context. With its electronically sculpted, guitar-heavy take on pop, Salvation infuses sonic grandeur with an edgy vitality inspired by the big city grit of LA - from the rock-and-roll dreamland of Laurel Canyon to the glitzy sleaze of Hollywood to the jagged beauty of the ocean and mountains. In Salvation, Evalyn amplifies the notion of self-possession, both in her rule-defying approach to production and in the message at the heart of the EP:

Evalyn says, “One of the central themes is the idea of trying to find something to save you, whether it’s religion or a cult or anything else you might worship.”

We love SHAED and their album came out on the 21st but we have just been so into "Keep Calling."

Chelsea, her fiancée Spencer, and Max have had an extremely tight bond since High School; just last year the trio moved into a house together that doubled as a recording studio where they tracked and produced a majority of Melt – the highly anticipated follow-up to the band’s 2016 debut EP Just Wanna See,

They said, "It’s been almost two years since we released our debut ep. In that time, we’ve experienced so much - between all the touring, meeting new artists, moving in together (yes, we all live together), and getting engaged… a lot has changed. Throughout that time, we’ve been writing and recording - the highs, the lows, the in-betweens. This Melt EP touches on all those wonderful and complex experiences we've shared."