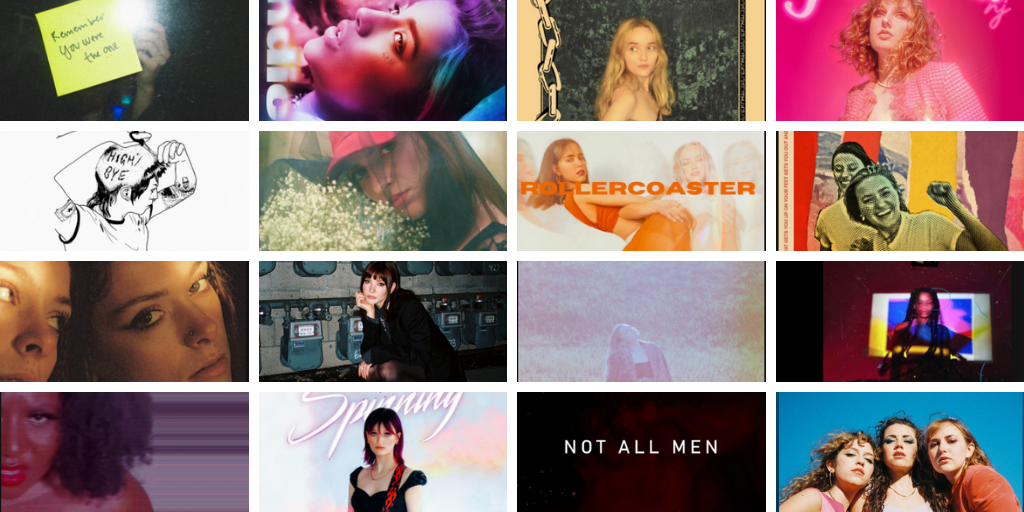 Exmiranda is a force! Her new song "Walkthrough" radiates this confidence that you just feel through the music. This song definitely shows off her skills from her rhymes to her voice, it has everything. Exmiranda is definitely an artist you need to know right now.

Aly & Aj can do now wrong, ahead of their highly anticipated album, 'a touch of the beat gets you up on your feet gets you out and then into the sun' they've dropped another gorgeous track that just proves why they're so timeless.

“There’s nothing more satisfying then sitting in a room asking the universe to humbly bring you the bones of a song,” said Aly & AJ about the creation of the new album. “We needed to show people that we were two American girls who grew up in the Valley in LA that intend on putting out positive, inspirational, but also revealing and honest writing into the world."

KTJ & Carly always deliver, with "Rollercoaster," we see a different, softer side of the duo. The more emotional, mature track explores the intense ups and downs of a relationship. Their intense vocals combined with the shimmering production shows off their ability to build gorgeous tracks with those deeper meanings we all crave.

TALIA's new ep, "headrush" is a cinematic masterpiece, each track is so hypnotic.

“My love for cinema and filmmaking definitely bleeds through in my songwriting process. It’s like building a cinematic world around my character and the words.” TALIA reflects when speaking on the EP inspiration, “As a kid I always felt an overwhelming sense of connection to my emotions. The only thing that could calm my mind were words… I found clarity and an escape through writing. Every song on “headrush” comes from my flesh. From my head to paper.”

Morgan St. Jean's viral Tik Tok song "Not All Men" just proves how sharing those personal experiences can bring people together. It makes us feel not alone.

She told us,  "'Not All Men'  was one of those songs that just fell out of me. I learned the statistic that 97% of women are sexually assaulted in their lifetime, and I saw #notallmen trending right around that same time. I was so frustrated by that and I felt like I just needed to tell my story, and show what life is really like from a female perspective. It was super honest and raw and happened very quickly."

Boys World is the answer to all of your saccharine 2000's pop cravings, it's perfectly nostalgic without feeling cheesy or forced. This EP is dripping with energy and it makes us insanely happy. If you need a boost in your day this is what you need to put on immediately.

NJ's new EP "Platinum" radiates this incredible energy that we all could use right now.

She shared on Instagram, "this project has been in the works for such a long time!!!! all i want is for everyone who listens to feel inspired, confident, & motivated. the message i absolutely love to spread is that you don’t need someone else to complete you- give all that love to yourself instead because you deserve it!!"

Demi Lovato will always have our hearts, her documentary just proved how strong she is and what a survivor she is, her new coinciding album just reminds us why we've always loved Demi. Those powerhouse vocals, the soaring choruses. It really shows her maturity and growth as an artist.

Thematically "Palms Casino" is about "letting yourself act on impulse and just owning the consequences. It's about wanting to evolve and find excitement without chaos, but knowing it's okay to mess up and explore your curiosities too." confides Valdez.