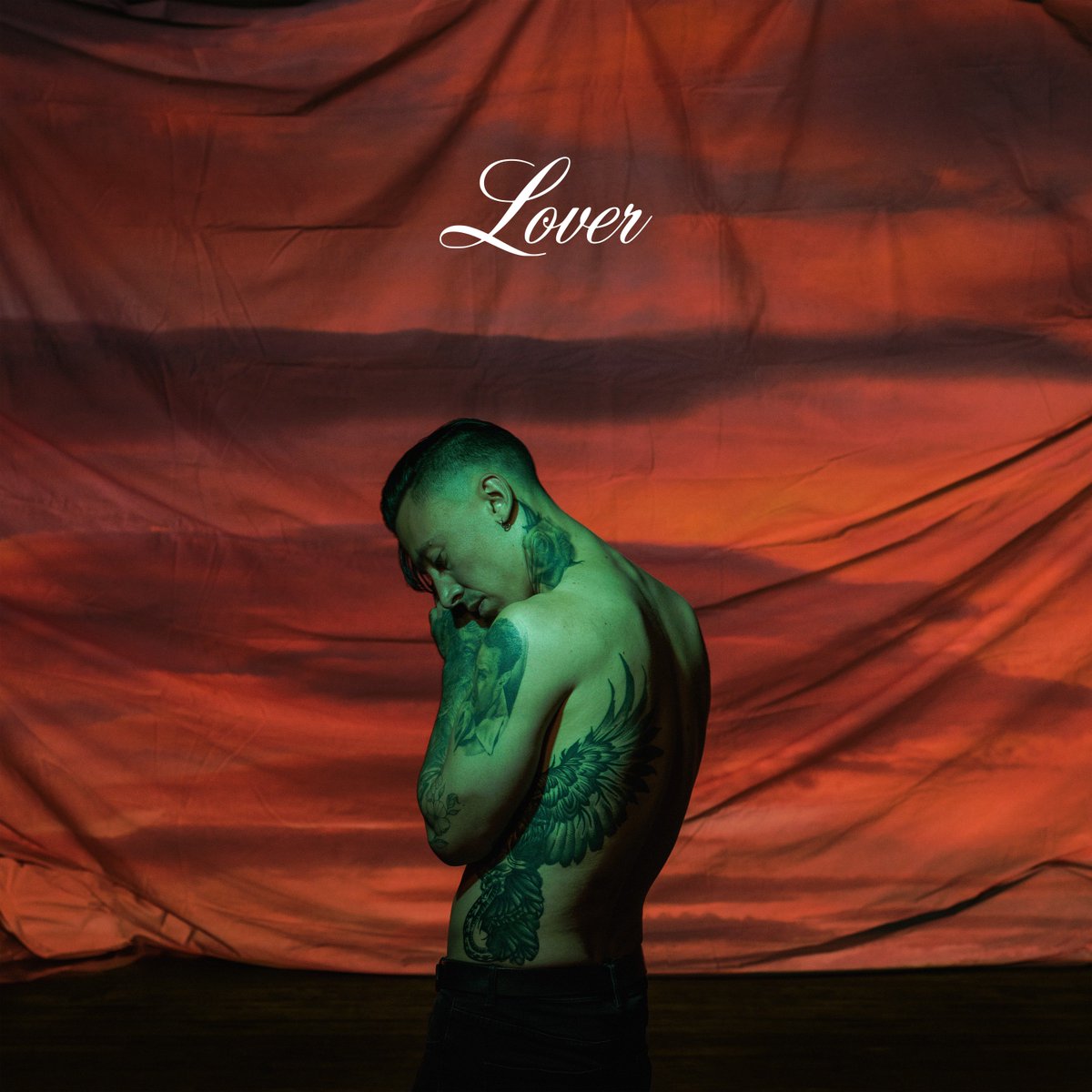 Everyone has their cornerstone artists. The ones they latch onto early and ride with through each pit stop and change in course. They are the artists that form someone’s idea of what art can be and how much it can mean. Noah Gundersen has been one of those artists to me for six years.

The Seattle-based musician has been sharing his music and subsequently his life with the public for over a decade. In his fourth full length studio album, Noah explores new sounds and methods, but the core of the art is the same. It’s about love, life, death and art. But most importantly, it’s about him.

The focus remains on the message of the songs, but there is a variety of experimentation with the delivery. In his last album, White Noise, he took a step away from his acoustic singer-songwriter roots to create something with more of a punch. Lover is a combination of that departure and what came before it.

There are some more traditional folk approaches like “Wild Horses,” “Watermelon,” and “Robin Williams,” which was the first single from the record. Along with songs that are full departures from the sound people have come to associate with him: “Crystal Creek,” “Lover,” and “All My Friends.” The later being the biggest departure—featuring 80s pop synths and a catchy refrain that wouldn’t feel out of place on a 1975 record. There are even tracks like the latest single, “Lose You,” which blend the old with the new to create something worthy of being blasted from a boombox held over your head.

The foundation of Noah’s masterful lyricism and intense emotion helps the amalgamation of sound somehow feel cohesive and right. Even the bonus tracks straddle the line of old and new with precision and poise—hinting at the past and edging towards the future.

I talked to Noah about his newest album, the accidental Taylor Swift connection and why he thinks people are so obsessed with making art about love.

Growth and change is inevitable as an artist especially since you have been releasing music since you were a teenager. Would you say you make a concerted effort to make your work different or is it more of an organic change as you’ve grown up and been exposed to new things?

Noah: I think my work has always been directly reflective of where I am as a person. So because of the nature of how we grow and change as people, my work has changed alongside that. Artists that I respect are artists that have the ability to morph and change so maybe there is a bit of intention around it.

I make my music for myself first and foremost. It has to be interesting to me, which means keeping it fresh and keeping it different. Especially with this record, I didn’t set out to make something explicitly different from what I have made before. The last record (White Noise) was far more intentioned in that direction. Then when it came to this one, I just decided to make whatever came out. Lover is just what happened without trying to push it or force it in any direction, which is also reflective of the place I have come in my personal life.

White Noise is where I first noticed you incorporating more production into your work and that continued in this record. What influenced how you approached the production style in these last two albums?

Noah: When we make art, it’s just a product of everything we have consumed and then we put our own spin on it. I think everyone draws inspiration from what they listen to—whether it be conscious or subconscious. That’s just how art gets made. You consume things and it gets funneled through your own intuition. Some of it is intentional and some of it isn’t.

With White Noise in particular, I was very self-conscious about being a singer-songwriter and I really wanted to try and break that mold. There are things about it that I wish I had done differently, but it was a part of the process for me to break out of the creative habits that I had been in before. By breaking that, I think I was able to come back to something that felt a lot more personal and genuine with Lover.

My process is really just listening and finding what makes me excited about a track. Andy (Park) and I built so much of this record in the box and it wasn’t always just me sitting at a guitar or a piano and writing. The key was to not be self-conscious about it. If it felt right, then it was good. That was the only rule.

In a letter you sent along with the album, you wrote that your therapist said “art is the self talking to the self” and you mentioned that you primarily make your music for yourself. How do you keep from allowing yourself to fall into the trap of writing for others?

Noah: I really just don’t think about it. Making music is a therapeutic thing for me. It’s a process and a way of getting in touch with a subconscious part of myself. I don’t think about what other people think of my music. If at all, I think about what people think of me as a person and as an artist. Not wanting to be labeled as a singer-songwriter was a big motivator for the last record. I think with this record I finally started letting some of that go.

You also said that some of the songs on Lover are actually old. Which ones are those and how did you approach them for the album?

Noah: “Crystal Creek” I wrote the first half of six years ago. It sat around as a demo for a really long time and I always liked it, but I didn’t know what to do with it. It didn’t really fit with what I was doing at the time. “All My Friends” is a song we made four years ago—before we even made White Noise—and that had been sitting around with a bunch of different lyrics. They were songs I had made really just for the fun of it and then I realized that’s the whole point of this thing. It should be fun. So those should be the songs I put on my record.

I made them because I wanted to and not for any other reason. They didn’t come from a place of ego. I wasn’t thinking of myself as some specific sort of artist making a certain kind of thing. I was just making what came to me and that is ultimately the most exciting stuff you can make as an artist. You can’t make something that doesn’t sound like you as an artist. It is you. You made it.

How did Robin Williams as an artist and a public figure fit into your first single, which was named after him?

Noah: He just fell into it. Like all my songs everything was very linear. One thing leads to another thing and then another. That song in particular was just a laundry list of ideas. Essentially each verse is it’s own song. The first verse was talking about consciousness and this cosmic sense of identity. Things that are in your life and your emotional process are going to make themselves known one way or another. It also touches on this idea of ownership in a relationship. Then it transitions into these ideas we have about love and how it is going to complete us, which I think is kind of an illusion. Then it transitions into my own feelings about my career and ultimately about death.

We give this status of immortality to people like Robin Williams who have made really great work, but at the end of the day they are going to die just like the rest of us. I don’t think that’s morbid. Reconciling with impermanence has been a big part of me getting older. None of this really matters that much. There is so much self-importance in art. Everyone thinks that what they have to say is so fucking important. I think the power of art is self-evident, but it also doesn’t really matter.

So chill out. That’s what I was trying to get at.

So you are releasing and album titled Lover on the same date that Taylor Swift is releasing her album with the same name. Was that on purpose?

Noah: Nope that was a total fluke. A friend of mine passed away and I was at his funeral when Taylor Swift announced her album and I was like “well fuck this is just a thing I guess.” I have never had an online mob attack me, but we got mobbed by Taylor Swift fans who thought I did it on purpose to make a profit off of her or something.

You’ve written about it a lot. The title of the album is related to it. So I was wondering if you have any idea why it is so common for people to write about and make art concerning love and love lost?

Noah: I think love validates our existence. I think feeling an intimate connection with another person—no matter how temporal it may be—signifies that we are alive and that we are not alone. Even if you lose that person. It’s one of the most powerful experiences you can have as a conscious being and a lot of the time it doesn’t make any sense at all and I think that is what is so fascinating and inspiring about it.

Art comes from the abstract. Art’s not a science and love isn’t science It’s a huge mystery and I think we try to ground mystery in art. One of the roles of art is to take the abstract and give it a face. Love is a big abstract—probably more abstract than hate because hate is really directional and there is this push and pull to it. Love is just this thing that happens. There is a lack of control and I think we are constantly trying to understand it. By trying to understand it, we are making ourselves more human and grounding ourselves in our own existence.

Maybe not even understand as much as just put words to this thing that feels like it has no words.

What art have you interacted with recently that you find exciting and inspiring?

Noah: I’m reading Ester Perel’s Mating in Captivity and Michael Pollan’s How to Change Your Mind, which is about psychedelics. I’ve been listening to a lot of jazz like Lee Morgan’s Sidewinder. I’ve also been listening to Lany, The 1975 and Leonard Cohen a lot lately.

What is a piece of advice that you would want a young artist to know?