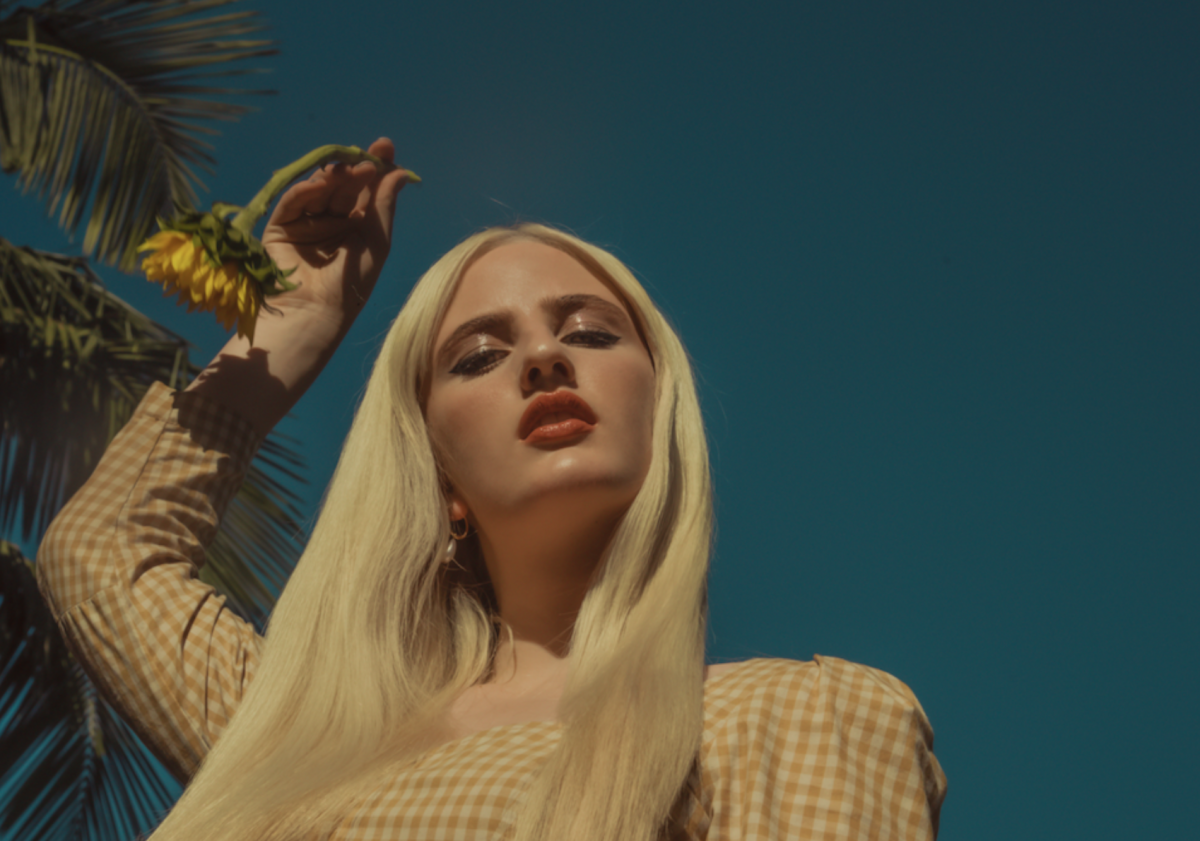 Nova Miller is a total rockstar, she arrived on the stage for LA’s infamous GeoMetro Party clad in pink velvet with her long platinum blonde hair flowing over her shoulders. After some light guitar-shredding, she climbed on top of the stage (a car filled with balloons) and went through some Ariana Grande-style vocal runs. She’s basically a Swedish pop robot designed to take over the music industry as we know it. Her new song “Do It To Myself” is a different vibe. The cover depicts a Brigitte Bardot style character in pastels with big hair. The song samples the iconic “California Dreamin’” by The Mamas & The Papas. It’s a hint of California sunshine and vintage vibes but with a modern message: stop overthinking things, you’re making yourself crazy.

Well, let's talk about your new song. I was jamming it on my way over here. I resonate hard with it.

Nova Miller: No way! Really? I'm so happy. What do you like about it, can I ask you that?

I feel like I am a crazy person in relationships. I feel like I'm always overthinking things and then I will self-sabotage for sure. And I love the line, "You don't need to drive me crazy because I'll do that to myself," can you kind of tell me about that part?

Nova Miller: Yeah, of course. I mean, I think it's pretty clear. It's pretty self-explanatory, which I love and you can kind of interpret it however you want. But it's like we think that everyone cares. We think that everyone judges us. The truth is that we judge ourselves. We do it to ourselves. You can choose to overthink and drive yourself crazy. You just have to be aware of it. You talk to yourself more than anybody else. We sometimes drive ourselves crazy before the other person has a chance to if they don't text you back you're like, "We're breaking up."

One time, this guy, he didn't text me back one time. And so I DM'ed him. I was like, "Why are you ignoring me?

Nova Miller: I feel like I've done that too! You have a whole thing in your head. A whole explanation to why that person didn't text back. And now that it's all online and you can see if people have been active on Instagram five minutes ago. And you're like, "Why didn't you text me?" You can get so much in your head, and it can get really toxic. And I think that song for me, when I really started connecting to it and the lyrics, it's kind of realizing all my toxic patterns and wanting to change them. Because I don't want to drive myself crazy.

And I think it's interesting because everyone talks about toxic relationships with other people but not with themselves. And you can be your most toxic friend. And I love the "California Dreamin'" sample in it.

Nova Miller: I love that song. It's my favorite song from the '60s, and I'm obsessed with the '60s. I love the whole-- that era I think was just in-- I mean, the world was chaotic, but the fashion was so special and so groundbreaking, and ahead of its time. And I think that's really cool. I take a lot of inspiration from that. And the music was very-- if you listen to The Beatles or The Mamas and The Papas, making music was higher because it's harder to get your music out there. So I wanted to incorporate that in my song. Kind of find a common ground between the '60s sound and still being current. Because I don't want to steal. I just want to be inspired. So, when that song came together it was like I finally found the perfect mixture of that side of me.

Nova Miller: Thank you. I feel like that gig was really fun. I love dancing and stuff. I'm originally a dancer. But I usually do more just acoustic, musical, really singy shows. So, it was important for me to have my guitar still, and let people know that I'm an artist at the end of the day.

Because you never expect pop singers to also shred guitar

Nova Miller:  A lot of guys, they play, and they're always with their guitars, and they're hiding behind their guitars I feel like, on girls, there's like another pressure to be everywhere, and like wear crazy clothes, and do it all.

How did you grow up making that voice, and the guitar, and the dancing happen?

I was born into a very creative, musical family. So like my whole-- every single person in my family is a musician. So it was always a part of my life which I'm really thankful for, because I know a lot of people don't have access to music like I did. So I just was always creative. I started playing the violin, and when I was really young, and I think with my voice when I discovered Christina Aguilera, and Mariah Carey, and Whitney. The big singers, Aretha Franklin, even James Brown, like classics that can really sing and play. I was like, "Wow." And I was just obsessed, and I used to play their music, and their music videos on my computer and I used to just mimic them, and I used to snap every move from Christina Aguilera, and just show it to my parents, and everyone, and just was obsessed.

How much do you feel like it's natural-born talent versus work ethic?

Oh, I think it's all work ethic, to be honest. It's easier, and it's nicer if you can have a talent and natural interest for music, but if you don't work for it, there's no point. You're never going to get where you want to be. You can have no talent in music whatsoever, and just be passionate, and you can learn to have good pitch, and you can learn to sing and play, but you can't learn to work. That just has to come.

What is it with Swedish musicians and pop music? Why do they just have the genetic code to make pop music?

In the schools, music is very integrated. I think in every school, you have a music class. And it's a lot of great Swedish music. And like every person I know can sing in Sweden. Or they know music somehow. I think because of that, we become very melodic. A lot of Swedes aren't strong lyrically when they write, but they're very melodic. And I think for pop music, over here it's different because people are strong lyrically and they have stories to tell but melodically it just sounds the same. So it's about finding that mix.

To people in music, it would probably be to work hard. Work really hard. And to not let opinions stress you and get to you because they can really throw you off a lot. Other people's opinions can make you really confused. Think about what you really want. Take the time to go through what you're feeling. And take the time to be with yourself because when you have that, you also know what you want. You'll attract what you want in life.