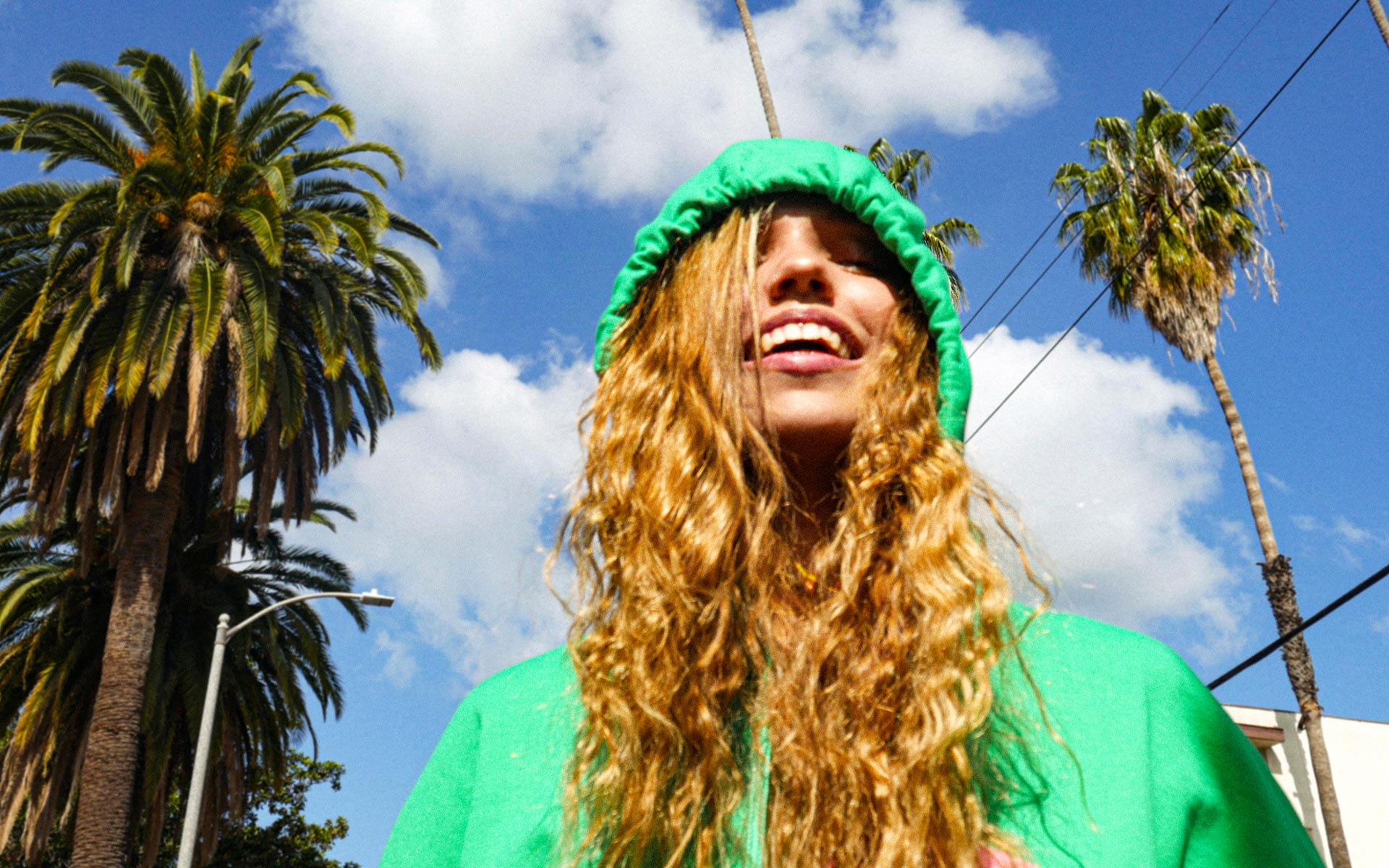 By now, you have probably already discovered the catchy pop single, “Mad at Disney”. Whether you caught a snippet on Tik Tok, or the title caught your eye on Spotify’s Today’s Top Hits playlist, there is a solid chance you’ve heard of it. The single, written and sung by rising star Salem Ilese, has already racked up over 17 million hits on Spotify. And that’s just the beginning. We recently spoke with Salem about the inspiration behind her viral hit, how her life has changed due to her newfound success, and what we can be expecting from her in the future. And she did not disappoint!

So I just wanted to start off by asking a bit about your background in music. So has this been a lifelong dream of yours? Has it been a more recent venture? How has your path led you to where you are today?

Salem: It's definitely been a lifelong dream for sure. I started singing when I was about four years old, at least that's the earliest I have recordings of it. My parents have tons of blackmail. It's very funny. And I've always wanted to be a singer for as long as I can remember. So this has definitely been everything I've been working towards.

So, do you have a specific process when you're songwriting? Are there certain ways that you get your creativity flowing or are you just struck by inspiration randomly?

Salem: Yeah. I actually usually try and start out with a concept. I feel like if I know where I'm going then getting there is a lot easier. I'm also very lyric driven and just day-to-day I carry around a list of concepts with me. So whenever I think of anything, I can just write it down. And I use those as session starters or sometimes depending on the session, it's always a gift when you can think of something on the spot together or inspiration strikes, but yeah...use stuff that happens day to day. I like to have some concept ideas beforehand and I usually start with lyrics and the melody kind of comes with the lyrics.

How did it all work with “Mad at Disney”? How did that come to you?

Salem: “Mad at Disney” was one of those special ones where we actually thought of the concept in the room with the writers, which is always so fun just because it feels really authentic to do it that way. So I went into a session with Bendik Møller, who is my boyfriend and closest collaborator. He co-writes with me on basically all of my artist projects and produces it as well. And Jason Hahs was the other writer/producer in that session. And we had never met Jason before, but we all went to school together at Berklee College of Music. We were just there at different times.

So we were very excited to work with him. And we just started by chatting for a while, catching up, getting a vibe. And we were like, "Hey Jason. How are you today?" And he was like, "Honestly, I'm really mad at Disney." And we were like, "That's funny. Why?" And it was because he had just seen the live action version of The Lion King and he didn't like it. And he was like, "I'm so mad that they keep making live action versions of all the classics. They're just so much better as the original." I was like, "Yeah, I agree. It also kind of takes away from creativity a little like the next generation is going to grow up on live action versions of all the great classics that we got to see that were animated."

I feel like it kind of loses a little bit of a charm and the magical aspect. But then we just started working on another random concept. I don't even know what it was. And so we were chasing that and it wasn't really going anywhere and we just completely forgotten about the conversation. And then we were like, "Hmm, what about the Disney thing we were talking about? Let's talk about that a little more." And then we just started kind of writing “Mad at Disney” and that was the first line we wrote. And then we played around with adding that little wish upon a star line. Yeah, it came together very authentically.

So, how has everything been for you since it... Well, I mean, it's still continuing to blow up. Do you feel like your life is changing right now?

Salem: Oh my God. Yeah. It's changing every day. It's been absolutely insane. I keep saying, I feel like I'm dreaming or have been in a dream for the past three weeks. Yeah, I feel like it happened all very suddenly. I signed with [Homemade Projects] on my 21st birthday which was absolutely surreal.

Salem: Thank you so much. Yeah, it was definitely the best birthday ever despite being quarantined. And then I think on that day, Mad at Disney had been used on Tik Tok by, I think it was 1800 videos using Mad at Disney. And my boyfriend and I were like, "Oh, that's it. This is the top. This is insane." We were so excited. My friends and I, we were like, "Oh, we've made it." And then I remember that week it quadrupled and suddenly people started following me on Tik Tok and I was like, "Oh, I guess we're going to keep on posting." So we started posting covers and it just kind of took off from there. The growth that we've been seeing on Mad at Disney has just been insane. I have no words.

How have these past few months been for you work-wise and creativity-wise, just being in the pandemic and obviously everything blowing up for you while still sort of being in the quarantine mood, how has that been? How have you been balancing work?

Salem: Yeah, it's definitely been an adjustment. As most songwriters have been, I've been trying to use Zoom sessions, which was hard at first, just because so much of a session is connecting with someone and that's definitely harder to do when you're not staring them in the face and feeding off each other's energy. But I feel like I've been adapting to it. I try and do four or five Zoom sessions a week. They're definitely getting easier as time goes on and I've met a lot of cool people. Well, quote unquote, met through the computer. So it's been great. I also live with my boyfriend, so that's very convenient because he's my favorite person in the world to work with. So we've been working a lot. And then now I've been trying to balance other things like Tik Tok. I feel like I'm integrating it into my morning routine a little. And I just got a puppy, so I wake up and I feed my puppy, and get ready, and then just go on Tik Tok, hop on some calls, and then do my Zoom session.

Since songwriting is a huge component for you, I want to ask who your biggest inspirations are and who your dream collaborations would be?

Salem: Oh, that's a good question. Biggest inspirations. I think my earliest inspiration, probably David Bowie because my dad is the biggest Bowie fan. Also my dog, his name is Bowie.

Yeah, probably that as well as the Beatles. I grew up listening to them, of course. And then in middle school, I wanted to be Norah Jones. That's all I wanted to do. I just wanted to do acoustic piano guitar music that was very chill.

And I would do open mic nights every week and wear one of those wide rim hats and just be a solo singer songwriter. And I went to Berklee and discovered pop music and electronic production and all of that very quickly changed. Yeah, now I don't know, I guess everyone I'm listening to, a lot of up and coming artists I think are so, so cool...Dominic Fike, Role Model, Alexander 23, Alex Benjamin, just some amazing people coming up in the pop scene that are so cool to listen to.

So, lastly, I just wanted to ask if there are any other upcoming projects you're working on that you can share with us. What can we expect from you next?

Salem: Yeah, you can definitely expect some fun collaborations. I have a few features coming out very soon [...] I'm going to work on a Mad at Disney music video.

The rising singer/songwriter has already racked up an impressive amount of achievements, and she is only getting started. With her clever and catchy songwriting skills, we have no doubt that Salem Ilese will absolutely be taking the music industry by storm this upcoming year. If you’re anything like me, you’ve already been blasting “Mad at Disney” on repeat for the last few weeks, and if you haven’t yet, then you absolutely need to. Be sure to keep your eyes peeled on any upcoming releases from your new fave, Salem Ilese.