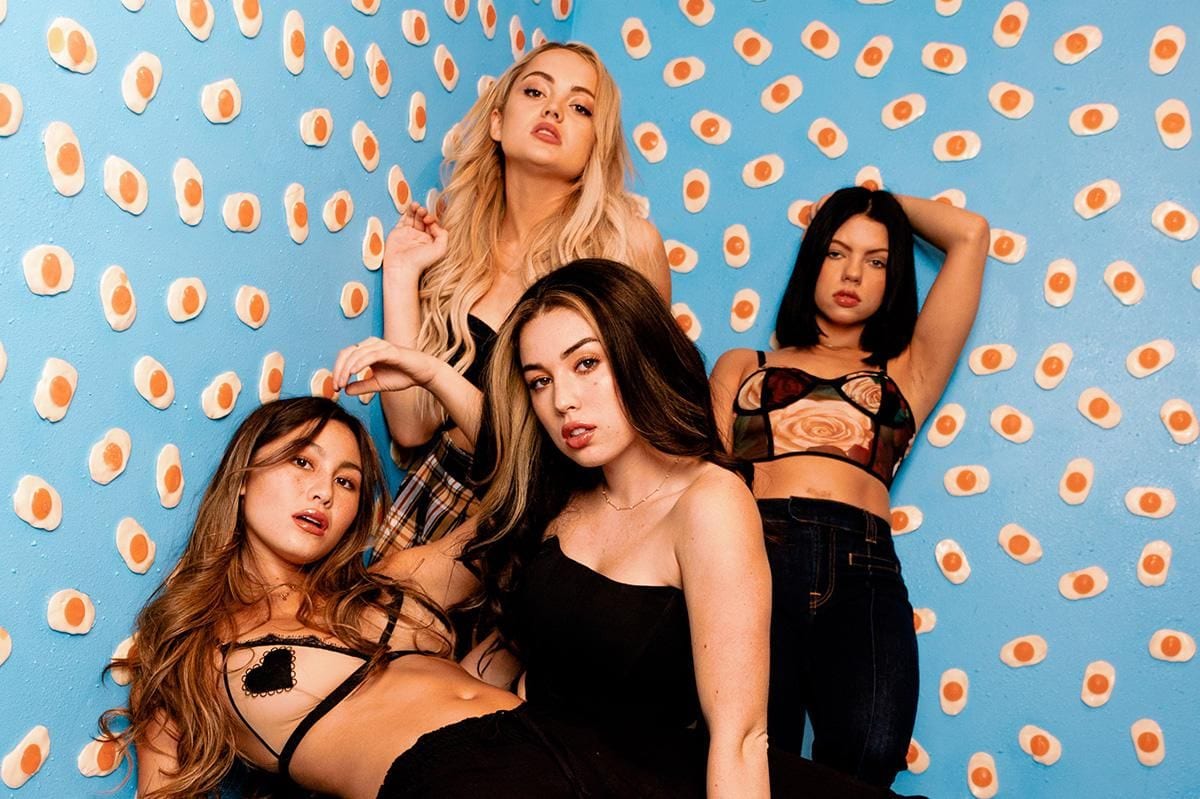 I first discovered SZNS on TikTok and got hooked on not only their music but their personalities. They feel like your best friends. Their energy just radiates through everything they do. I got a chance to catch them live, and it really filled the girl group void in my heart. The dancing, the harmonies, the attitude, it was all there. They cite all the greats: The Spice Girls, TLC, Destiny's Child, and The Pussycat Dolls as their inspiration, but they're total originals. We talked to them about the girl group resurgence, the power of social media, and the toxic environment that has always clouded the "girl group" formula.

How did you form as SZNS?

Winter: We actually all went to an audition, and they put us together. We actually danced together the first day. The rest is history.

Tell me about the audition process, it seems so interesting.

Autumn: I was working for an eye doctor, just out in LA, because I grew up here. One of my friends who I used to act with sent me this posting and was like, "You should go try out for this," and I just rolled up. I didn't know what I was expecting.

Winter: They told you to dress a certain way, heels and tight clothing.

Winter: We went through a few rounds; what she's referring to is actually the second audition because we had to film something and send it in first. Then we had another call back like two days later, and there were 6 girls, then it was us.

Spring: It's a very old school thing because the new school would be X-Factor or you're found on social media. We really came from the ground up.

Winter: It was a lot like the Spice Girls.

I feel like girl groups are having a resurgence. Why do you think that's happening right now?

Autumn: I think now, with everything going on, it's a time when we need to promote women and showcase women and make space in our lives to appreciate female artists. Our whole message and our whole thing is supporting women and being who you want and living your best life.

Winter: And realizing that we can all win and we can help each other more, and that's why I love our group so much. We all have the singular things that we're really good at, and when we're together, we form this unstoppable unit.

I feel like with past girl groups; there was this toxic attitude where people thought they were all fighting all the time and the narrative became so anti-feminist.

Autumn: I think that's just how society and our culture was, and it still is. People, when they meet us, always say like, "Who is the Beyonce? Who is going to break up the band?" The only way to promote women is by not tearing down other women.

Do you think TikTok helps show people that it makes it more transparent?

Winter: We're so ourselves; we're having fun.

Has that changed things for y'all?

Winter: It brought us together. When we first started, none of us were too jazzed about TikTok. As we got our niche down, it became a bonding thing.

Spring: It's brought us a lot of opportunities. If Covid hadn't happened, we would've been on tour with someone else, but we were all in a house, and we didn't have another way to reach people other than TikTok. It gave us an opportunity to work on our music and reach new fans.

Do you ever have social media burnout?

Winter: I'm somebody who definitely felt like it was forced, but it's about finding a niche, and then it feels fun. You have to find what works for you. You don't have to be like anyone else.

I feel like you can shift from something like "Tequila w Lime" to "Build A Boy" why is it important to show those different sides?

Spring: Well, we all want to be bad bitches, but we want to show that we all get heartbroken, and it was a sad day in the studio that day. I think we connected on a deeper level rather than the surface. It was still pretty new to us to say, "You know I've been hurt, and this isn't just fun shits and giggles all the time."

Winter: We wanted to show that we have different levels.

Is it so much fun making the music videos?

Winter: Being on stage and doing music videos is a dream come true. "Build a Boy" was crazy because it was just us. "Tequila w Lime" was a lot because we had all these people, "Build A Boy" was just the four of us and our team, and we really got to be there for each other and see each other's solo parts.

Going back to being a girl group in Covid, how has that affected your careers?

Autumn: We're making the best of it, and looking back, we had all this time to actually get to know each other. If we had immediately released a song and the next song and gone on tour, I don't think we would've had that opportunity to get as close as we are

Winter: Our bond wouldn't have been as strong.

Spring: I've learned so much in this period of time and so much that I had to face. I feel like we're strong in different ways, but all on the same level, and we know how to work together, and that's something you really have to learn.

I think COVID really tested the limits of living with people, so that's tough.

Winter: It showed us and everyone else that you can make it through hard times. You just have to look outside of the box, and TikTok was that way for us.

What can we expect from a SZNS show?

Autumn: Everyone is going to be dancing, shaking that booty, even if you don't have a lot.

Winter: We have a couple of songs that people know, and it gets the crowd into it. It's a really fun time. WE are having fun.

Spring: We're having the time of our lives on stage, harmonies, dancing, girl group to the max.

Autumn: Honestly, not being taken seriously by adults and professionals. They are like, "Oh, you guys are just random little girls, and you don't write your own music; you're a pop singer."

Winter: I get that look so much, like "What do you do?" and you say, "Oh, I'm in a girl group we do pop music," and you get that look. It pushed us to be better writers and show people we're able to write our own music and we're artists, and we'll make our name as we go.

I see that so much from older music dudes that think things that anything they don't like isn't "real music."

Winter: If someone is connecting to something, we put our emotions and things we've felt, and we hope someone can connect with it. We're putting our hearts and souls into it.

Spring: One of my biggest goals as an artist is that if you leave our show, you have so much fun that you forget about your shitty day at work, you're just here and so present and having fun with us. That's what I want to give to everybody.

Winter: Follow your dreams and don't ever give up, the world will tell you no, but that doesn't mean that you weren't meant to do something.

Spring: Don't be afraid to look inside yourself and find what you like. What makes you tick and what sets YOUR soul on fire because when you have that, nobody can tell you shit, and you're unstoppable.

Autumn: And that's something we deal with every day. When you think, "Am I doing this for likes, for streams, for views…" we'll be in the studio thinking, "What do people like?" but it's about what WE like. If we don't like our music, who's going to?

I love that attitude so much. I hate when I go to a show, and I see a band that doesn't even seem into their own music.

Spring: Even the songs that have given me trauma, I'm still like, "Yeah, this is a banger." I had all this inner fear of dancing, even though I love to dance. I had to find my sauce and take that sauce back out, and now I love it. I was just scared of messing up. Now, we're messing up in front of a hundred people, and it doesn't matter.

Winter: It's about presence, and you learn from messing up. Don't be afraid to fail. When people tell you "no," it has nothing to do with you. It has to do with them.