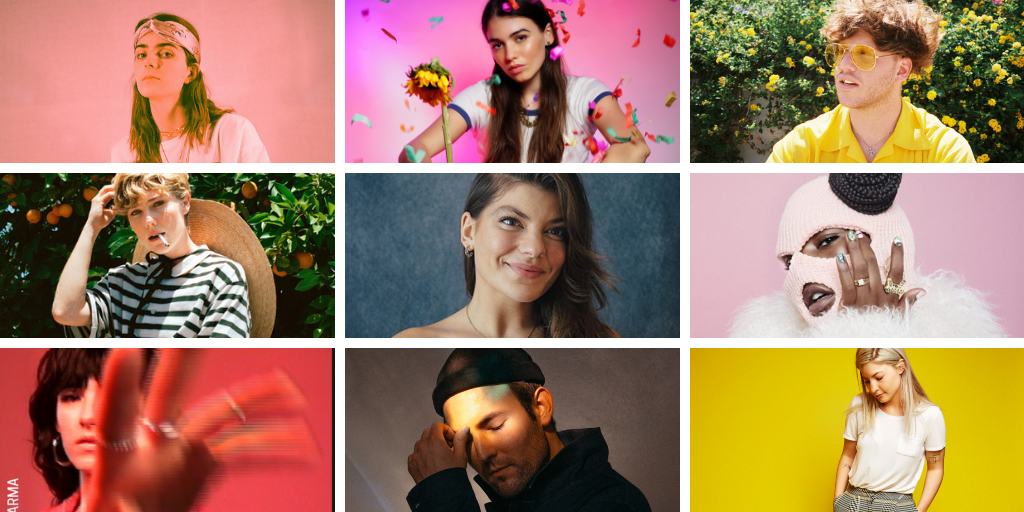 Donna’s voice is full of contradictions, the song that first had me hooked was “Jupiter” a spacey dream. At around 3:02 she sings “Baby, baby, baby” in the most delicate and heartbreaking whisper that I couldn’t stop thinking about it. After hearing “Keep Lying” I realized how she would turn that angelic whisper into a monstrous howl. Donna’s vocal agility and tenacity on stage make her unmissable, I will be seeing her as many times as possible during SXSW.

We first were introduced to Robinson with the haunting “Don’t Forget About Me” that song pulls at your emotions so hard that you doubt you would ever forget about her. Her newer songs “Karma” and “Nothing to Regret” quickly landed on every indie-pop playlist. They’re instantly catchy and capture that feeling of youth that Robinson embodies.

Dark pop is personified in bulow, she broke onto the scene with “Not a Love Song” but she’s not a one hit wonder. Her songs “Sad and Bored” and her latest “Sweet Little Lies” have a touch of danger with her candid lyrics. “Two Punks In Love” is a love song for the outsider.

I saw Chloe open for Sasha Sloan in Los Angeles and I’ve never seen someone so genuinely happy to be on stage performing such heartbreaking and vulnerable songs. She does it in a way where she’s kind of laughing at herself and her commentary on modern dating and expectations of women is spot-on.

Ella Vos’s dreamy songs are ethereal and all-encompassing, but her touching lyrics about love and loss and surviving cancer make her one of my favorites. She’s always genuine and her voice is soothing. She told us, “At the end of your suffering there is light, there is a new door, there is a gift - if you choose to see it. That’s what I’ve learned and I’d love to share that with others. A lot of my fans say that my music is “soothing” and I love that - and hope this brings more of that!”

FLAVIA rolled onto the pop scene with “Hateful” and “Don’t Wanna Be Here” and we were instantly hooked. Her songs are insanely catchy and she's a hustler through and through. Seriously, she's going to change pop music.

I’ve been dying to see Leikeli47 live and I missed her last year and I’m so mad at myself. Her songs “Wash&Set” and “Money” are so catchy there’s a reason you’ve heard her in a billion ads on TV. I don’t know what to expect from her live show but I’m dying to see her latest “Acrylic” performed.

Miya Folick’s album seems to go through so many different genres and she does them all so well. I saw her open for Pale Waves and we were all so shocked at how her voice changes during each song, one minute it’s a heartbreaking ballad and the next is a party. She clearly has so much fire inside of her and I’m dying to see her live again.

When I first heard “home” I couldn’t stop listening to it, the song has this riving chorus that I knew would be an instant classic. Years later, and the song still is the bookend to morgxn’s dynamic and emotional set. No one feels like morgxn does, his “me without you”  a heartbreaking ballad that shows off his ethereal voice and “xx” was stuck in my head for months. We definitely never miss him at sx.

Minke’s angelic vocals and all-too-relatable writing make her a cant-miss for me. She first caught my attention with “25” a song she says is about  “Longing for something more than that, whatever that is. Something real in a seemingly disposable world. Questioning if that’s still possible. Questioning if it’s got the better of you too.” She just dropped her album “The Tearoom” and it’s filled with gems.

Yoshi Flower has the most unique chill vibe but with his own electronic and hip hop flair. His cool demeanor and catchy lyrics are what makes him truly unique. He once told Billboard, "I don't see why I can’t be equal parts Zen and ratchet. Basically my constant thought is, like, being enlightened, but also being fucking iced out in diamonds."

Your Smith is the cool girl we want to be, her “Bad Habit” EP is effortless but vulnerable. Originally Caroline Smith, but her alter-ego “Your Smith” is her stage persona with “less fucks to give” as she puts it. She told us, “I want people to have fun, to let loose, while also creating a safe space for people to fully feel any emotion they might need to feel. There will definitely be some dancing, some jokes, and just a little bit of us getting in or emotions.”

Taylor Janzen’s mellow and heartbreaking songs are exactly what your sad girl self needs during SXSW this year. She never shies away from addressing emotionally charged topics in her music.

She told us, “In just her first two singles, Janzen has already shown that she does not shy away from addressing emotionally charged topics in her music, “I write songs for myself, but I also recognize that sometimes I am able to articulate things that others can’t. And I remember when I couldn’t, and how difficult that was for me, and how certain songs and certain artists helped me learn how to do that. So that’s why I put music out. Because if someone else has all these feelings and they don’t know what to do with them then if I can help them articulate them then that’s good and that’s kind of what I am trying to do.”

She Shreds - Wednesday at Cheer Ups

Haus of Venus - Sunday and Friday at Dozen Street

Y’all I live for SXSW, but it isn’t for the weakhearted. You don’t get any sleep, your schedule is planned down to each minute, and you have all these spreadsheets. It’s so daunting as a first comer. I recommend having backups for every show/party and having a couple of venues and showcases where you know the shows will be good. RSVP for everything have a gameplan.

At LEAST three battery packs. Guys I’m on my phone nonstop. I have at least three fully charged battery packs on me at all times. I charge everything the night before. Elderberry pills so I don't get sick. Zipfizz so I have energy and I'm never hungover. Throat Coat tea, I lose my voice so fast. Shoes you can walk for days in. Protein bars, see next paragraph.

I’m not made of money people, while I snag any free snack swag I can get, I keep protein bars on hand for when I’m hungry because after walking all day at the $2.13 plus tips I make as a music journalist I can’t really afford to eat well. I register for any party with free food and drinks and I’m all about the day parties during SX and having that When What Where spreadsheet where I can find free bevs.  Make sure to RSVP to anything with free drinks and food.

Just let SX take you where it wants you to go and relax a little. You'll see what you need to see. Try to be social and meet new people. It sucksss but just try.