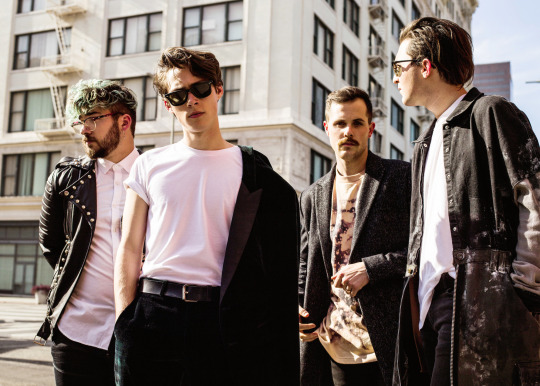 Weathers has been blowing up lately, their songs are fresh and modern and their live show is insane. We caught up with Cameron Boyer to chat about their meteoric rise and what they want to bring to their fans.

Let's start with how you all met

Cameron: Well, I met Brennen, our bass player, via Facebook. I put out a Facebook audition thing because I didn't know anyone who was a bass player and he showed up and that was that. I met Cameron Olsen, the guitar player at a Battle of the Bands. We were in different bands and we thought he was really good. And so we asked him if he wanted to play with us for a while and that was that. And then I met Cole because our dads actually played in a band together a little bit after high school and when I was looking for a drummer my dad was like, "Oh, my friend's son is a drummer." That sort of thing. So yeah.

What kind of makes Weathers stand-out to you? I mean, what's the unique thing that you bring to the table?

Cameron: Well, I think that we're a band that's trying to be very different from other bands sonically and artistically. And we don't want to kind of fall into the same cliches that most rock bands would fall into. And I think we walk a line in between kind of edgy but also kind of clean. If that makes sense. We want our music to kind of reflect who we are as people and just let the music kind of talk instead of us. If that makes sense.

How do you kind of prep for a tour? And what can the fans kind of expect?

Cameron: Well, they can definitely expect a very fun high energy show where they can dance around but also feel very emotional and have a real experience. We want people to come out to a show and we don't want them to think of it like, "We're watching a rock and roll show." Because I wouldn't say we're a rock and roll band. We want them to see the whole picture. We want them to see the whole show as an experience and not necessarily just as music or the visuals by itself, if that makes sense. I mean, when people see us live, you're seeing the whole package. And we want to make sure that the whole package is coming across. We don't want it to be just about the music if that makes sense. Because I think that Weathers is bigger than just the music and it's a lot bigger than ourselves as well.

And what's kind of the biggest challenge you faced in the music industry?

Cameron: I would say the biggest challenge is… I guess people seeing the vision and where the band is going has been the biggest issue, just because I think we are very different as a band. I mean, you might listen to music and think we're one way or you might hear us in an interview and think we're another way, but then when you come to a show, you kind of see it all form together. Or if you watch in one of our music videos, you'll see it kind of all-- kind of the whole picture if that makes sense.

Yeah. And I feel like there's not a lot of band bands anymore. Do you know what I mean? The radio, it's all pop music.

Cameron: I think that there's that and to take it even further, I mean, I think that a lot of people are like, "Oh, man. There are no more bands anymore." That sort of thing. And they want to see a return of the bands. I think Weathers is not that if that makes sense. I think that we don't want to be a retread. I mean, of course, we have influences and stuff like that from the bands that we've grown up listening to and whatever. But I mean, we don't want to be that band that reminds people of their youth. We want to be the band for our youth. We feel like music's kind of lost its way a little bit, that it's like people want to hear stuff from their youth, but no one's actually looking to the future, instead, they're looking to the past for nostalgia and I don't think that's how music progresses forward. We want to be true to ourselves and true to our influences, but we also want to move forward and move the needle and kind of wake people up a little bit. And I think that's a huge part of what we're all about.

I hate when people say like, "Oh, there's no good music now. Modern music is bad." That's such a horrible way of thinking. It's like you're not trying hard enough to find stuff.

Cameron: I think what they really mean is there's no music that they like anymore because they're stuck in an older time. I think that there's a lot of kids and people in the new generation that would totally disagree with that. I think there's lots of really good music that's going right under the radar and it's not being given a chance because I think that a lot of people that are running the industry are not in touch with things that are moving forward like with the new people that want something new.

And what would be the best piece of advice for a band that's just getting started?

Cameron: I would say be very open to change and be very open to constructive criticism. And you definitely got to have thick skin and you got to know that you're definitely going to fail before you succeed for sure and think that you got to do all those things without changing who you are. Do you know what I mean? You've got to realize that you as a person can progress and change, but you can't do something that you don't believe in. If that makes sense.