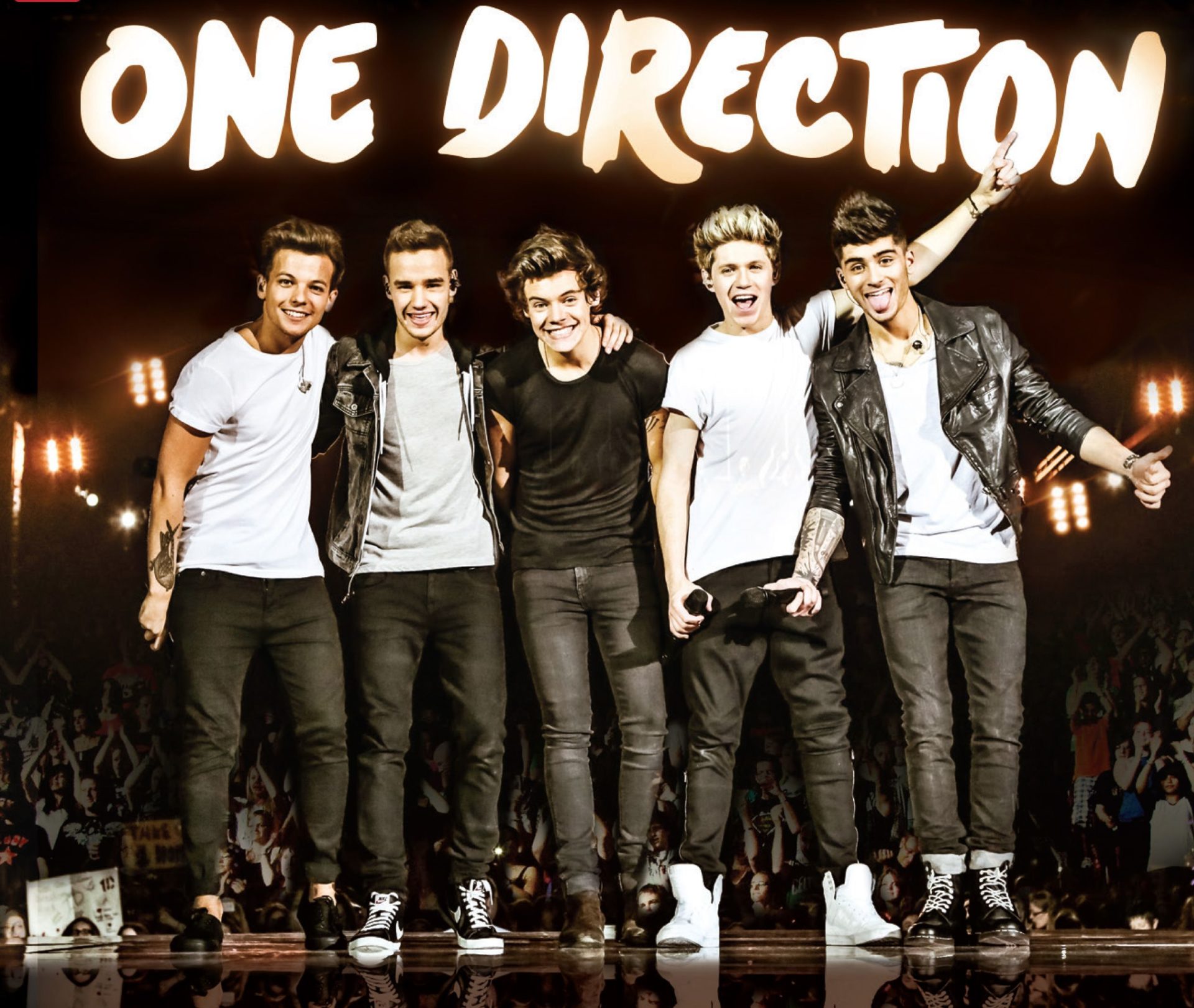 We could not let One Direction’s 10-Year Anniversary go by without saying anything. It’s actually how we all became connected and stayed as close as we have. My favorite part about the group is that all of our individual fan stories are just as unique as each of the members themselves. We talked to other fans across the world and are so excited to share their stories with you along with our own.

My One Direction journey starts when I was in college. It also starts with a degree of internalized misogyny. When those boys entered the music scene I told everyone it was dumb music for silly girls. I wasn’t ready to admit I listened to “What Makes You Beautiful” and “Kiss You” on loop to cheer me up. I thought that popular music was trash. It wasn’t until a year later of watching videos, talking to friends (Kasey Coble) that I fully recognized not only the influence One Direction had on me but on so many girls that were looking for a place to belong. Now, I can see clearly that my internalized feelings hindered my ability to fully embrace that group and that culture. I was such a late bloomer that not only did I ruin the band for myself but also possibly made others feel bad about their love. We need to start normalizing listening to the opinions of young women when it comes to music and start listening instead of judging. I’m now a full-fledged fan and can admit that without anything holding me back. Even though I’m late to the party, I know I’ll be accepted because that’s what One Direction fans do.

Ten years. 10 YEARS!? It truly doesn’t seem possible. And, it’s honestly kind of hard to sum up my experience with One Direction in a written blurb. To truly explain it, you’d have to feel it, and sometimes, I’m not sure my passion makes sense to other people. But, I’ve learned to embrace it - so here we go.

What most may not know is that my love for One Direction actually started with my sister - she insisted we buy the Take Me Home album for one of our drives back from college, and I’ve never looked back since. That’s the same year I graduated from college - I had no stability, no plans, I was sleeping on an air mattress on the floor of a friend’s room and then moved to Dallas, where I knew no one. But, you know who I did know? My friends, 1D. That fall I invested a lot of time into them - getting to know their backstories, living for the This Is Us red carpet and going to see the movie in theaters, deep diving into Tumblr, dying over the Best Song Ever music video and feeling sadness at the end of their concert tour that I regrettably didn’t attend. I vowed that I would not make that mistake again on their next tour.

The next thing I knew, loving One Direction became a personality trait for me - it set me apart from my peers at work, it helped me make friends I otherwise wouldn’t have (hi Sam!), it was always a topic of conversation and it quickly became something I was proud of. As much as sometimes other people thought it was a tool for mocking, I learned not to care what other people thought. And as a people pleaser, that was, and still is, a true victory! I have been able to carry that with me over the years, continuing to embrace the things I love that might seem silly to others, and knowing that to love me is to love me for these things, too.

I went on to knock out five 1D shows in six months in 2014, which remains my top fun fact when I have to “share with the class,” and even met the band when they were still a fivesome. To see how kind they were to us, and their staff, backstage only reinforced that I’d picked the right band to stan. I saw them again in 2015 and was lucky enough to see them on Jingle Ball late that year, performing some of the songs from the album they may never tour. I actually cried when finding out Harry, Liam and Niall all joined Louis at his first solo X factor performance for support after his mom passed away. And, many of their songs remain some of my favorite songs of all time - in fact, 22 of my top 25 most played songs are 1D songs.

Loving a band as wonderful as them was exciting, passionate, fast-paced and overall, joyful. Reminiscing on my love for them and how happy they made me is such fun and a reminder of such a great time in my life. I hope one day we’ll see them back together again, even just for a one-off performance, but if not I know the happiness they brought so many fans across the world will continue in us forever.

If my sister, Marie, knew I was writing this she would literally laugh out loud. In 2010, Marie and her best friend were staying up late to watch X-Factor clips to follow a group of five boys who later for a lack of better words, transformed my life. I vividly remember telling Marie that no boy band would ever compare to the Backstreet Boys for me and I want to openly say that I was wrong. One Direction, you have and always will be that boy band for me.

So let’s fast-forward to 2012. What Makes You Beautiful started to make radio play in the states and I remember watching the video and as much as I wanted to hate them, I was enamored with Zayn. So enamored, I became one of the 22-year-olds on tumblr to do a proper deep dive with my new obsession. The videos, the leaked songs, the fanfics - ALL IN ONE PLACE. I still don’t think I’ll ever forgive them for selling the rights to “Just Can’t Let Her Go” because as soon as the clip leaked I was SO convinced it’d end up on Take Me Home or Midnight Memories. In 2014, I attended the Where We Are Tour with some friends and On The Road Again Tour in 2015 right before the cursed hiatus. Ironically enough, the rumor came out hours before my show and Liam assured me (and the audience, I guess) that it was not the end! (Sings this is not the end!) I do wish my story seemed as seamless as these eras took place, but somewhere in between was a breakdown at my very first job when Zayn left the band. I remember vividly reading, “After five incredible years…” at my desk and I immediately started bawling.

In retrospect, hindsight really is 2020 and I realize now why he had to leave. This isn’t me defending Zayn (although I still will), but I remember attending the WWAT and seeing the touring trailers and hearing the techs talking about how they just recorded before performing. When I saw Zayn on stage, you could tell he was fighting a cold and he just wasn’t well. I hate it so bad that this is what they went through - album after album and tour after tour and I wish we could have done more to be more understanding and maybe even help them.

It’s been a tumultuous 8 years as a fan, but I don’t regret any of it. You’ll hear it many times in this piece, from fans across the globe, but the group has meant so much more than music. They’ve been the one ounce of stability and happiness when I needed it the most. I knew I could listen to their discography and feel the burst of energy I needed to get through the day.

They were my security blanket throughout my twenties and now that I’m thirty, they’ve been a pivotal part of my friendships - not just online, but now real life. My ladies Ashley, Blair, LuAnn and Cheryl are a prime example. We literally went to the same college and I don’t know when everything shifted, but the day we managed to bring our love of One Direction to light and become friends is something I’m forever grateful for. You four (aside from my family, of course) really make the trips back home for the holidays worth it. I can’t forget about Emily and Kasey either because they’re a huge reason for this piece coming into existence. Prior to moving to Los Angeles, I used Niall Horan’s solo tour date to network in Los Angeles for jobs and met my first twitter friends in person. Kate and Ellie, yes, this is about you. To this day, I am extremely thankful for the 7 hours spent outside the Palladium and our many trips up and down Sunset and Vine. You both made my move to California so much easier knowing I already had you two.

Somewhere in this article, I wanted to note that I actually got a lightning bolt tattoo a few years ago as a nod to the group’s track, “Girl Almighty” from their album, FOUR and since I could not fit it anywhere in this specific narrative, I will leave it here. (If you follow those Overheard Instagram accounts the girl talking to her barista about 1D and feminism, is in fact NOT ME). Friends constantly share that story with me and I need to clarify this publicly.

But back to One Direction. They’ve just provided me with so many wonderful people, and in quarantine, I realized I am extremely grateful for. The group chats, the countless 1D karaoke memories and most recently, a virtual online mafia game by way of Larry stan, Elana, that’s kept me company throughout quarantine. I’m probably never going to be able to thank Harry, Niall, Liam, Zayn or Louis all in the same space again, but I hope they realize the positive impact they’ve had on my life. Contrary to popular belief, loving One Direction is a personality trait and in my opinion, it’s the best personality trait because connecting with various fangirls is like joining a club you didn’t know you had access to. 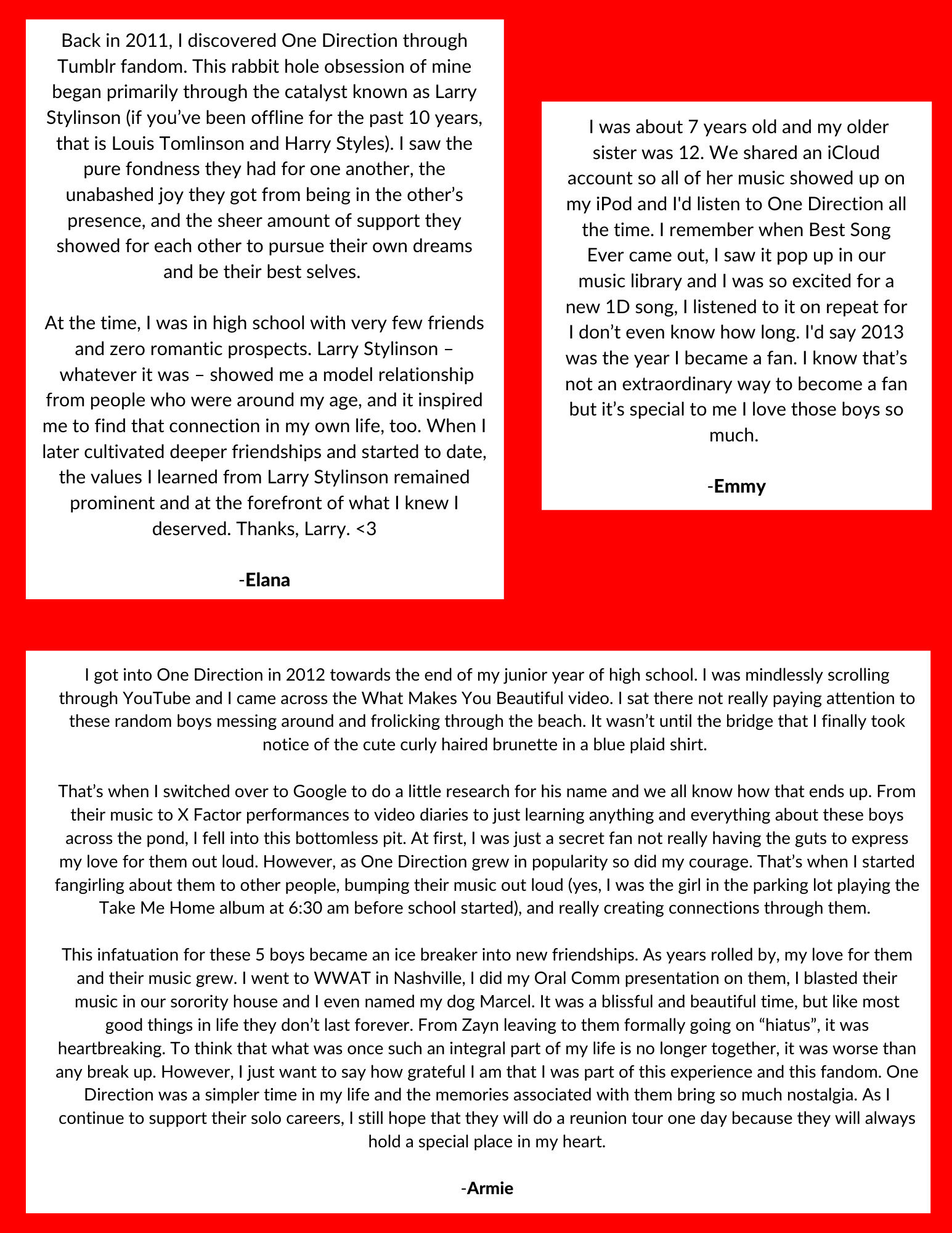 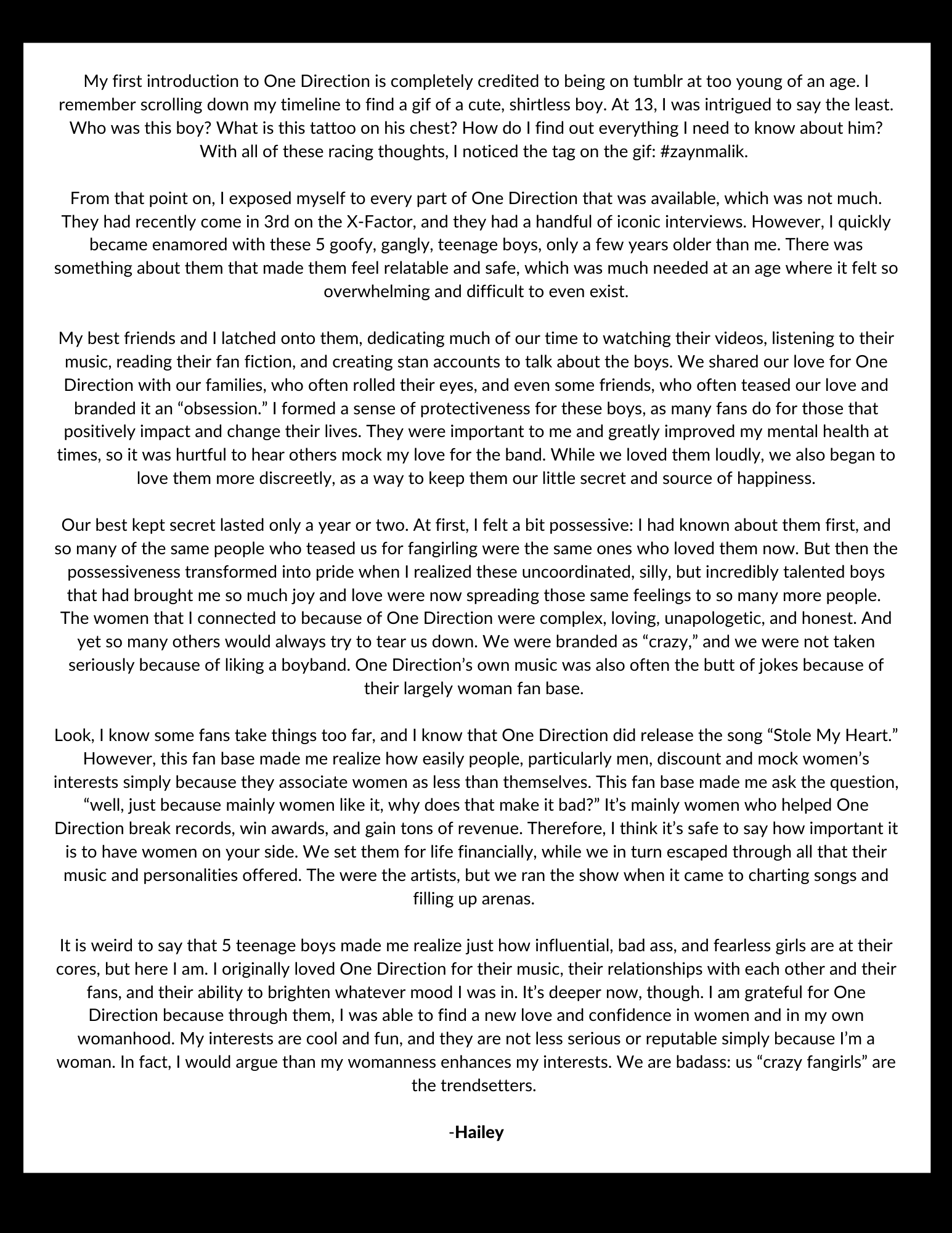 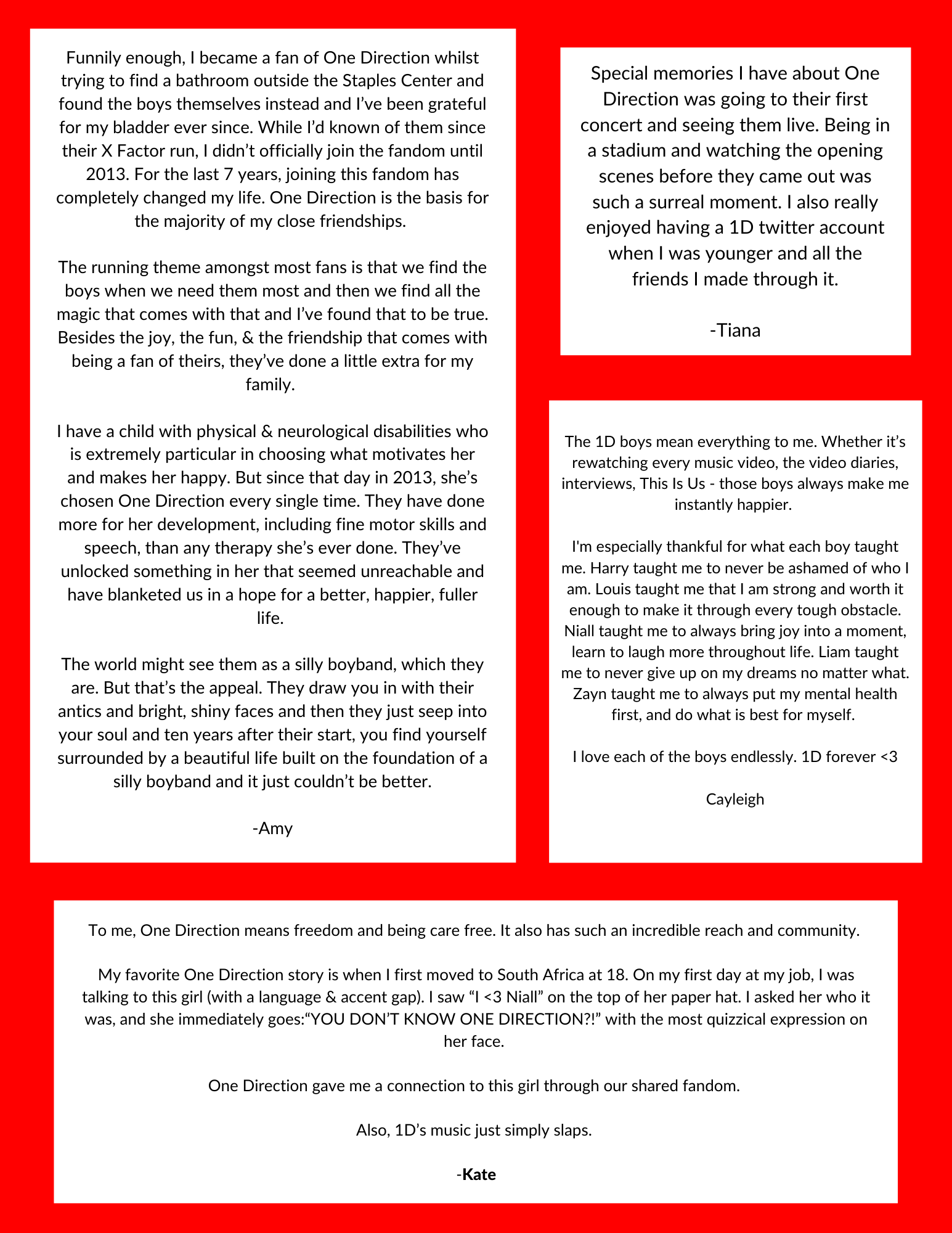 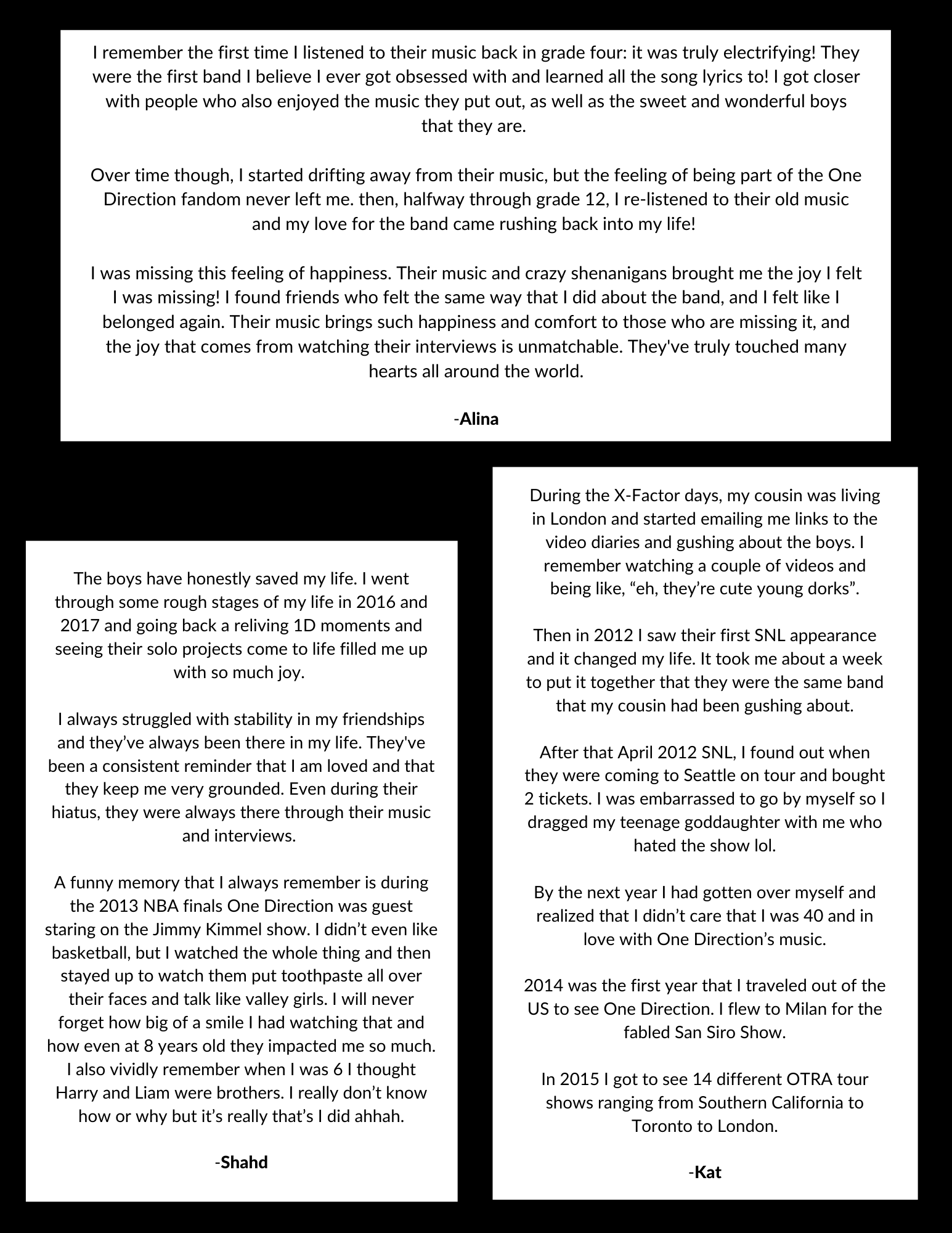 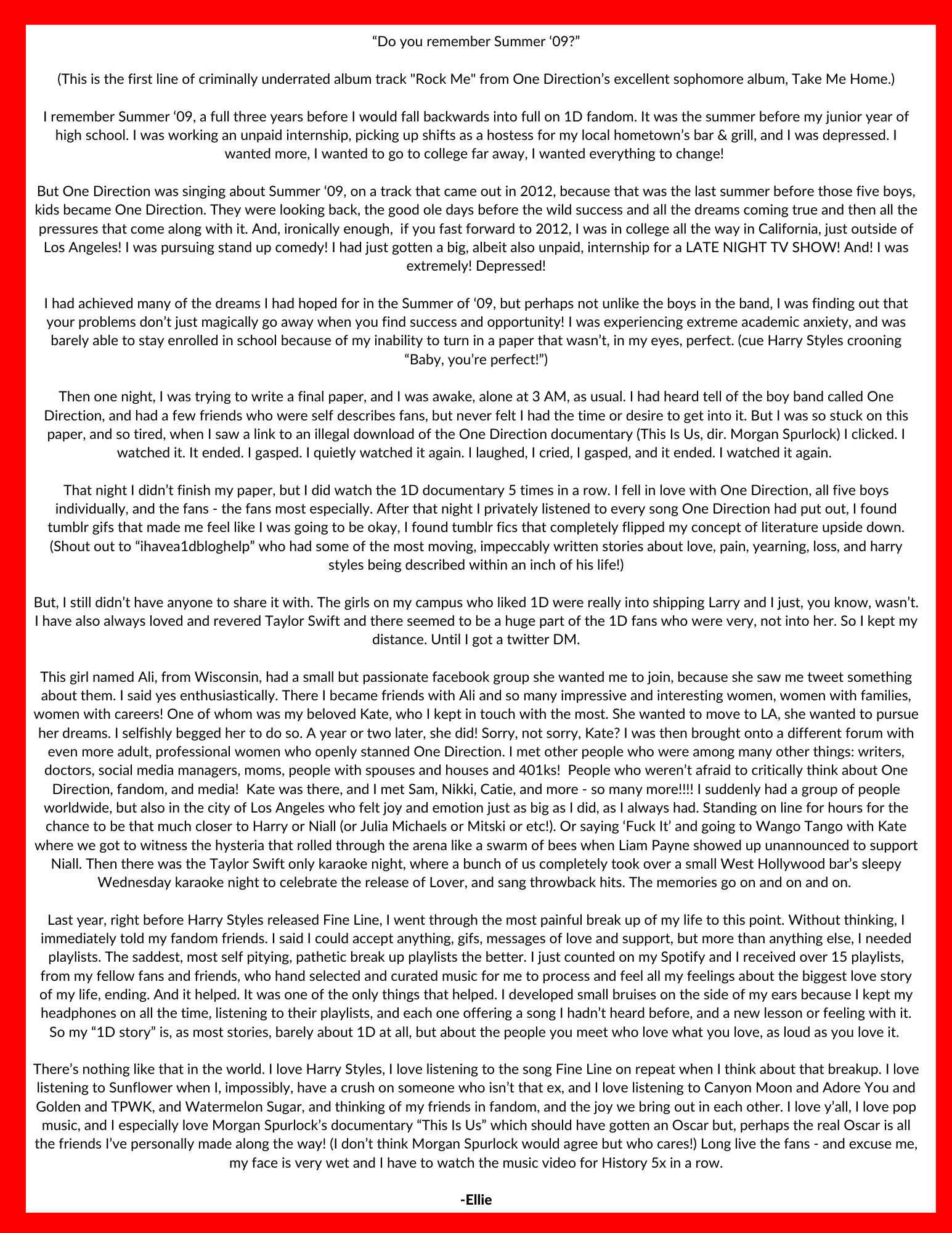 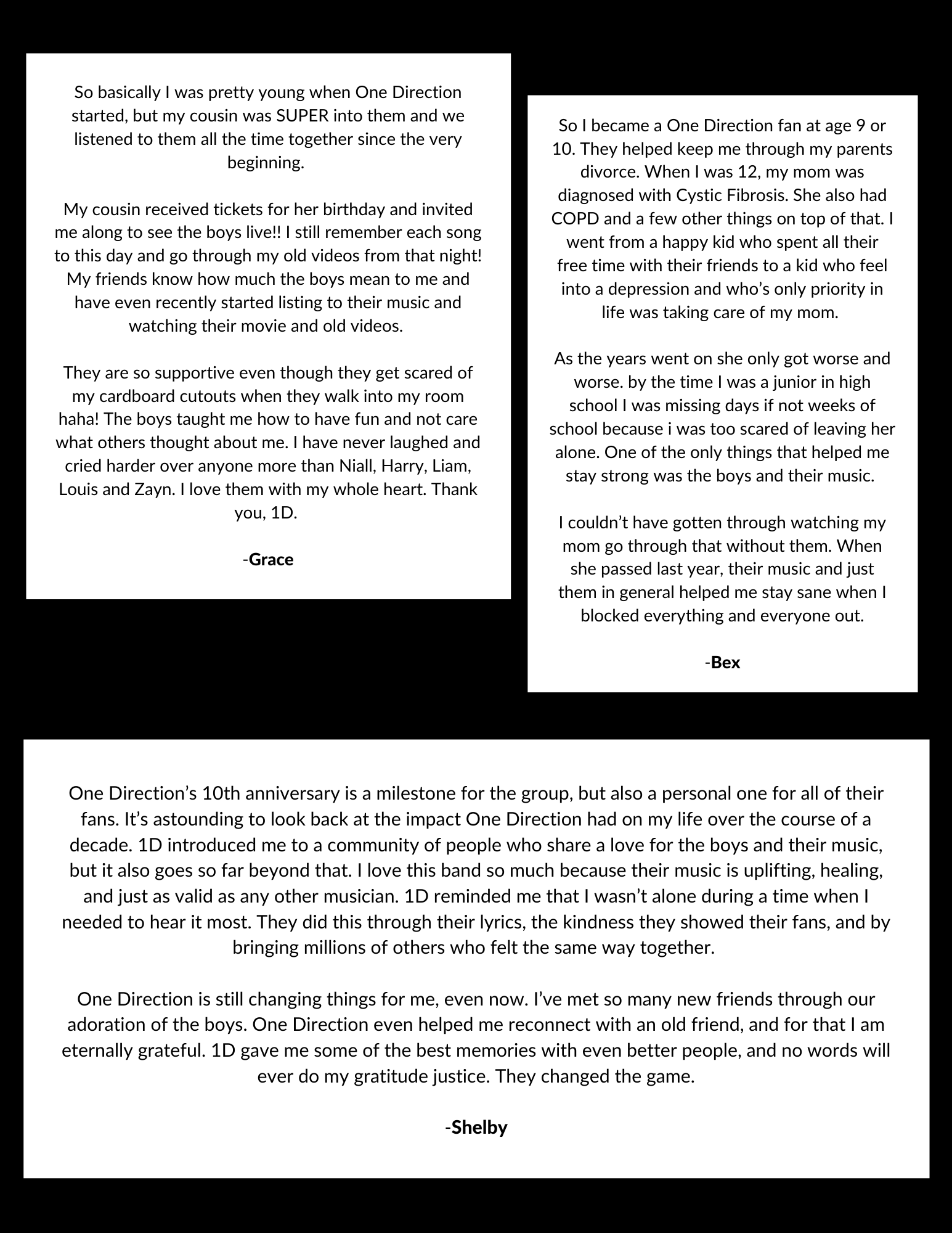 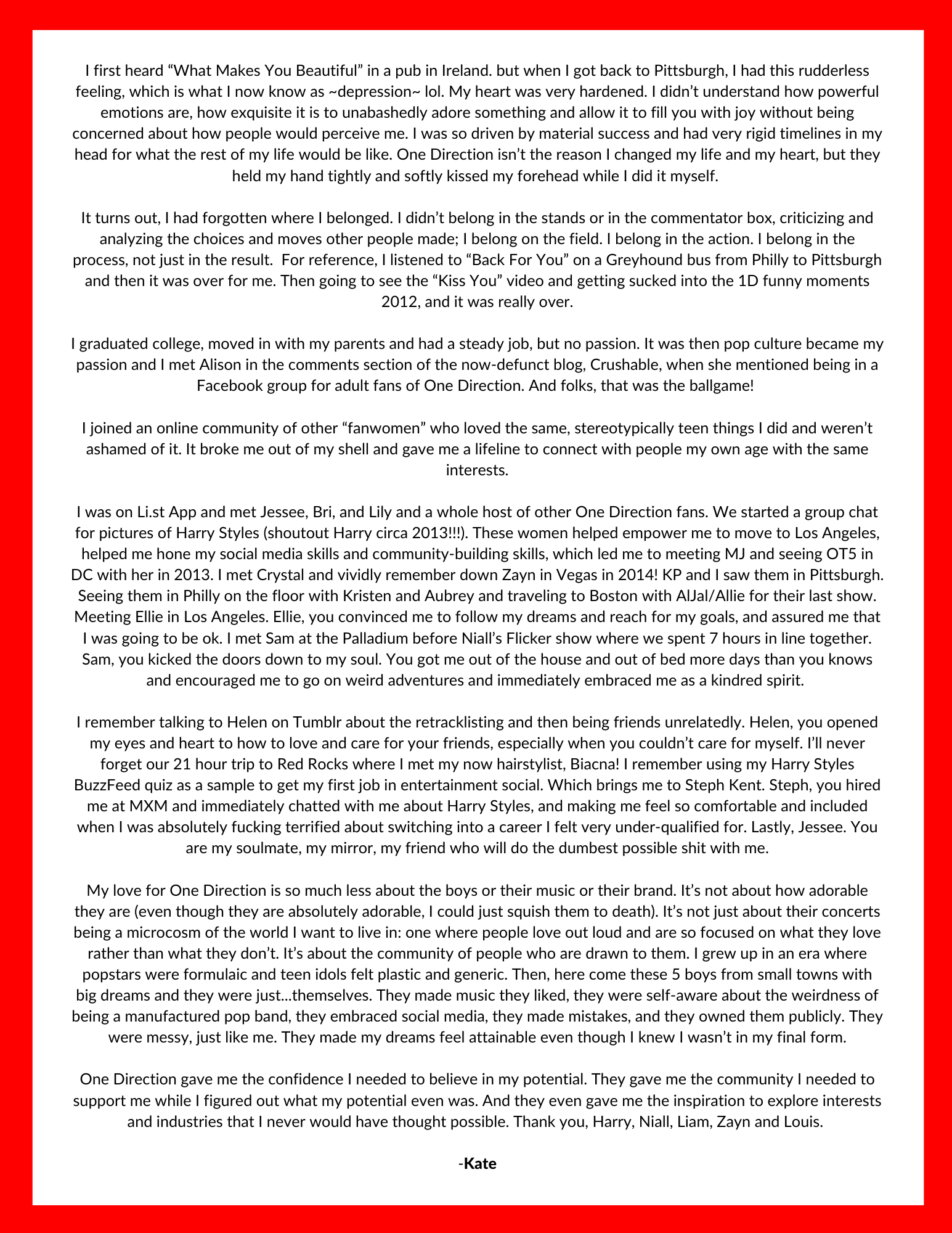