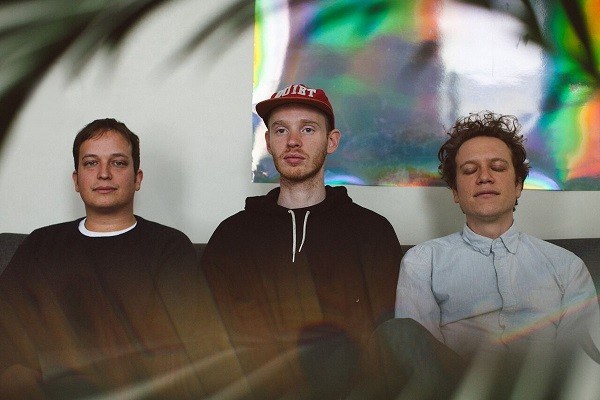 “Three psychos that came to be through fate by way of necessity.” That’s how B Boys describe themselves on Facebook. They’re absolutely dynamic on stage. I saw them at Sidewinder on a hot night in Austin and they were absolutely captivating. We talked about long drives, Denton, TX, and the inspiration behind their new album Dada.

“We thought Brendan, our bass player, was going to die. For some stupid reason, he was wearing a long-sleeve shirt.” Britton says, “We were a little delirious but we had a good time.”

They did seem like they were having a good time and the audience did too. Britton and Brendan met each other in Denton, the lesser-known music city of Texas with a booming indie scene and house shows for days. They went to school at Univeristy of North Texas and ran a couple of DIY spaces. They each had a bunch of different bands before finally clicking with each other.

When they moved to Brooklyn, that’s when it started getting serious for them. Even though it can seem like the music market there is oversaturated with musicians dreaming of their breakthrough.

The way they found their signature sound was through the music that inspired them. Britton says, “A lot of it’s probably just from the music that we’ve listened to in our lives. We all have similar drifts, but we do just like sound in general, so I mean all sorts of music inspire us. Back in the day, me and Brendan tried a band that was like late 80’s. That still influences at least the way I play guitar.”

The thing that makes the B Boys so dynamic is their chemistry, you can sense it on stage and even when they’re all on the phone with me bantering back and forth.
Andrew explains, “We all take our music background, and hopefully it works out. So we can all agree pretty easily on what we all like. We all know what we like, and the chemistry was just there from the beginning. It wasn’t a struggle to write, or there’s no great ambition or idea of what the band…It just comes really easily and naturally, and I think that’s one of the biggest assets that we boys have, is that how fast and natural.”

Their latest release, Dada, named after the art movement is spunky and interesting. They describe it as, “Language, self-awareness, introspection, a fresh pair of chinos. It’s all connected; not everything has to make sense.”

Britton adds, “It’s a record, so anytime you make a record you hopefully are happy with it, you’re happy that you made something, it’s a lot of work. And then that it gets put into something that can hopefully last for a while, something that you can remember for the rest of your life.”

For a band that started out of a small music city then moved on to a large music base like Brooklyn they have a lot of wisdom for bands that are still trying to make an imprint.

Brendan says, “We meet other bands who are like, ‘Oh, what’s it like being on a record label.’ Something like that is a blessing, and it’s really great. But at the same time, you don’t need anyone else to do … Make music, or put it out. With internet, your phone … You don’t even have to have expensive gear. That stuff doesn’t even matter. You could bang on some pots, and hum a song or something, and that’ll be better than a lot of music other people do.”

Britton adds, “If you have any desire to make music, listen to that desire, and make music as much as possible, because it’s easy.”