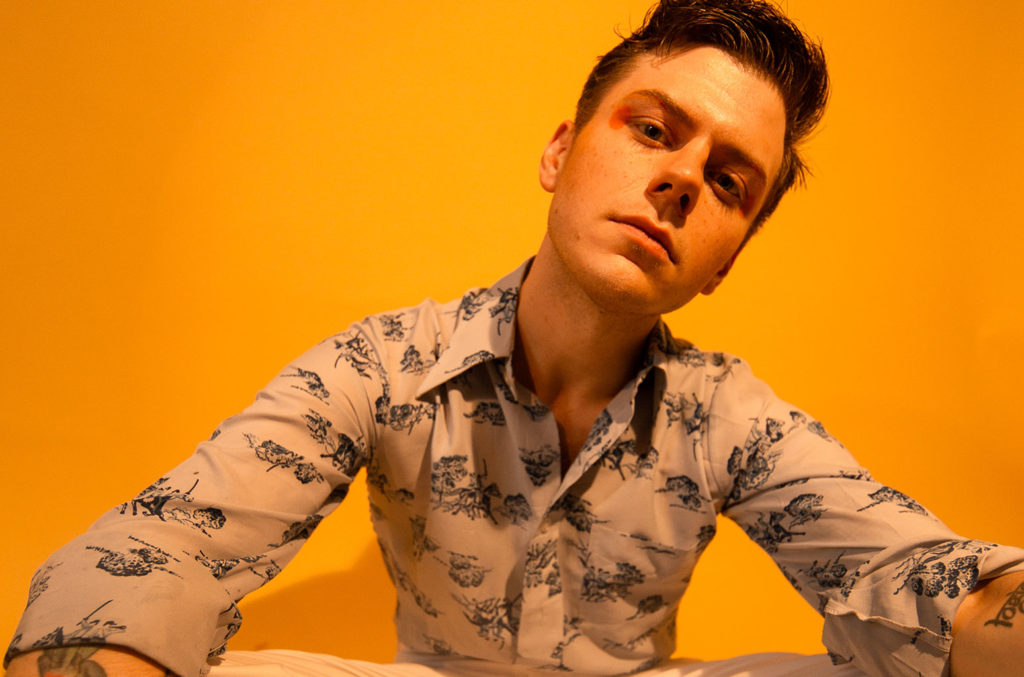 Chaz Cardigan has been absolutely one of my favorite interviews of all time. I don’t even want to or have to go into such a long detailed description of what he is as a person and artist. His EP Holograma is out now and we discussed his inspiration, favorite tracks, and the topic weighing on everyone’s minds, the election.

Chaz: I approached this record a bit differently than my last two projects. On I and Vulnerabilia, I wrote and wrote and wrote and collected songs over, and then I tinkered until they were finished.  Holograma was a lot more spontaneous. I’d write, and then the songs didn’t change after the fact.  I tried to not let myself get bogged down in revisions this time around and just trust my gut.  There was a little bit of fine-tuning towards the end of the process once I locked in the tracklist, but each song is pretty close to its original demo form.

Can you tell me the song you’re most proud of on the EP?

Chaz: “Jesus Christ I’m Lonely” is the most personal song I’ve ever written.  I produced that song in particular and played all the instruments, so it feels like home base.  I produced and played everything on my last two bodies of work, but I let some friends steer the ship this time around to get new perspectives.

Which song are you most excited for the fans to hear?

I think “Change Your Mind” and “Losing Touch” are absolute bangers.

Did anything in quarantine influence the way this project came about or the song selection?

Chaz: The record was being mixed before the lockdowns started, but I do think that being stuck at home and feeling so distant from everybody gives each song a new subtext, and it definitely influenced what order I released the songs in.  “Everything‘s Wrong” specifically was such a perfect song to start the album cycle with during a pandemic.

The real influence that quarantine had on the project was the challenge it presented in making videos.  I had a swarm of visual ideas for these songs and I tried to find ways to execute them very early on in quarantine, but there are so many layers of liability red tape to work around right now.  I was really lucky to meet Haoyan of America and Alex Futtersak, who created all of the animated videos for the project.  I think we really made the best of a dead man’s hand and created a very specific visual world for Holograma.

Aside from the EP, have there been any highlights in quarantine? New hobby or favorite show binged?

Chaz: Counterintuitively, I’ve done a bit of traveling.  I’m kind of a germaphobe on planes anyway, and I’ve gotten in a routine of getting tested a lot.  I’ve been really interested in exploring the country a bit and finding where I’m supposed to go after seven years in Nashville.  Back at home I’ve become a bit of a plant dad, I’ve been reading more this year, and I finally got around to bingeing Black Mirror and Fleabag.

You’ve been pretty vocal about voting to your fans and I love that. In leveraging your status, why do you feel that it’s important and what do you want fans to understand that they may not?

Chaz: As it stands right now, I can’t see a reality where Donald Trump leaves office.  He’s been soft-balling this idea for years of staying in office even if he loses an election, and in the past few months he’s said outright that he won’t leave.  He’s been publicly undermining the legitimacy of the election results, saying that it’s rigged unless he wins, and that’s historically really scary and dangerous.  If he’s able to speed the approval of Amy Coney Barrett to the Supreme Court, he’s got no reason to transition power.  Regardless of the margin he loses by, I think that the military, the police, the Supreme Court, and his cult of personality will keep him installed in office for as long as he wants.  I’d love to be wrong, but nothing in his rhetoric or history exactly says “gracious loser” to me, and he’s committed enough constitutional offenses that he’d likely be federally prosecuted by any successor, so we are staring down the barrel of outright fascism.  That sounds like an argument against voting, but I’d argue that it makes voting imperative so that history records the real will of the public.  It’s easy to kind of laugh this off and say “well if this were real fascism there wouldn’t be an election at all!”, but there are still elections and parliament in Russia and China.  The institutions will keep existing, they just won’t do anything other than prop up the figurehead.  Voting matters specifically in this election because it may be the last time the American public gets to express dissent.  I don’t trust polls that say Biden’s got this in the bag, and I don’t necessarily trust polls (even on Fox News) that paint Trump as the most unpopular president we’ve had — but if he really is, and people are really genuinely concerned and tired of the constant chest-puffing, this has got to be a landslide election.  We’ve got to do better than 50% of eligible voters showing up.