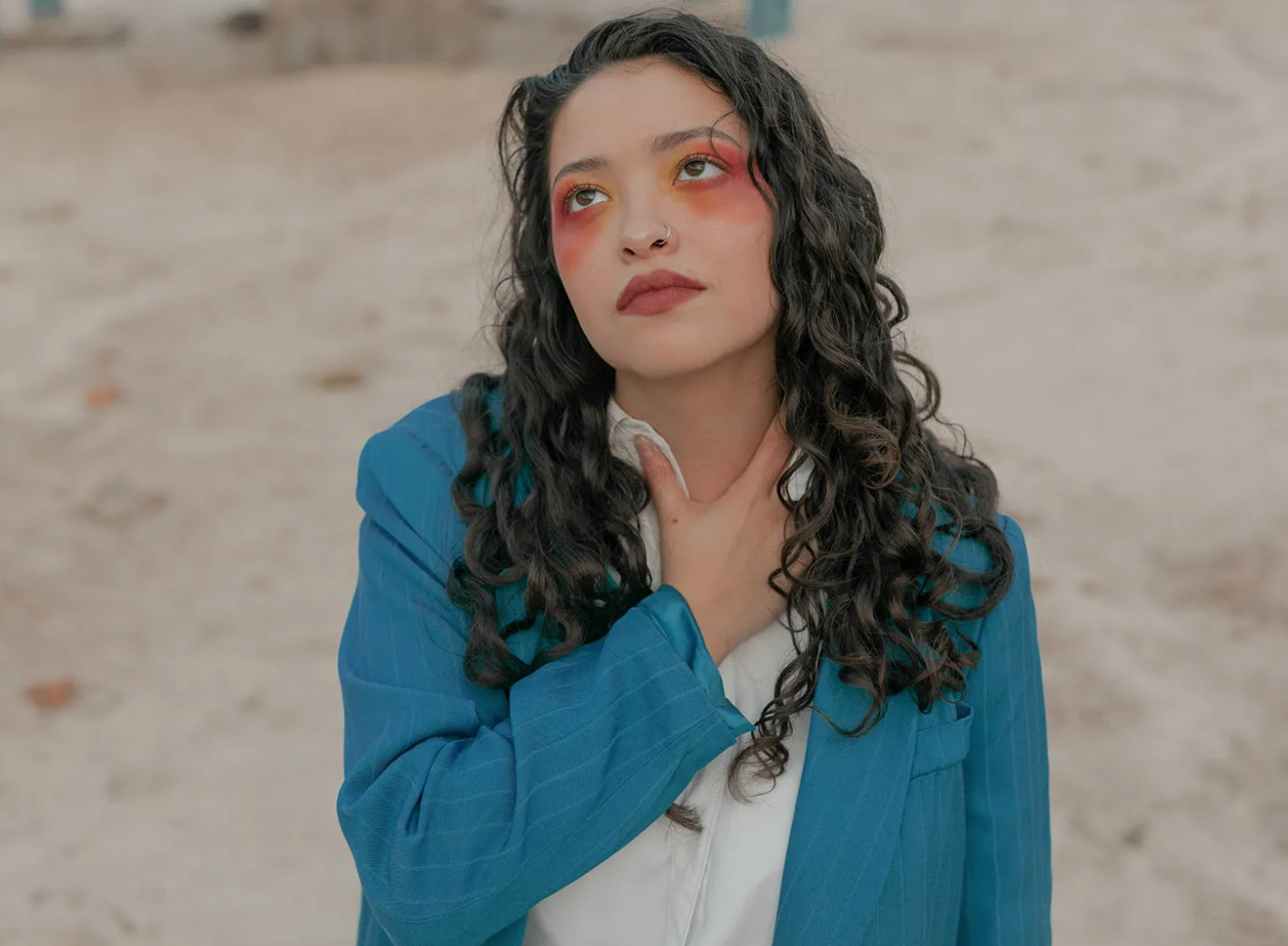 Eraste's unique voice immediately hooked me. It's so vulnerable; you can just feel it in her music. She's a Gemini sun and a 7 Enneagram, but she keeps herself grounded by surrounding herself with reliable Virgos. Her latest EP, "crashing every party" is filled with those angsty feelings of early adulthood. The struggle to find your place, your parents who don't understand you, and fully discovering who you are as a person.

The only Geminis that are bad are Gemini males. I promise you.

Eraste: My point, exactly. We are out here. But my Gemini Sun, Scorpio Moon, Scorpio rising. and when I told my therapist that, she was literally like, "That's a lot of intensity, please, give me a break."

Let's start with how you got started in music, how did that journey happen?

Eraste: I'm from the smallest town ever. There were less than 3,000 people. My parents never really encouraged music because they didn't understand it. I did piano lessons for a couple of years, and I absolutely hated going. I hated being there. I hated reading music. I was just like, "I'm going to learn the basics of it and get out." I was consumed with popular culture and a bunch of the music that was going on in the early 2010s. I taught myself instruments, and I would just mainly do worship music, and so that's when I fell in love with playing music. I feel like it was a different aspect of my personality because it was such a spiritual thing. After outgrowing that-- not outgrowing the spirituality but being like, this is what I want to do. What do I want to say when I'm not singing hymns or something else? And so, that's kind of how I got started in it and, of course, Taylor Swift.

Besides Taylor Swift, do you have a 2010s musician that meant a lot to you especially growing up?

Eraste: When I got to my formidable years, my adolescence, I was obsessed with Halsey, well, first of all, being like a tumbler girl and all that.

Yes, that was such a good time in general.

Eraste: Honestly, the air was different. And then my main influence that I love, more than anyone else, is Lorde. And her Melodrama album is it for me. And, of course, Katy Perry's Teenage Dream. And Kesha and all of that, I just remember. Whenever I listened to music-- besides worship music because I was just so into worship music, but that's what it was. I was singing songs with my sisters or with my friends on a backroad. And that's so cringe-y. But that's what I experienced.

So let's talk about your EP how did this kind of come together at first?

Eraste: Well, I dropped out of college. I was just kind of hating it, which I gave it a chance. I was like, "I wanted to be making music. And that's always what I wanted to do." So I was actually going through a lot of mental health things at the time. I was just trying to get my bearings in that before I really had any ability to do music. Then I was coincidentally working at this coffee shop in uptown, and one of my friends, who I co-wrote with, was my barista lead. And we just bonded over music, and so it just all came together so fast. Then I got in touch with the producers that produced his first EP. And that's when the whole world shut down. It was kind of like a whirlwind of things happening at the right time.

Eraste: I actually wasn't going to put this one on the EP at all. I had another song called "I Don't Know Me," which is kind of similar, which I want to release in the future. But basically, I wrote this by myself in my car with a little toy piano that I ordered off of Amazon because my apartment walls are so thin. And so I was like, "I'm going to go sit in my car so that I don't bother anybody." I just kind of put it on the back burner because I wanted to write new songs. It's definitely the most revealing song on the EP, and it's the only one that I really talk about myself. But ultimately, I ended up going with it. I think in finding myself and my sound, it also came along with finding the things that I've done to other people and being able to own up to it, even though I'm not going to apologize for it or change. I feel like all I ever do is crash people's parties. And it sucks, and I hate it, but at least I can acknowledge it. And that's the first step into like, "What are my behaviors and how can I stop hurting other people?"

I really liked "jealous," and I liked "right back where you want me" as well.

My favorite song was "right back where you want me." And I actually wrote that about a relationship that I was having with my parents at the time. I didn't speak to my family for two years. I went to college, and they cut me off because I was gay, and it was a whole thing and small-town drama. I'm so fiercely independent and stubborn. I was like, "You know what, I'm just going to muscle through it, and I don't need you." And it was awful; I am prone to toxic relationships. That's just how it is. But with my family, I feel like I would sacrifice what I wanted and who I was, like my sexuality, for the sake of being where they wanted me to be and being who they wanted me to be. And it would feel so great to be accepted and belong, but I would have to pretend to be somebody else. and then ultimately, I would be like, "No, I don't want to do that." I was going between my love for my girlfriend and my feelings for her and my sexuality and then my family. I just decided to do what I wanted to do, and that's just kind of like, hope that someday it would be easier. Even now, I feel like I can't breathe when I go home. And it's going to take a lot of time to feel that, but I think I'm accepting myself.

But it's still hard.

Eraste: It was pretty awful. I mean, whenever you move out of a small town and you move to the metroplex and it's like you have all this freedom and you have all of these-- I don't know. I was born for the city, and I was born for the movement and chaos. I just kind of played into that a little too much, and then I was like, "Oh, no. Here I go on a downward spiral." It just felt like I've always been independent, and I can't handle myself, but I shouldn't have to.

What has been kind of the biggest challenge for you in the music industry or in your music career?

Eraste: I think the biggest thing for me has been-- let me think. I feel like I don't have a music career. It's like impostor syndrome is real, but I just got started, and a year ago, I hadn't even met the people I was going to make this little album with, and I didn't believe in myself. And now that I do and I'm confident in my abilities-- because growing up, I didn't have parents that were proud of me or my parents don't really talk to me at all, and so I just kind of didn't know what I was capable of and I still don't. It's kind of an internal struggle. Once I'm confident, and I know what I'm capable of, and I believe in myself, then I think it will be a lot easier.

I was going to TCU on a full scholarship to be a religion major. My major was in Jesus, basically. I told my mom from day one-- I was like, "Sally, I don't want to go to college. Don't make me go to college." It was just kind of like, "If you're good at it, you should do it." I was just good at school for the sake of wanting approval and love and validation, and that got me a scholarship. I didn't know who I was, and I think that's so evident. I wanted to create something that I could explore and be a part of and have outside of myself, and so that's why I created Eraste. I was a stranger to my mental health and being in the city and being an adult and myself and what I wanted and who I was and being gay, all of these aspects of my life. I feel like finding myself musically and lyrically in what was okay to write and all of these things I've never written about or been encouraged to write about and these musical avenues that I've never been encouraged to, I don't know, I think that there's a lot of learning to do and a lot of aspects of who I am.

I feel like the market is so over-saturated with musicians? Do you kind of feel that competition, that pressure?

Eraste: Absolutely. I think what gives me a little security - and maybe it's just in my head. But I think a lot of people can write. And a lot of people have trauma. And a lot of people are going through stuff. And that's just being a musician and getting to reach into those places. But I think my tone is just really different. And I like that about myself. The things that make me, me, will bring something to the table that somebody else might not necessarily bring.

What would be your best advice for young women, especially in music?

Eraste: One of the main things that I've learned the hard way with people not supporting me or being there for me, or encouraging my talent, is that I had to really do it for myself. And so I think it's confidence, yes. Have confidence, but not false confidence. If you can get to know yourself and all of the things that make you the way that you are and your abilities and what's within the scope of that, if you can be like, "I can do this, and I believe that I can do this. I don't think that anybody-- nobody else saying that I can't do this is going to drive me away from doing this." And I know everybody's like, "Confidence and belief in yourself." And that's totally cliche, but I think it is really warranted. Just know yourself as much as you can because I still know maybe 1% of myself. But having that kind of like, "I have myself even if nobody else does," is kind of comforting.