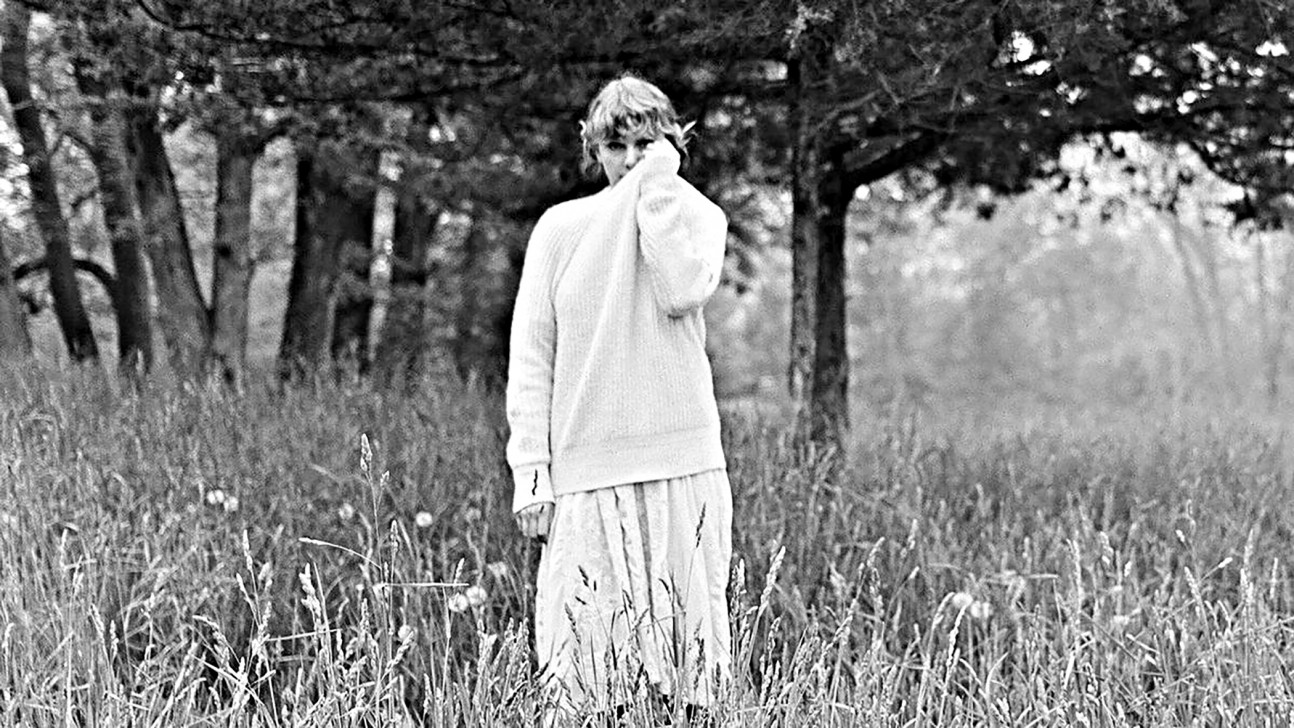 The funny thing about listening to folklore is that when I heard it, I knew it would be an album full of regret and melancholy accompanied by waves of sadness. I’d like to think of this as Red, but evolved. I guess who Red grows up to be.

I say it with every era. I am adamant that Taylor writes her songs that correspond about the stages of life that I’m in. I really don’t know if I’ve ever gotten this deep with y’all, but I’d like to think we’re all a New Nine family now, so when I first heard Red, I was going through one of the worst breakups of my life.

To be fair, it was also my first. It was that year that I realized I was done for good with my first and longest relationship. The tl;dr version is that we were highschool sweethearts who fell too fast and didn’t realize the world was bigger than we both were. It wasn’t healthy, we were off and on for too long and overall detrimental to each other’s mental health.

folklore, unsurprisingly, made me relive some of my worst parts about this relationship. But as I sit and listen to it for the umpteenth time, it’s given me a bit of perspective and albeit, peace. In the eight years between Red and folklore, I've realized a lot about myself. These realizations or epiphanies (get it?) have included my self-worth, discovering that a relationship shouldn’t drain you, much less manipulate you or make you feel inferior. It’s through all of the various experiences that I somehow have hope and believe that all the heartbreak faced can be very ultimately decided by an ‘invisible string’ that ties me to the love I deserve.

However, if you didn’t think I didn’t picture some alternate life with said ex for about five minutes when I first heard ‘the 1,’ you’d be wrong. But as soon as Taylor said, “I’m doing good, I’m on some new shit” I felt that echo in all my life decisions. I will say I got my closure years ago and I’m very glad that this album is here to showcase the life I had, the life I once thought I wanted, and the life I’m meant to get.

Now, to the present time. Belting “this is me trying” felt like a breakup song pleading for that last chance initially, but once I dissected the lyrics, it resonated with me the most. I’m not vulnerable at all. I know, when y’all read these long-form opinions, you’ll see I care a lot, but for whatever reason, I should air it out to you, New Nine audience, than to talk them through with people I care about. This specific track hit in the sense that I’m working to be better and allow myself some grace - especially when letting someone else in or see a side of me when I am letting all of my walls down.

I cannot let this piece go on further without giving a nod to mirrorball. This is possibly my favorite track of the album; it’s freeing and just makes you want to dance around in circles around your room, hell even the streets. While it can be a song you want to sing to someone you care about, I realized this was a song from Taylor to us, her fans. Much like we adapt and change to compromise with people we adore, she does this for us.

I think the special part of Taylor and how she’s impacted my life is not just the soundtrack for the worst and best moments of my life, it’s been the people she’s connected me with. The scene I keep replaying in my mind is the infamous West Hollywood dive bar night. My friends and I gathered for an impromptu evening of seeing friends in town and we decided to go to karaoke literally on Hollywood Boulevard. You can rarely get me to go there any day, but exceptions include Taylor Swift karaoke. A total of seven of us took charge of the stage and sang every track in the book just before Lover was released. She’s given me the best people - the fellow fangirls and concert go-to’s and I don’t know think she’ll ever understand how important she is to me. (And, yes, that’s me belting out “I’d Lie” on your TikTok feed hahaha!)

When this album dropped, I immediately texted all of my closest friends and needed their dissertation on the album and their top five tracks. This is probably my favorite tradition for release week. I say it all the time, but fandoms have become my security blanket. To think Taylor’s been there for me for the last fourteen years seems silly, but it’s the truth. Entering this fandom, I dove DEEP, but somehow all the memories created after that take priority in my brain. It’s these bits that I continue to treasure and look back on and relish when I’m having a bad day.

Also, in case you’re wondering, I am indeed the girl from TikTok who was threatened to get kicked out of her sorority because she couldn’t say hi to Taylor in a restaurant in Nashville. I know, I know. I’m telling you this is a top 5 regret for me. But all this to say, is that Taylor if you are reading this somehow, know that you are the best friend that’s been there for me without having to be there. You always know what to say when I need it and I can’t wait to see you on tour again sometime in the future.

I couldn’t have created this post without the various stories from Swifties across the world. The best part about any fandom, in my opinion, are the people it connects you wish so I’m so excited to share their stories, too. 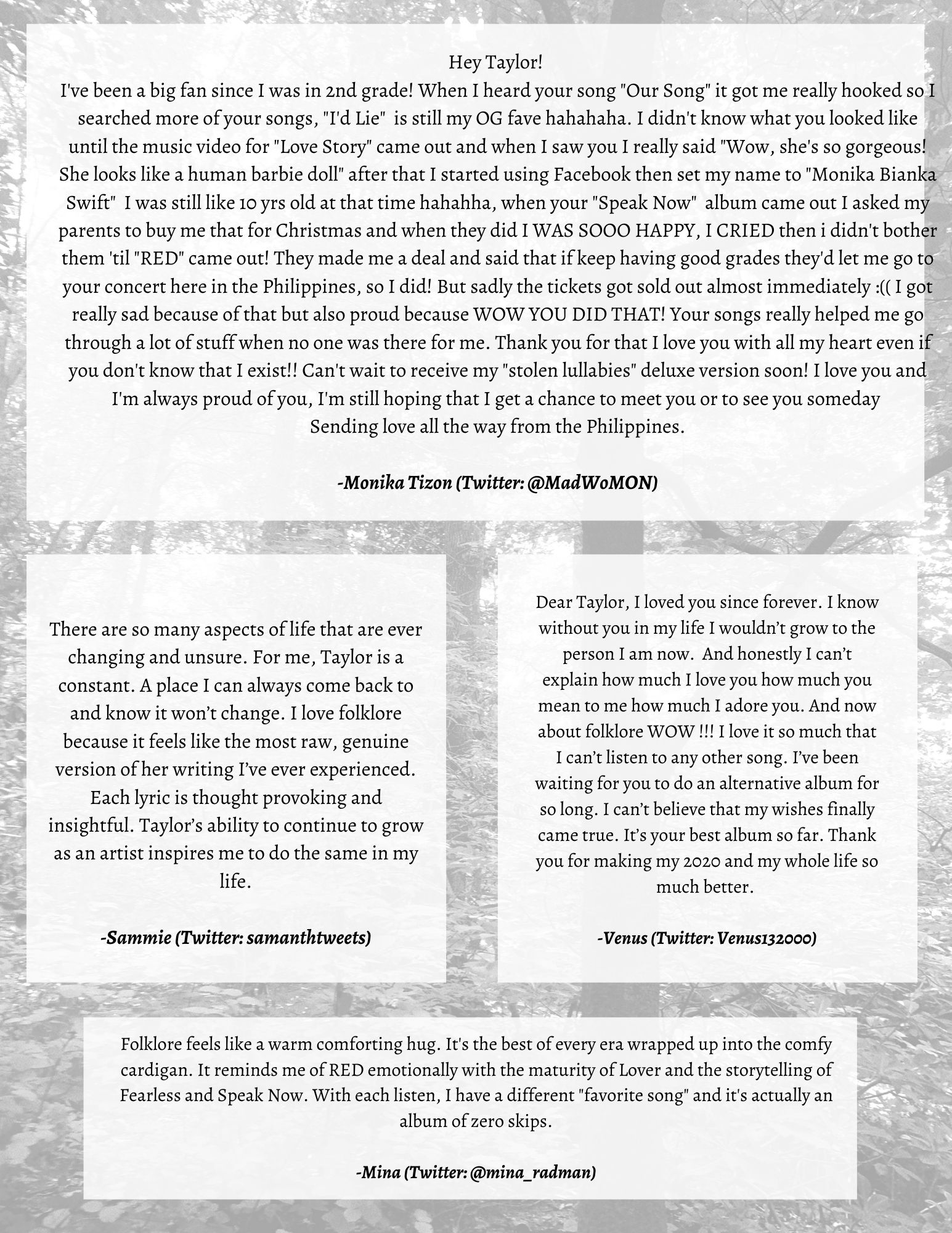 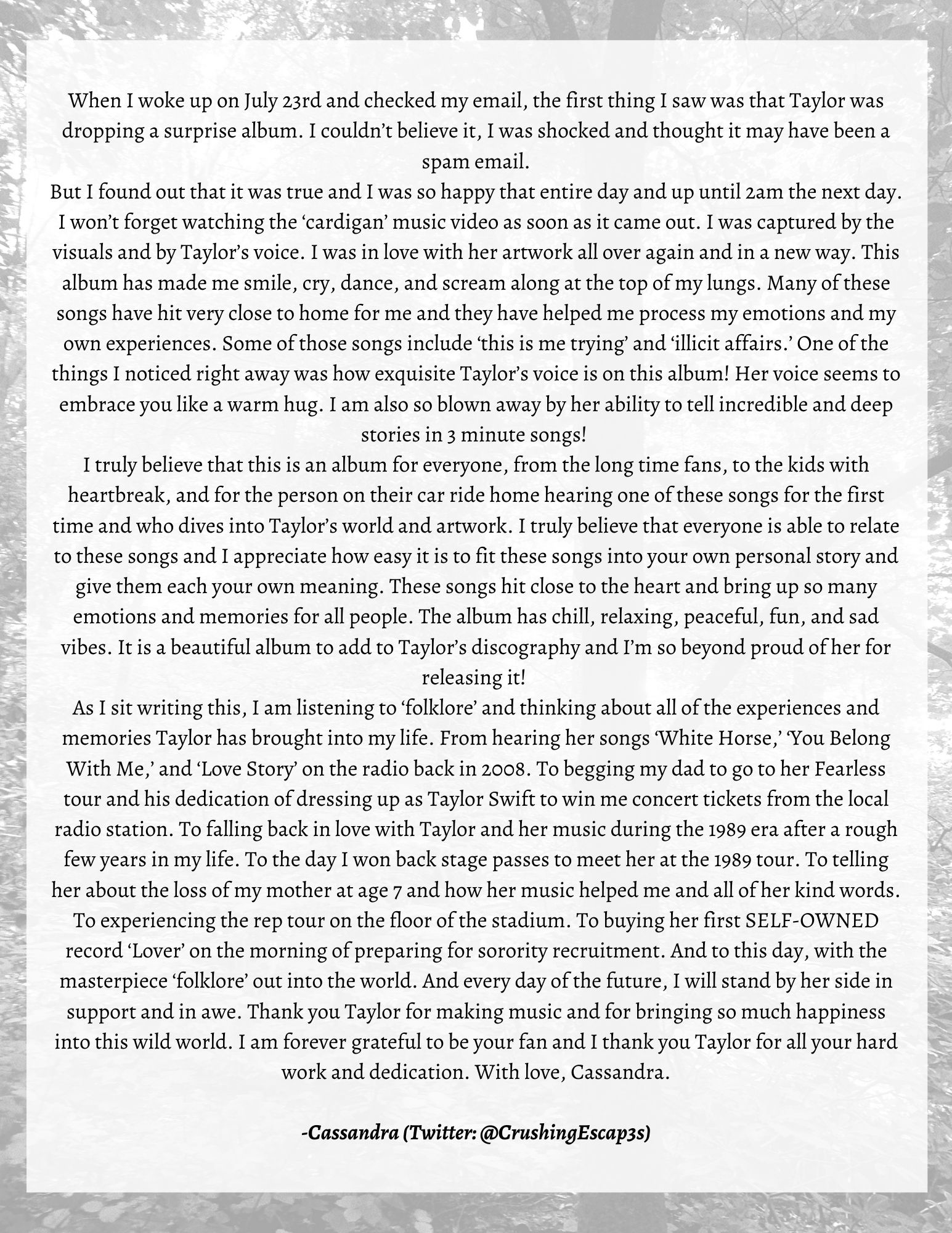 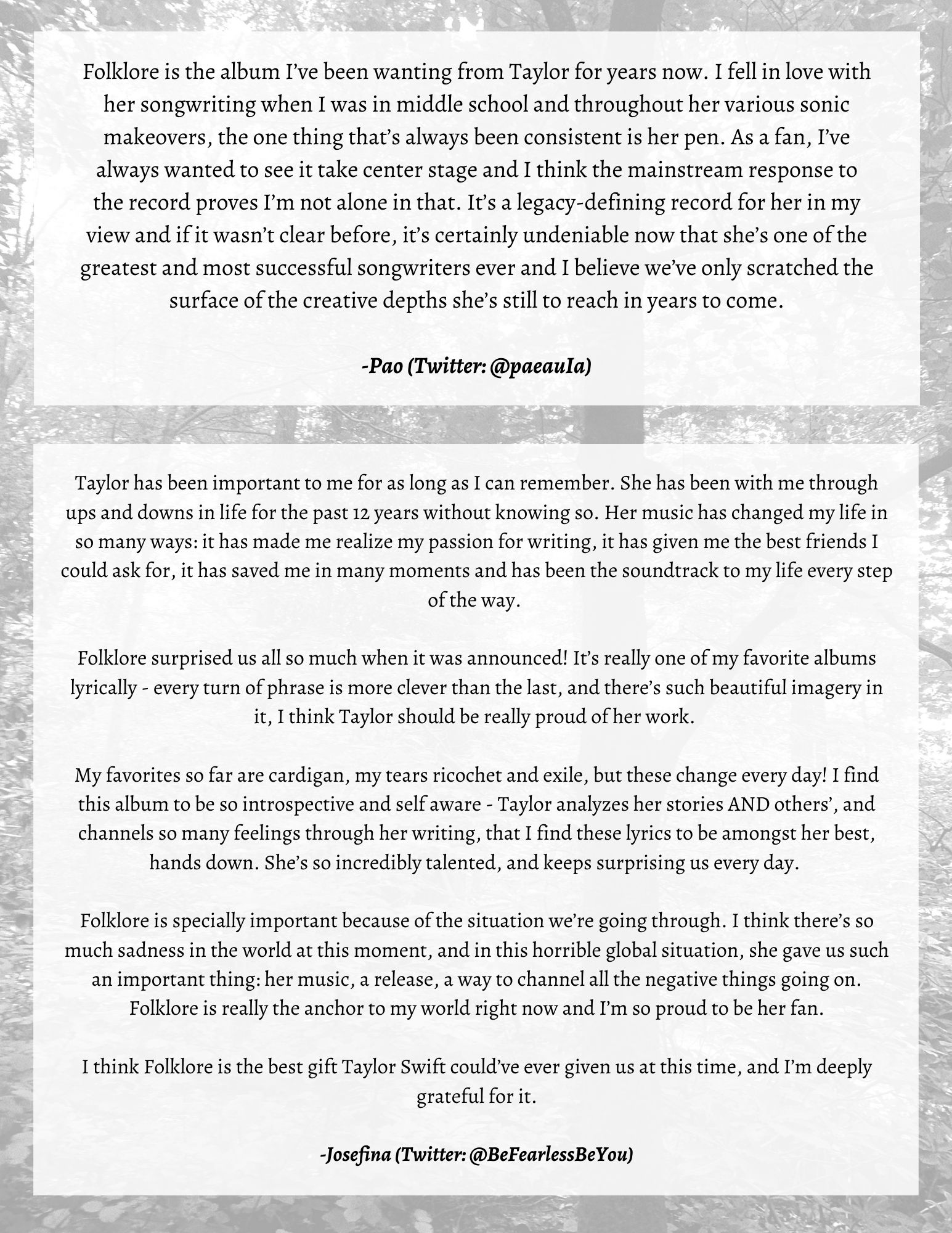 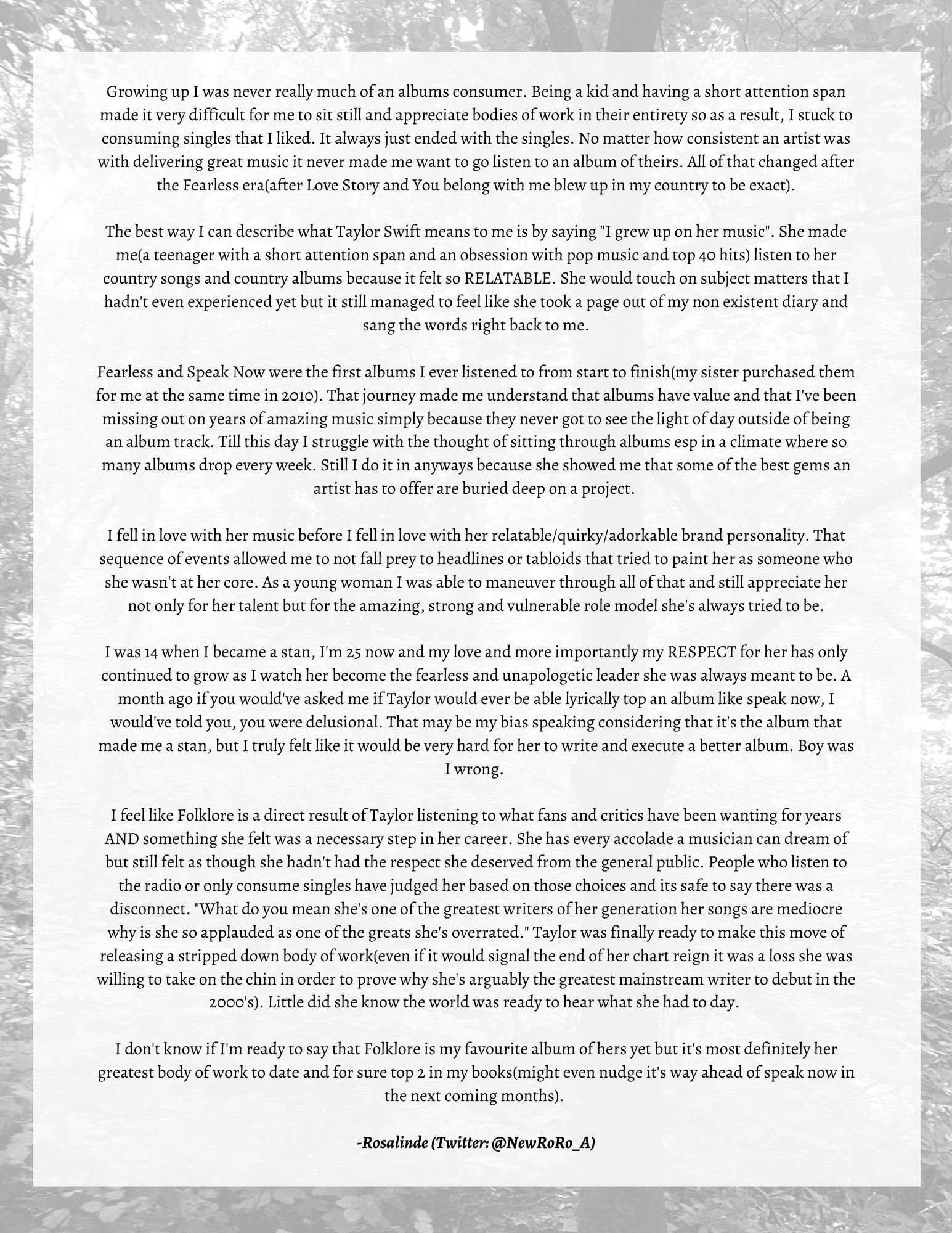 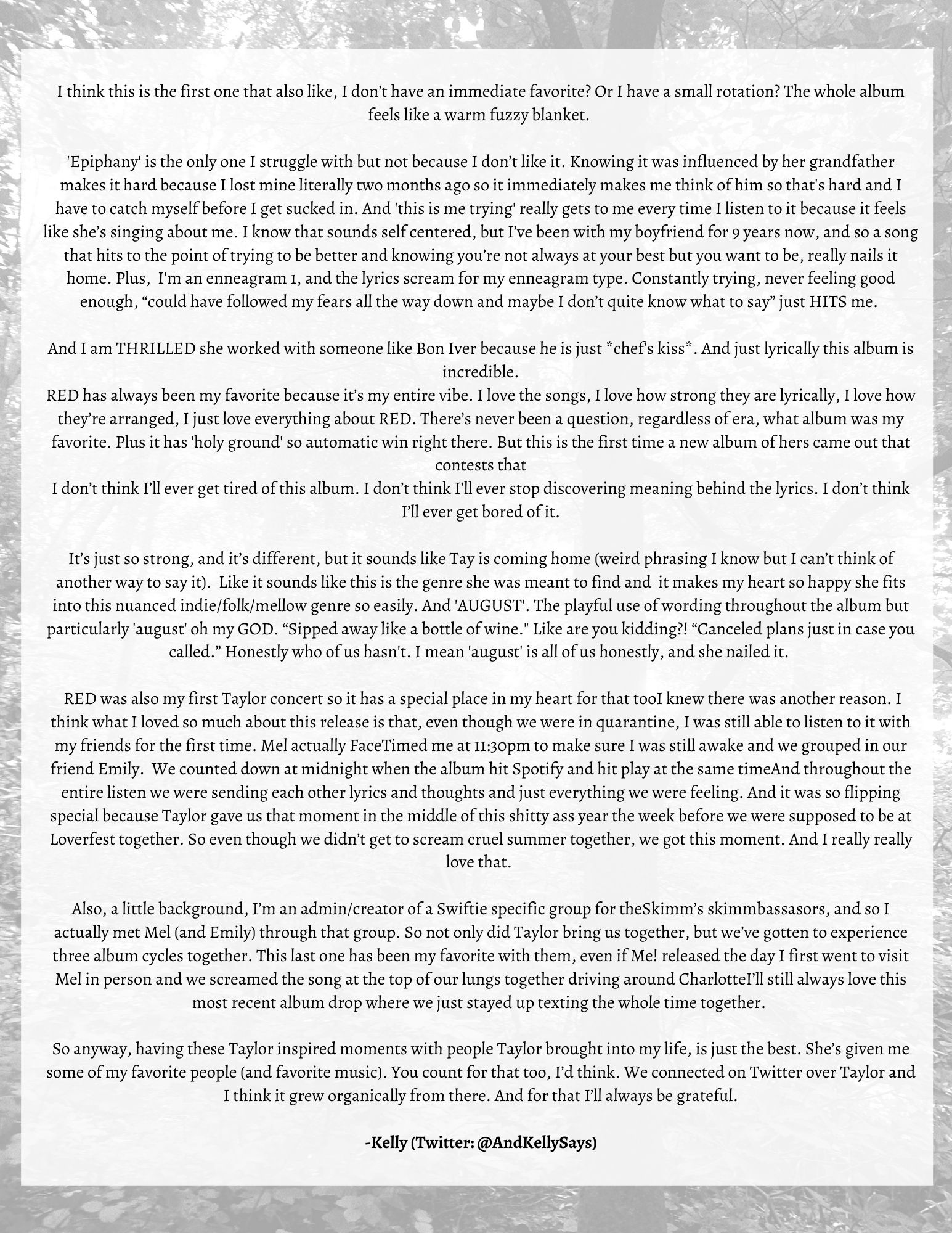 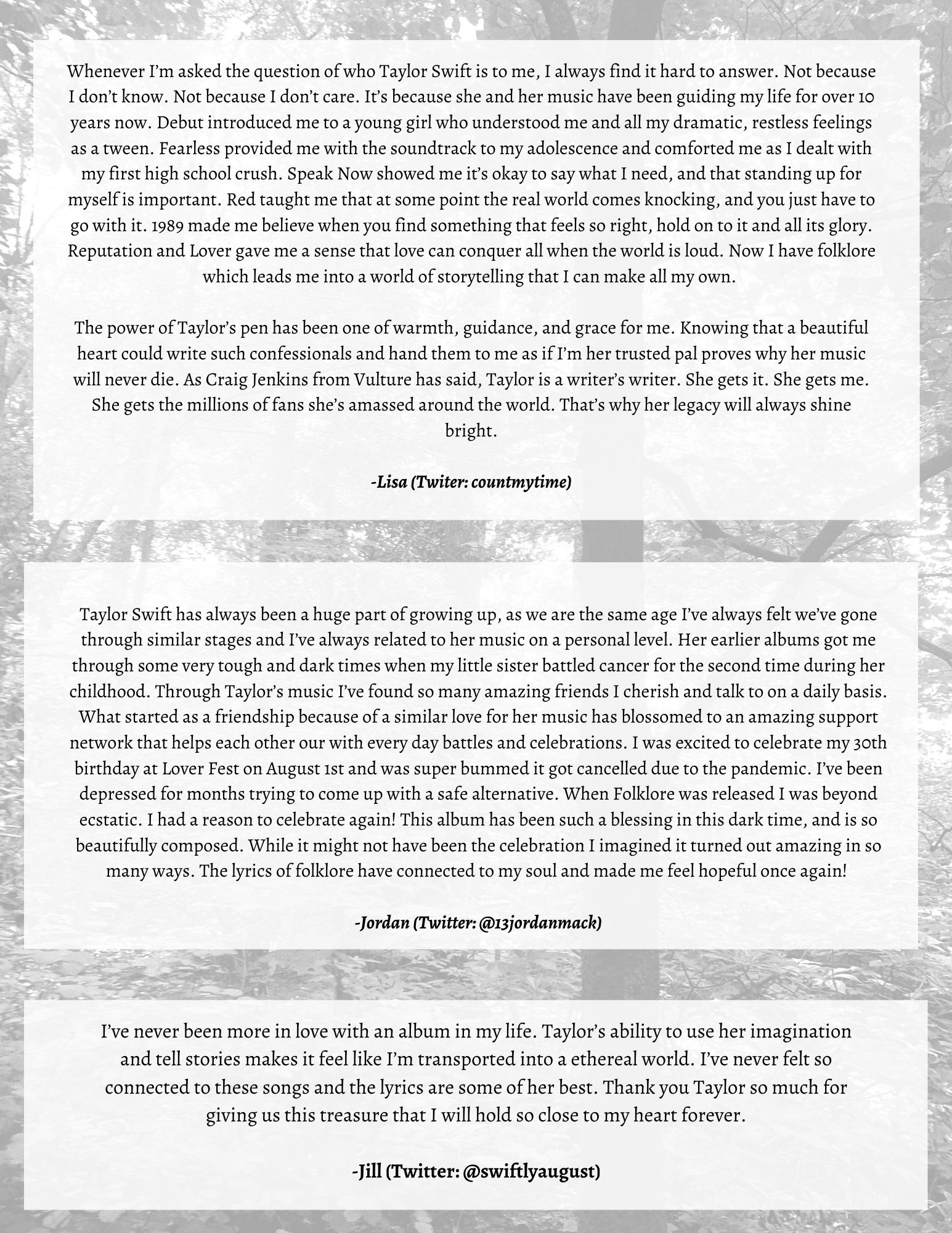