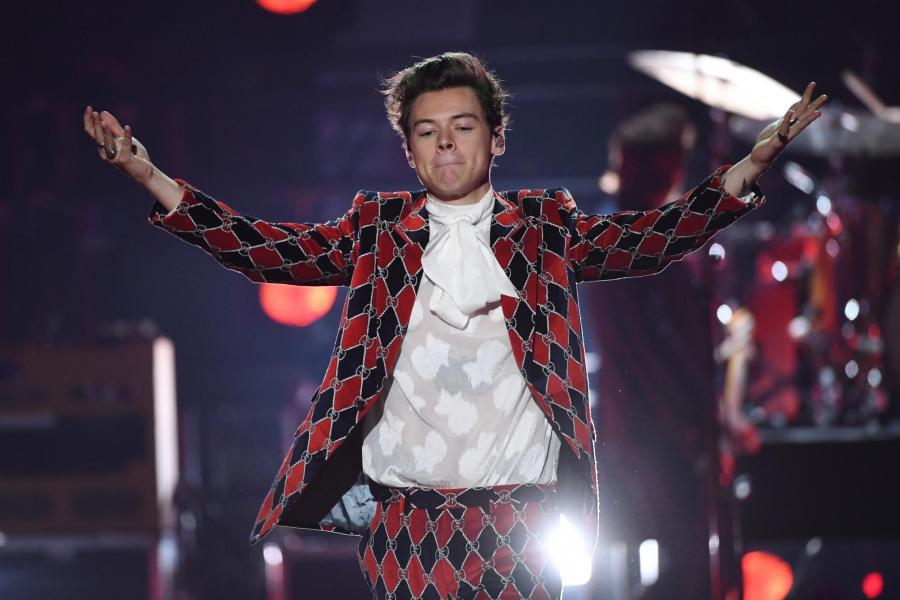 The anticipation I experienced for Harry’s show in Dallas was unlike any other; I was happy and excited and anxious and even kind of nervous because I wanted this show to be everything I had built it up to be in my mind. I don’t know why there was ever even a miniscule doubt in my mind that it wouldn’t be, but it’s one of those things where you love someone SO much that you’re like what if i’m delusional? But y’all I am here to tell you - I was not delusional about this. Harry Styles puts on a SHOW.

I’ve truly never cried at a concert before, but after Harry, I can no longer say that. When his silhouette appeared behind that curtain, I screamed like I have never screamed before and didn’t stop for the next hour and a half. From Carolina and a rendition of Story of my Life that he made his own to The Chain and Kiwi, I was all in; my seat was on the aisle so I even got to jump and dance all over the place. The atmosphere Harry creates in the room truly makes you forget about the world outside - he jokes, he talks to people in the crowd and he looks happier than he’s ever looked singing his own songs to his fans. I felt every emotion to the utmost ability that night, and I was so happy to share it with other fans who were feeling these things with me.

When Harry was about to sing his last song, Sign of the Times, he gave a speech about how proud he is to be an artist who has so many fans who are women, saying “I’m so honored to be able to perform in front of such a strong group of women every night.” And I cried; how wonderful is it to be a fan of someone who is literally the best person ever? It’s truly overwhelming - overwhelming on a regular basis but especially in that very moment. Thank you, Harry, for putting on one of my favorite shows of all time and thank you for making me proud to be a fan of yours every single day. ILYSM.

I didn’t get tickets the first time so this recap almost didn’t happen. And thanks to the concert gods and TicketMaster, you’re probably very relieved you get to hear my experience at H’s first solo show. Harry sold out The Ryman in Nashville and the concert was everything I wanted and more. Turns out he catered his tour around that venue and date, so it made it all the more special. MUNA was a fabulous opening act and so appropriate for the show. I’m sure I was one of the very few who knew their songs and screamed when they came out with “I Know A Place” and I KNOW the mom beside me was judging quite hard.

And with it being Nashville, Harry also brought out country star, Cam and she performed a few songs. She donned a gold jumpsuit that was apparently taken from Harry’s own closet - at least that’s what he said.

Harry, of course, didn’t disappoint. It was exactly what I imagined - some quirky dance moves, a few dad jokes, and even a cover “Chains” by Fleetwood Mac. I didn’t expect him to cover “Girl Crush” by Little Big Town but I was pleasantly surprised. To finish out the show, he sang his debut single, “Sign of the Times” while wearing a Gay Pride flag. To say his concert was anything but an amazing experience would be a lie. Plus, does it really get better than screaming “I’m having your baby!” at a Harry show in an unironic way?

I was never a One Direction fan, but after I heard Sign of the Times I was a full-fledged Harry fan. I patiently awaited the album, I reviewed the album, I listened to the album, and got in fights about the album. I woke up at 4 a.m. to get tickets to his show in Austin (I was vacationing in Hawaii but I don’t want to brag about my jet setting ways). I treated myself to a solo dinner of ravioli and prosecco at Taverna before I went to stand in line.

“Who is Harry Styles again?” one of the many moms at the restaurant asked, “He’s was in One Direction” the other answered. Their daughters had been waiting in line all day and they were treating themselves. I snickered to myself. I know that not a lot of 26-year-olds would attend a Harry Styles concert alone but I was standing my ground. “This would be our next huge rockstar, this would be iconic, this would be the concert I tell my grandkids about like when I hear people discuss The Beatles or The Rolling Stones.” I firmly believe this, because as I walked past the long lines to get inside, watching the girls giggling amongst themselves, it felt iconic. When the floral curtain dropped to reveal Styles in a pink suit with his backing band I lost it.

I just want to take a moment emphasize that someone brought to fame with a boy band has brought back the rock show, an actual rock show with instruments. Yes you can argue many bands for this case, but to getting a sold out show of teenage girls screaming at a rock concert is a difficult feat. When you have monster stadium tours with backup dancers and elaborate stages, to get a sold out show based on music is something magical. With every song he interacted with the audience, smiling at girls and he just looked so happy and thankful. For one of the biggest stars right now he seemed nothing but humble.