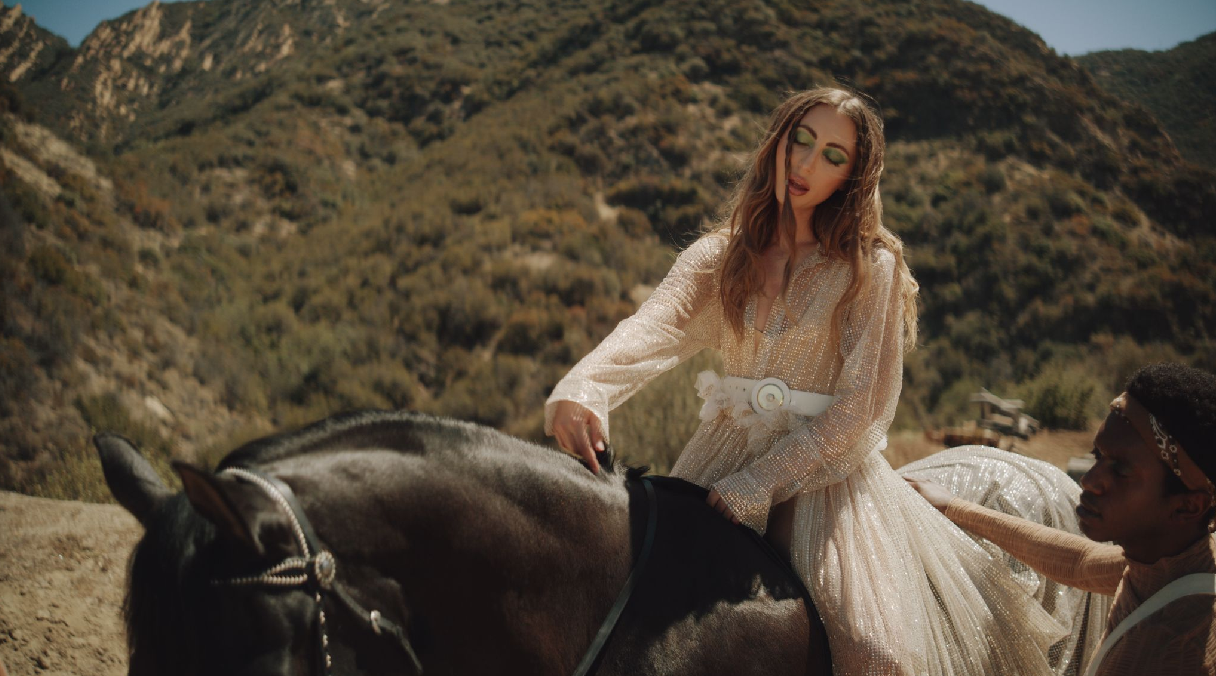 Jazzie is an LA-based indie-pop artist and the 26-year-old daughter of Jessie Colin Young, lead singer of The Youngbloods, known for their iconic 60's anthem," "Get Together." She's been writing music all of her life, but she just started releasing her own material last year. Jazzie wrote the entirety of this EP by herself, a few months into quarantine in the states, and as we spend our time elsewhere but our couch, we're listening to this, too.

Jazzie, what was the inspiration for the EP?

Jazzie: During the beginning of quarantine, I started writing a lot of songs, and by mid-June, I realized that although they differed in subject matter, they all had a common theme of maturation and personal growth. I really wanted to put all those songs that I had been writing into one body of work that would tell my story, my trials, and tribulations of the past few years. This EP is really part journal entry part-time capsule because each song is so intimate but also captures that specific time in your twenties when you're really trying to figure yourself out: what you want, what you don't want, who you are, etc. It's such a tumultuous and special time that's both deeply subjective while still being universal.

Did the pandemic and quarantine shape the way you created music and how you wrote this album at all?

Jazzie: Definitely. I mean, all the songs were written by me just sitting on my couch. Quarantine gave me a lot of time to just sit, feel, and reflect on my past, and I think that really helped me delve into some emotions and situations that I had previously been avoiding. With the outside world on standby, I was able to really focus on myself and my wants without any distractions. Writing this album also gave me something to work on and really helped me focus during such an unprecedented time, and I'm very grateful for that.

What song are you the proudest of?

Jazzie: Hmm, that's a hard one because I have some favorites, specifically with how I wrote them, but there are other songs that really taught me a lot and changed throughout the writing and production process. So, it's hard for me to pick just one as they all really stretched me as an artist in very different ways.

What about the song you're most excited for fans to hear?

Jazzie: I'd have to say either the title track" "grown up & grown apart" or "fuck me over" for very different reasons. "grown up & grown apart" is one of my favorite songs I've ever written. It's such a tender and intimate song that I believe has a really relatable subject matter. It's also one of the more" "folk" songs on the album, and I feel like it represents the singer-songwriter in me." "fuck me over," on the other hand, is really more of a dark pop vibe and one of the more rhythm-driven songs I've written. I really enjoy its sassy in your face nature and want to explore that side of writing more.

Jazzie: That's just a person who's trying to find her place in this world, to be happy and have passion and adventure. Music is just my medium for that; it's my way of understanding the world and feeling in sync with it. It's how I connect with people, and I hope that they feel that when they listen to my music.

Tell me more about your creative process and how you create music?

Jazzie: Usually, I start with lyrics either based on an idea I've been mulling over or directly pulled from a personal experience. Sometimes it's a little bit of both. Then I'll go over to the piano or guitar and mess around until a melody comes to fruition. Sometimes the lyrics aren't finished until I get an idea for part of the melody. For production, I usually have an idea of a direction I want the song to go in, and I'll send references to my producer if I can't be there in person (like during quarantine), or we'll sit down and mess around and see what feels right. I really gravitate to more minor-toned, darker styles of production and songwriting. I'm a sucker for a melancholic undertone.

Jazzie: I've just released a trilogy of music videos for my songs, "violet," "fuck me over," and" "grown up & grown apart," that follows my journey from avoidance of my true self and emotional suppression to emotional growth and freedom. I'm really proud of how the music videos turned out and the story-based art that my team and I created. I feel really lucky to have such creative control over my story and the way that I want to tell it. I have one more music video I will be releasing for the last song off the EP, and it's going to be very different from the videos I've previously released. I'm super excited for everyone to see that. After I finish out the visuals for this EP, then it's on to more writing and recording and hopefully touring!