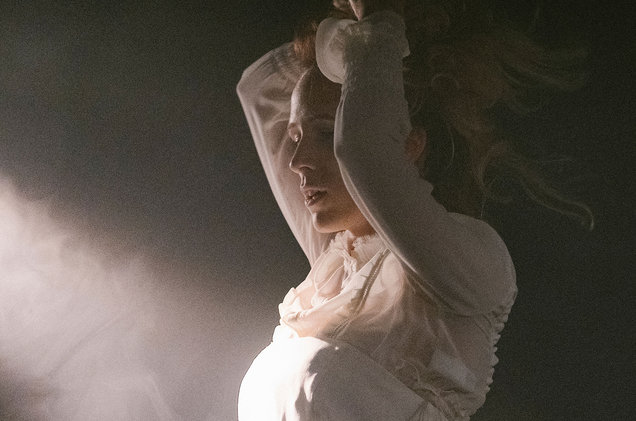 Katey Brooks has a dreamy voice and it’s clear that she feels every word she sings, the best artists write from experience and it’s a rare artist that has experience like Katey. She grew up in a cult and found refuge in songwriting.

She says, “It was definitely different, although to me and my sisters it wasn’t different at all.Coming out of it and growing up and getting older and hearing other people’s experiences. We realized how crazy it was.”

Her mom “saw the light” and got her family out. Even though they don’t talk about it too much. Katey was always singing and found that writing helped her process her emotions.

She says, “I know it had an effect on how I felt as a child and growing up. It definitely came out because that’s what happens when you go through something traumatic. I’ve gone through some pretty tough times. I always sang. I thought if I wrote something I’d feel better. I know that being someone who sometimes struggles with connecting, directly, being unable to directly connect sometimes. When I sing it helps me do that.”

Her life was laced with pain. Her mother died when she was 22 and she lost her best friend shortly after, but she grew from that pain and learns that her emotions and songs could not only help her get through that but could also help other people.

She explains, “I think there have been times in my life where if I wasn’t a musician I don’t even want to think about where I’d be right now. it’s been a life saver. I’ve got a beautiful family and friends but when you’re in a really dark place it’s hard to even feel grateful for that. When I make a song about it, I can make a point to get through the hardship or the grief. I’m very lucky to be able to make something beautiful out of hardship.”

Katey feels vulnerable when she performs, like she’s reading her diary to an audience of strangers, but when it came to speaking out about her sexuality she knew she had to make a statement.

“I’ve sort of been on a journey with it, when I first started writing, we were at a point where things had more a stigma. As a teenager, my friends and family were amazing, but publicly laying it on the line, I felt very exposed. For a long time I thought I accepted my sexuality but I still wasn’t comfortable with it. It’s not that simple. It wasn’t until few years ago I thought this isn’t just “okay” it’s really beautiful.It’s becoming easier and I think it’s important to be a part of the people who make things better for anyone struggling. It’s not going to be easier for people coming out if they don’t see you doing it.”

Her song, “In Your Arms” explores a deep relationship she had with a woman. It was her first true heartbreak, a breakup where she had to fully feel every emotion and work through the pain. The kind where sometimes love just isn’t enough.

“It was quite a rollercoaster. I loved her and I had to walk away. It was very difficult. We broke up because it was complicated, not because we didn’t love each other, but we didn’t know if we wanted the same future. It was heartbreaking and the first breakup I had that I allowed myself to feel it. I promised myself I would get as much out of it as I could and the song was part of that. It fell out of me. It was my way of telling her, ‘I actually loved you more than you realized.’”

Her heartbreak really shows when she performs and her ability to connect with people is her strong point. Those are the shows that stick with you, the ones where the artist seems to be singing just to you. Katey told me about one specific show that she can't get out of her mind.

She explains, “It was an awful show. I was is such a bad mood. I thought it was going badly and I thought the audience hated it. I got off the stage and apologized to my band and had to leave right away. I was in my car just cursing myself. My piano player came out and told me this woman wanted to speak to me. I went in and she said, ‘I’m recovering from a  brain tumor and it’s been a total rollercoaster and I haven’t felt any emotions for eighteen months until tonight.’ That one confirmation from this woman, it made me feel like it’s worth it.”

Aside from the industry problems, Katey's biggest challenges are in her mind. She can be her own worst enemy.

“I’m getting better at that. Maybe I’m maturing but I’m learning how to look after myself a lot better than I did," she says, "I haven’t always made the best choices or gravitated toward the healthiest people. I’m starting to have this kind and generous team that’s grown really organically and it’s taken years to let people in."

When I ask her what her best piece of advice for young women is, she emphasizes, “Cultivate self love and self care because that’s what will make you happy. I spent years thinking other things would make me happy and none of them did the trick. You realize that happiness comes from things that are so much more simple than we think. Self love and self care, look after your little heart.”