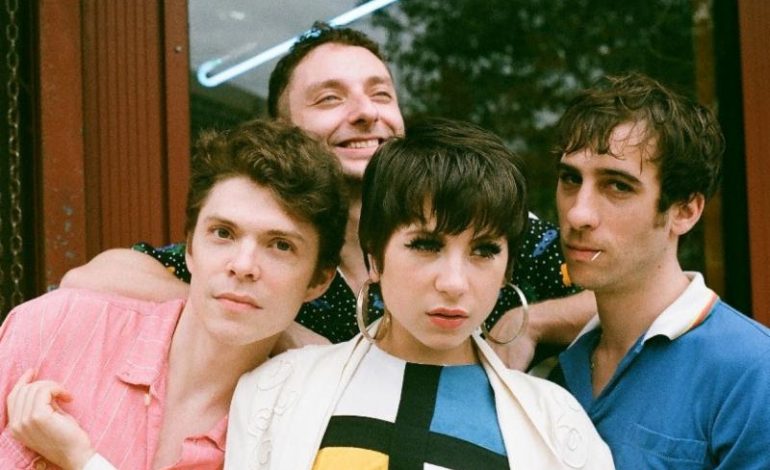 It would be difficult for me to find a band I’m more emotional about than KITTEN. When I first saw them at SXSW two years ago I became addicted.I’ve never seen a lead singer like Chloe Chaidez, who seems to sing so powerfully while also contorting her body on stage and maintaining a showmanship that the most iconic rock stars would envy. It was hypnotizing.

They headlined our Girls To The Front Party this year and I was beyond nervous that the stage was too small. It wouldn’t be enough for how they perform. Chloe shook her head, “No this is perfect, this is what we wanted.” She looked at the small wooden stage in the backyard. The crowd gathered, the band started. They started strong with their new song “I Did It” a pop masterpiece, they went through their catalog of 80s tinged dream pop. They covered The Cranberries “Dreams” which warranted loud screams from the crowd. Then in the grand finale Chloe climbed up the tree on the side of the stage and thrashed her head around finishing the set. Our jaws dropped.

While a lot had changed with the band that energy stays the same. It’s their biggest strength and always has been. There aren’t a lot of bands that I would push you to see live over a recording, with Kitten it’s almost a necessary part of the culture.

Their new album, Pink Champagne, is different from their other projects. Chloe explains, “It was written very collaboratively, not that the other music didn't involve a lot of collaboration, but this album was written with four people very collectively, and I've never done that before. It'd just be me and another person. So that's been really great. It was made in New York, which was my first album made in New York.”

The shift in the band is due to a change in environment. From Los Angeles to New York where they reinvented themselves.

Max explains, “They stayed at my place. And we just by chance happened to go into the studio together, and we did a song, and it was super easy. So they just came back two weeks later, and we just kept writing, and it was just fun and natural.” Chloe adds, “I would never have predicted that me and the guys that are in the band now, would have been in a band together.” Max laughs, “She, effectively, ended my last band. She's destructive in nature in ways, but in the best way.”

If Chloe is destructive, it’s only to rebuild and start new. The energy between the band is palpable. With their lead single “I Did It” we already see the narrative of Chloe switching cities and attitudes and embracing the new direction. The melancholic “Strange Embrace” and the dynamic “Pink Champagne” we see the album taking form, going down a dreamy path.

Chloe explains, "It wasn't laborious. It was just natural and fun to write and make music together, and now to play together. It's just something we've been talking about all year leading up to it"

It’s especially difficult to capture the essence of their performance. It doesn’t seem too rehearsed, but it’s so well choreographed. They don’t miss a mark but they leave room for surprises. There’s always an element of surprise. You can’t ever know what Chloe’s going to do but you can bet the band is in tune with each other like they all share a brain.

She admits, “We rehearse a lot, but something that I think is really special in a live show is sort of planned spontaneity. So you rehearse for freedom, right? So you're like, ‘Okay. At this point in the song, for this many measures, you're going to be able to be free and do whatever you want. When I hit this cue, we're going to go back into the chorus."’And cues and signaling takes practice in rehearsal. I think we talk a lot about how we kind of want to show off how we play instruments.”

They manage to make pop music skill-based. They show off their skills as musicians but they do it in a way that’s not pretentious. Each member is talented but blended together their music is accessible. You want to go to the show, you want to watch them play spectacular music but you’re also there for the spectacle itself.

Max says, “We've all been doing music so long that we've all gone through phases of being too cool or not too cool. We've kind of arrived at a place where we just know what we like, and we like effort, and musicianship, and just the basics. So that's where kind of channel our energy, and that's what we value.”

Of course this isn’t The New Nine without bringing feminism into it, so I ask Chloe about what she wants for women in music. It all comes down to more collaboration and less competition. She says, “When a guy plays keyboard he gets with another guy who plays keyboard, and they make a fucking band. Girls, they see another girl doing music, and they immediately pit themselves against that girl. So they don't hit them up to make music. They align themselves against them. We need to be actually encouraging each other's musical endeavors and collaborating. The competitive aspect has got to go.”

Listen to their new album now, follow them on Twitter and Instagram and please, if you have a chance go to the show. I guarantee it'll change your life.