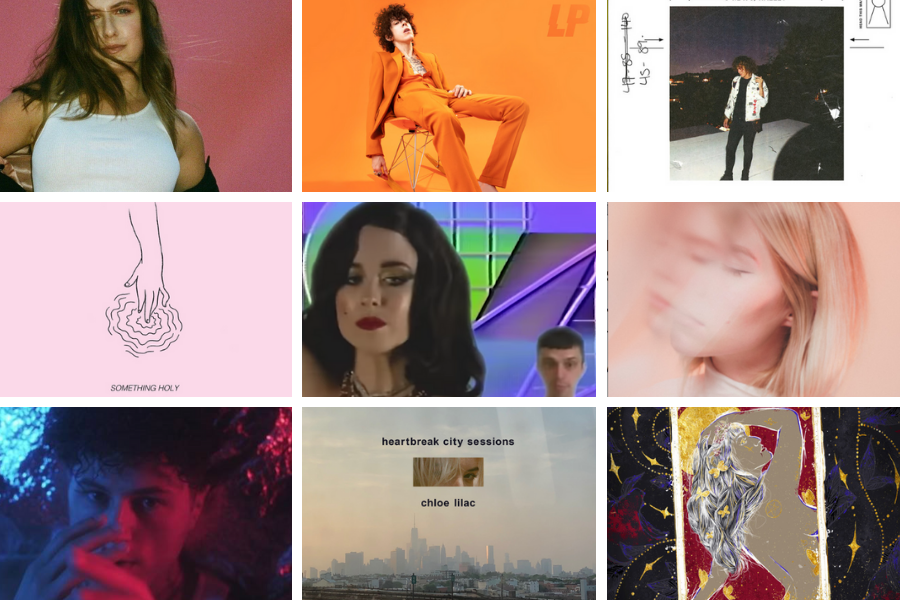 Alice Phoebe Lou blessed us with this new song last week and she also announced her debut album Paper Castles which will come out March 3rd and be followed by a tour.

Alice explains that Paper Castles is “about nostalgia, about growing into a woman, about the pain and beauty of the past, about feeling small and insignificant but finding that to be powerful and beautiful, about acknowledging that childhood is over but bringing some of it with you.” “Something Holy” specifically, reflects “the moment that I managed to get over the main hurdle of my past traumas with sex, with men and with my own deeper understanding of intimacy and what it means to be intimate.”

I love SHY Martin's light, angelic voice. This song has everything I love, little echoes, a gorgeous chorus, and a feeling of longing. It's that moment when you really want to hang on to something just a little longer before you have to face the facts.

I saw Chloe Lilac open for Sasha Sloan this week and the girl is going places. She's so adorable and has this captivating energy. Her vocals are stunning live too.

"Heartbreak City" is about how toxic hookup culture can be. Her honest lyrics are a fresh take on the subject.

Chloe says, “heartbreak city is a song about the ways hookup culture in new york city has objectified myself and other young women I know. Specifically it’s about one guy who really showed me how gross hookup culture can be.”

I love LP so much it's unhealthy. Her last album changed my life and I cannot wait to do a deep dive into Heart to Mouth, but first let's just enjoy "When I'm Over You" which was released earlier this week.

LP has such a gift for expressing heartbreak in a relatable way. She sings, "Do the thing in a new way. Forget the words that I heard you say. Tell myself it’s a new day. Until it’s true."

She has a tour coming up and seriously you will fall in love if you see her live. Guaranteed.

Niki Black kills it with the symbolism in her music. Her latest "Hallelujah" is full of little details.

She says, "Hallelujah is a song about losing faith. I wrote the lyrics from a perspective that the faith I am losing is not tied to allegorically just to God and religion, but is also parallels a romantic relationship or an addiction. The song is an ode to giving up a relationship that was designed to keep you powerless. The beginning of the song includes a soundbite from a mass I experienced in the Duomo in Florence, Italy that I snuck into and recorded on my phone. I was actually kicked out of the mass because the priest could tell I wasn't catholic (I was born Jewish) when I didn't hit one of the normal cues in the worship. The irony is pretty hilarious."

With the rapid rise of Cheat Codes, the trio has also made it a priority to also focus on their own creative endeavors. Before he was collaborating on EDM hits with Demi Lovato and Fetty Wap, Trevor Dahl was just making music on his own terms.

Now, going by his surname, “Dahl,” Dahl is returning to his solo roots. "Think About Us," the first single from Dahl’s project, is a hypnotic millennial breakup song detailing his most recently ended relationship. “You hit me with the unfollow, now baby girl I feel hollow,” Dahl laments in the first line. With a hybrid of influences from electropop acts Bazzi and Lauv alongside the lyricism of John Mayer,

Dahl reveals his talent for being a jack of all trades: he wrote, produced and mixed all of his music. “I’m the only person touching the songs from start to finish, which is rare,” says Dahl.

Look at our Jenna Raine absolutely crushing it. We already love the song "Us" so much and this video really cements her position as one of the biggest up-and-comers out there.

WE ARE TEAM EBEN FOREVER. Seriously his songs are so catchy and this video is amazing.

Here we find our boy EBEN having a tough time but he'll be alright. It's a little dark and a little funny and all amazing. Make sure you catch the end.

While we love all Nightly songs, "Who Am I To You" was definitely due for a video, the song is so damn catchy. We love this moody blue and red vibe. The song is off their latest project "The Sound of Your Voice" and we're hoping this means maybe a headlining tour soon? Right guys?

Lila Drew!!! This video makes us want to go back on our Myspace page and wear barrettes in our hair and write super emo notes so that our crushes notice us. This woul definitely be our homepage song. Am I making myself look old?

I love Allie X. She was my most listened to artist according to my Spotify this year. When I watch her I just think "Wow this is an icon in the making." I love this style and I love this song. Her voice is insane. That's all.