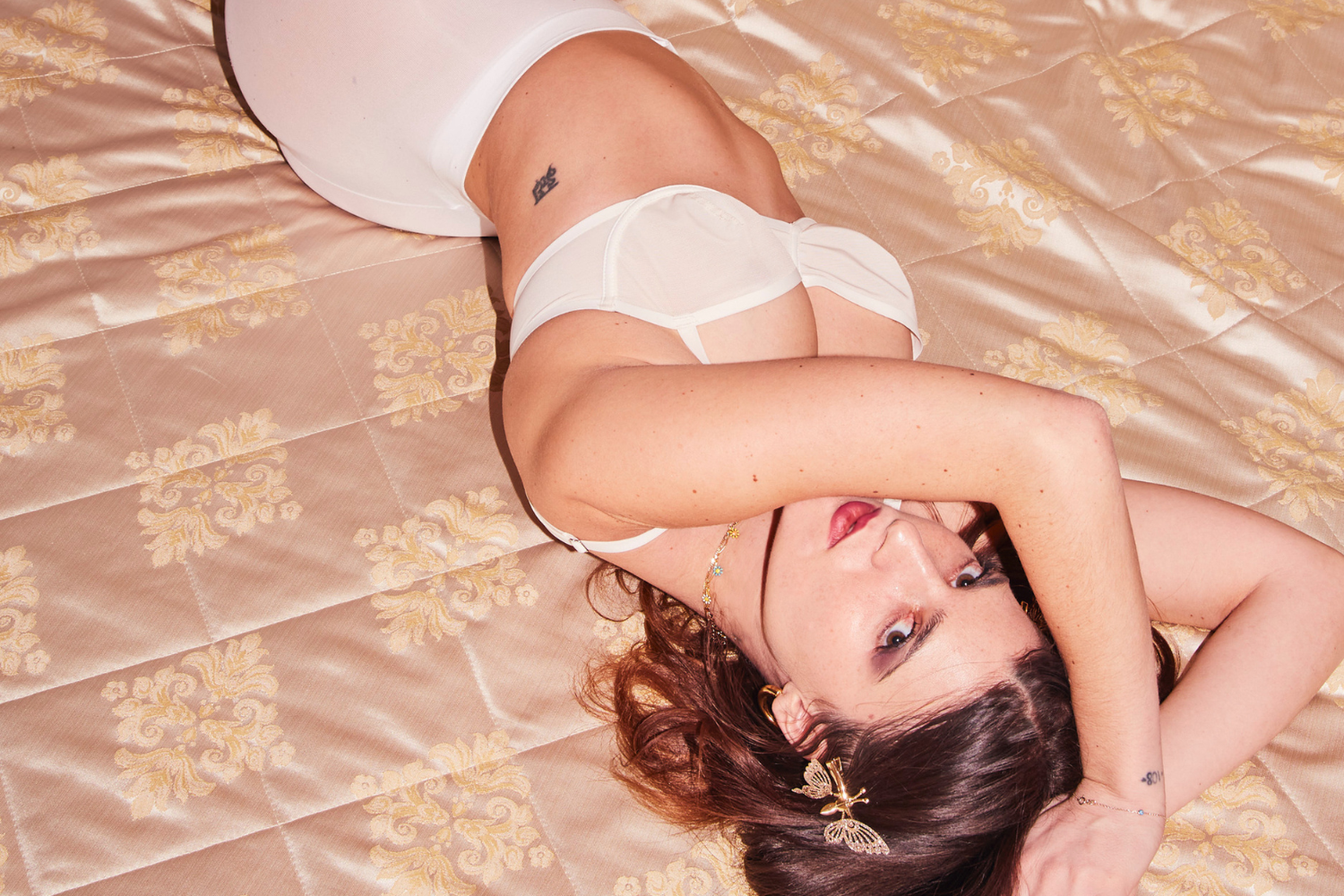 After I heard Revenge Wife's song "Earthquake" I was immediately hooked. The delicate vocals, the whimsical chorus, it all worked so perfectly together. The way she creates worlds with her songs and albums, the details that go into it, it's all so carefully thought-out. Her live show has costumes and choreography, and her videos are intricate films that add to the whole story. I caught up with Revenge Wife to talk about her new music, the importance of her visuals, and not following trends.

I was listening to your new music. Can you tell me what's changed since your last release?

Revenge Wife: For the new stuff that I'm releasing now, I wrote "Death Wish" in February, and I wrote "Holiday" in June. I feel like there's such a representation of where I'm at sonically right now. I'm really obsessed with like Italian disco from the 80s. I'm really in that vibe and just trying to channel that.

I feel like you're the kind of artist who doesn't chase trends. Do you think it's more beneficial not to be chasing trends? Do you feel like it gives your music more standing power?

Revenge Wife: I think it's like there's this balancing act that has to happen. On the one hand, I am really aware of what's happening musically from a contemporary place. I'm looking at what everyone is doing, and I'm listening to it. And I think when you do that-- it's this way with fashion as well. When you do that, you feel something that is lacking. Because if everybody is kind of on this one page, then you're like, "Oh, there's something I want to hear, but I'm not hearing it yet." And then I just try to make that. I feel like that with fashion. You see everybody's wearing this one thing, and it looks awesome, and you're loving it, and you're like, "Wow, I'm loving that, but there's something that I'm missing." And then if you just do that thing, and then everyone's like, "Oh, my God, that's what I've been missing, too." I feel like there's this collective subconscious that we're all a part of.

It also reminds me of when people tell you it's easy to be fashionable, but it's harder to have your own style. I love that comparison because it does feel like people trend-hop musically when they need to have their own style.

Revenge Wife: I feel like it's not even ever something I think about what my style is or what my sound is. It's just kind of I go through obsessions, and then that's all I want for that period, and then I'm over that, and I move on.

Can you kind of tell me about the process of curating kind of your live show?

Revenge Wife: It's interesting because I'm definitely coming at this from years of performing already. There are all these different aspects to the live show that I think about. The first one I think about is me as a performer and how I can energetically hold the room and hold this space for everybody. That's the first thing I'm working on because I think that's what it is. If you think of a show, it's like this event or a party that we're all going to. Then we just want to be having a good time together. Then, I love the visual aspects of everything too. I'm such a visual person, so I want the show to be visually cool, having dancers and making sure the lights are really cool. And then beyond that, making sure it sounds great.

Can you tell me how you intertwine your visual aspects with the music and how they influence each other?

Revenge Wife: For me, music and visuals go hand in hand. I wouldn't be able to separate them. I really want my whole project to feel like this world that you can step into. So in that world, there's music playing. There are visuals around you. You're also in a space. I really think a lot spatially. There are colors happening and lights, and I want it to be this full world that's happening. I feel like a lot of people are like, "Oh. The music video is obsolete now." We're coming into this new phase where social media and TikTok are changing the way we view music videos. But I just really like telling a story and having that visual accompaniment.

Revenge Wife: I know exactly what you mean because I direct music videos for other people too. There's this shift that's been happening. You don't want to spend too much money on a music video anymore because it's kind of changed, and what is that, and what is the music video now?

I feel like there's also this music thing now where you have to just keep pushing stuff out. And it feels like shorter attention spans, I guess. Do you feel that pressure to kind of keep churning stuff out, or are you more deliberate with what you're putting out?

Revenge Wife: I kind of have just made the decision that I'm just going to do whatever I want to do and not chase anything because I do think as an artist, it's really easy to get caught up in it and be like, "Oh my God. I have to put out this much." I mean, I actually am putting out a lot. But after "Death Wish," I was thinking, like, "Oh, I think I don't want to put out anything for a little while." I want to pull it back and chill on it because it's so much work just to be out there on the spot. I've kind of just been deciding for me, I'm just going to put out music when I want.

How do you deal with feeling competitive in music?

Revenge Wife: I'm not a very competitive person. I feel like I'm so idiosyncratically me, so I don't really feel like I'm in competition with anyone. I love watching other people do things, and I love being inspired by other people. I think that it's happened where I feel like someone's copying me in a way. That used to bother me when I was younger. I would be like, "Oh my God. That person used my idea," and it would really upset me. And now I don't even care about that. I just have gotten to this point because I just am over all of that, the games of it all.

How do you stay motivated just to stay in music?

Revenge Wife: I vacillate between feeling really excited about my work and knowing that that's what I'm supposed to do to being, to being like, "Should I become a nun"? Like one or the other. I think that it's interesting because anytime that I'm really on a downward curve, something will happen that will be like, "Okay, people are happy, or someone's excited, or someone that day wrote me a note that makes me feel better." So that's just how things work, but it's hard. I've been thinking about it a lot lately, like, "Should I do it? Should I continue"? I'm in it right now for the next year, so let's see how it goes.

What would you say is the biggest challenge for you in your music career right now?

Revenge Wife: I think the biggest challenge for me in my music career right now is having patience. Because I worked so hard for so long, I'm working so hard on my project now. I think that having patience has been my current thing. Really just being like, okay, I'll see how it happens and giving myself time.

Do you have any tips for kind of handling that patience? And do you set little goals?

Revenge Wife: I keep myself on a five-year plan with music and everything that I'm doing. I'm really long-term-oriented. I have this album that I'm working on right now, then I have the plan for the album after that that I want to do, and then I have a plan for the album after that. They're different projects, and each one is a different concept. Then I'm writing a film, and so that fits into that five-year plan of making that. So when I'm like, "Okay, I have to be patient." I'm just like, "One day at a time."

I feel like you're thinking the opposite of people who think singles. You think in albums still. Why are you more drawn to albums?

Revenge Wife: For me, it makes sense to think of a collection of songs and then the time and what I'm dealing with. I'm an album person. I'm not planning on releasing my album until late next year. So I have a bunch of singles that I'm going to release. It's like when you have a journal that you've been writing in for a couple of years, and it's your journal that you write in, and then you put it away, and you start a new journal. And then you look back at that journal, you're like, "Oh, for that period of time, I wrote in a different voice than what I write now." It just feels like a collection of a moment in time.

Can you tell me about the concept behind this upcoming album?

Revenge Wife: The concept of this upcoming album, it's about dreams. Each song is like a different dream. "Death Wish" is its own dream. And at the end, there are all the animal sounds. And then "Holiday" is its own dream. I think you can feel it when you play "Holiday." It really feels like you're on an island in the future. It's like nighttime. It has this really visceral feeling.

Do you think of yourself as more of a perfectionist? Do you ever think you are overanalyzing your music? Or do you know when it's right?

Revenge Wife: I think I know when it's right. For the mixing process, I pretty much hear it already. I hear it down in my head. And so I just want to get it to that point. And then, once it gets to that point, it's good. I don't need to keep going if that makes sense.

Keep up with Revenge Wife on Instagram and Spotify.