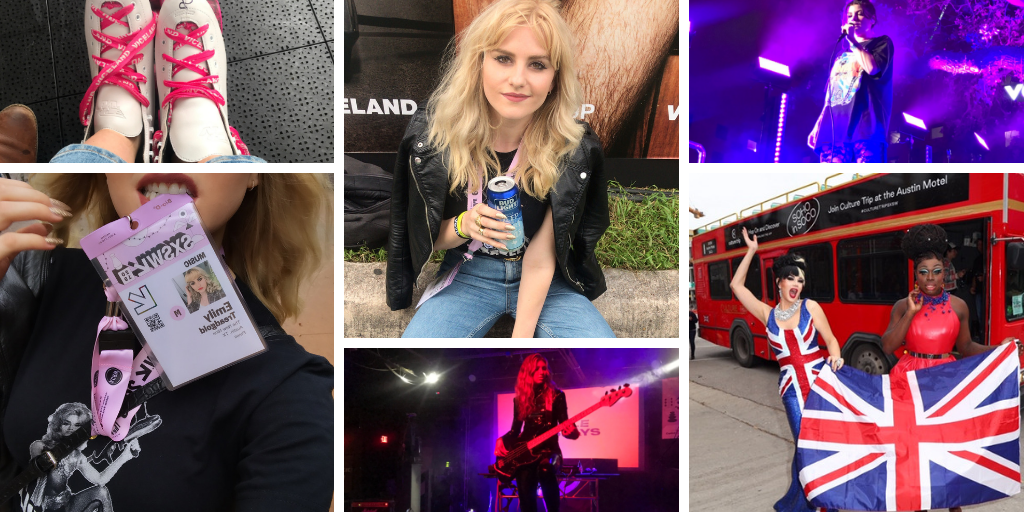 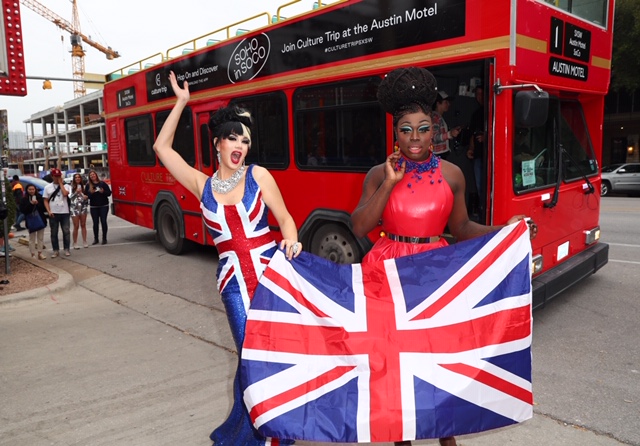 Okay, let’s be honest the time before Tuesday is just time for me to go to parties and feel important before I go back to feeling like human trash. Monday I just went to the Soco x Soho Culture Trip party which was Drag Bingo. We met Manila and Bob The Drag Queen and lost at bingo. Whatever, you can’t have everything. We then bolted over to Vevo house to catch SHAED.

We pretty much called it that SHAED was going to be a big deal when we  first heard their song “Perfume” now with “Trampoline” on an Apple commercial they’ve pretty much engrained themselves into our lives and that’s definitely not a complaint. Chelsea has such  powerhouse voice and their songs are so ethereal that they deserve all the new recognition.

I’m eating a large breakfast before Tuesday. I had some tight schedule updates today and I really don’t want to miss anyone and my dad texted me that there is a high chance of storms. On deck tonight: Bulow, Lauren Sanderson, Cat Jaguar, Blu DeTiger, and Donna Missal.

After I knock out some interviews I go to Viceland. They have free drinks and cotton candy and a skate rink. Rollerskating is more difficult than I remember so I do my ~party trick~ which is just the split so I can get a nice Instagram moment. We stand in line to see Blu DeTiger, the bassist from Kitten that started an insanely cool solo project.

Next we go over to Sellers to see Cat Jaguar. They're one of my favorite local bands and if you aren't trying to see local Austin acts while you're here then you're doing it wrong. With lyrics like, "I hope you die of the sickest cancer for all the times you didn’t answer," they're easily one of the standouts.

We jumped back over to Vevo house to catch bulow and stayed for my queen Donna Missal. An oncoming storm made her songs "Transformer" especially dramatic and her closer "Keep Lying" was on of our highlights so far. She plowed down the stairs screaming into the audience shaking her head and shaking the crowd with her powerful voice.

My Wednesday is weird. I truly wanted to try to attend some panels but it’s turning out that I just want to go to shows. I wish I could do it all. I went to Black Fret to do some local thangs and see Quiet Company bc again I’m a supportive local bitch. At one point Taylor says, “I don’t like any band enough to sit in the sun” and he has a point  and I’m anxious about mosquitoes right now but the screwdriver I'm having for breakfast quelms this for a minute.

After this I’m scooting back to the convention center to see “Country Music’s Struggle to Define Women” until 4 so I can do this thing called ~learning~ which I should do.

I cut out early and go to see Kensington Moore at Icehauers and she's so precious and I get in my feelings. Next I go back to learn and watch a seminar about the value of K-Pop it's actually nuts and I'm a huge K-pop fan. Basically they make these groups that cater to different cultures and that's why they're all so popular. One group can have a different video and even be split up to be in Mandarin, English, and Korean. What can our pop groups do right?

I take a Bird back home to drink Zipfizz and eat roasted veggies.  I scoot away to the Neon Gold showcase where I'll probably end up all night. I arrive at Empire to meet sweet Jenna Million and y'all I am TIRED. It all hits me pretty quick. We watch Easy Life and Robinson and oh hey we run into our fav Blu DeTiger watching bands. That's the cool part of SX you just see everyone hanging out watching shows.

I saw Charlotte OC and was BLOWN AWAY. OMG the girl has some FEELINGS and wow that voice. I'm obsessed. We catch Donna Missal yet again then head in for Your Smith. What did I say about this lineup y'all? WAFIA slays and morgxn is always my favorite and I'm so proud of him. I grab Snap Peas from the gas station and head home, exhausted but glad I stuck it out.

Good morning myself! Let's wakeup at 7 to transcribe some interviews!!! Then I went and met with some of my email friends and took care of some new interviews. I almost fell asleep on a couch. I went to the Women in Music meetup for ten minutes of networking and try to get some connections. I wish I could've stayed longer but I have another interview soon.

I go see my friend Kayleigh Hughes interview the iconic Laura Jane Grace and I almost cried. They talked about the punk scene and trans rights and it was beautiful. I'm also just beyond proud of Kayleigh and I can't believe she's my friend because she's so cool.

One more interview!!! Then I have a little break so I hang at Australian House. They have coffee and grilled cheese which is like a weird combo but okay Australia.

I catch Chloe Lilac at Swan Dive and it's weird to see such gorgeous and emotional music at a place known for tequila shots and dancing. She is just so precious.

I head to WFNM where I'll finish my interviews and watch the full showcase. I saw Greyson Chance who is all grown up and making some gorg indie pop now. Robinson always kills it. Yoshi Flower had some rockstar attitude climbing on speakers and licking his guitar. Donna was Donna, queen of my heart. I almost had to go home because during an interview a roach was behind me and the band (Easy Life) discreetly moved me so that it wouldn't jump on me which would've resulted in me crying like a maniac. I ended the night with Ella Vos who I swear is an actual angel. I got pizza and ubered home and y'all my legs! My legs hurt so bad. I slept like a rock.

Started my day at the British Music Embassy which is great for standing behind tall people and eating a buffet of green beans and potatoes. I'm watching Minke in such a huge crowd of people and her gorgeous, emotional songs.

During my interview with her after the show, a weird homeless guy harassed us and I had to get security but hey that's sxsw.

I spend the rest of the day chilling at Native and watching bands. In my sad-girl vibe I saw Taylor Janzen at the Rolling Stone party and almost cried.

I finished my nigh at the Haus of Venus party where I shopped vintage clothes and watched Cat Jaguar again.

My god it's almost over. Saturday I started with Leah Cappelle and bloody marys because it's sad girl Saturday. Then I head to Native to check out the skatepark and watch Magna Carda. I stay there for a hot minute taking Beyonce selfies.

I try to see CHAI at Volstead but the line deters me so I travel back downtown to eat some Juiceland and catch Love You Later.

Mohawk is my last stop. I watch FLAVIA and Devmo and they are both so talented. It was the perfect closer to my SXSW. Two amazing women challenging gender roles in their genres. A perfect ending to another crazy week.