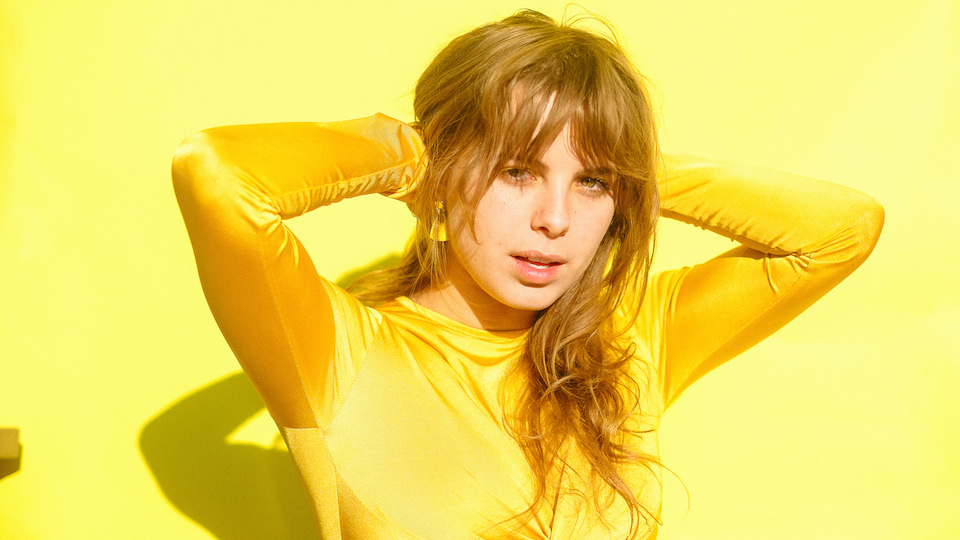 Taylor Noelle's voice is just like crystal, clear and sparkling, the way she hits each word just sounds perfect. Her new song "Rely" is that kind of shimmering pop that we can't get enough of, complete with strategic hand claps, a dreamy melody, and a sneaky sad meaning behind it. We talked to Taylor about her gorgeous new song and the challenges she's been facing lately.

Taylor: I’ve been singing for as long as I can remember. I sang along with absolutely everything, even as a little toddler. By the time I was in elementary school, my dad taught me how to play piano. He put little stickers on the keys to label their notes and showed me how to build chords with those notes. So I started learning to play songs I loved and slowly started writing my own.

I wrote my first song at age 10 or so, but really started writing music I considered mine around 16 or 17. Around then, I also learned ukulele which eventually helped me to pick up a bit of guitar as well. Growing up, my parents mostly only exposed me to music from when they were young: Diana Ross, the Beatles, Fleetwood Mac, Whitney Houston, the Beach Boys, and so on. I really didn’t listen to much modern pop music until I was a teenager, which I think has shaped my personal taste quite a lot.

I think it’s been a bit of a journey for me to land in the musical place I am now. Just having all of the tools I needed to sing and song-write and perform didn’t necessarily make me into a compelling artist. Something I struggled with for a long time was finding confidence and passion in what I was creating. Even when I put good technical work into some things, I felt at a loss as to why it didn’t feel like “me.” When I started making some very intentional choices in my songwriting and production and performing to foster and create an energy that felt special and uniquely mine, I felt such a huge change in the pride I felt in my work and my excitement to share it with others.

Tell me about the song “Rely” what’s the story behind it?

Taylor: “Rely” is a song I wrote alone at a piano, just absolutely overcome with emotion and needing a way to process it. It was about the breakdown of an important friendship in my life and my feelings of loss over it. So I sat down at the piano and just poured my heart out. I had been reading Carole King’s autobiography A Natural Woman around that time and listening to a lot of her album Tapestry so I was in a real ‘70s singer-songwriter kind of mentality. Even as I first wrote it as a slow ballad, I knew I wanted to have a good rhythm to it, to live in the same sad upbeat world as King’s “It’s Too Late” and other songs like HAIM’s “You Never Knew” and Rex Orange County’s “Loving is Easy”.

I brought the song to my band members Wes Rodberg & Boone Wallace to build out a demo for the song. My bass player Connor Ehman came in after a couple sessions and laid down the fire bassline that’s on the track. And then I played it at house shows and other gigs around Nashville for about a year before I decided to get the song all the way to the finish line. I brought it to Ghosthood, an awesome producer in Nashville I had written with before to oversee the final production. I had my full band of Wes, Boone, Connor, and my keys player Cass Gephart all track on it to really give it some musical and sonic depth. I joke that we’re like Fleetwood Mac minus the romantic entanglements and cocaine.

What was the inspiration for the music video?

Taylor: I wanted the video to tell a story, but I didn’t want it to be too much of an obvious narrative. I mostly wanted to carry the emotions and energy and feeling of what inspired the song. There’s sadness and grief as well as anger and passion. I also felt like there was a lot of transformation going on in the song, as you try to figure out life without this person. Something that had stirred inside me was when I got a haircut over this past summer and got bangs for the first time since I was pretty young. I felt like a new person.

So I approached my director Joey Brodnax with all of these ideas and feelings and we shaped together the concept for the video. We had worked together before for a video for my song “End of the Night”, so I knew he would take whatever loose ideas I had to another wild level. And that he did! I love the way that color tells a story in the video. I love the transformations that happen -- the haircut, the painting, the projections on the face. I love how it all ties into each other in subtle ways. It really encapsulates all the emotion I wanted it to.

What has been the biggest challenge for you in the music industry?
Taylor: I think one of the most challenging things about working in any kind of creative field is being able to freely pour yourself and your emotions into your art while also being able to manage and control your feelings on the business end of things. Especially while being independent and being your own manager, publisher, agent, and so on, you have to be able to sell yourself and your art while also protecting yourself from feeling the highs and lows of that too much. It can be an emotional pendulum. So while there are all sorts of challenges I face every day in the industry, that is the one I work to guard myself against the most. I have to remind myself to be nice to myself.

What has been the highlight of your career?

Taylor:  What a question! I’m not exactly sure how to answer. Right now honestly feels like such a constant grind and a constant hustle. It’s definitely a thrill every time I have a song come out. It’s a thrill to see people I know and people I don’t know connect to the songs I put out. I have so much fun with my band rehearsing and performing. I hope that I can look back on this time in a few years and just see it all as one run-on highlight. And be proud of my work ethic and my persistence.

Taylor: Like I said, really just to be kind to yourself. Take care of yourself. Respect yourself. Love yourself. Your dreams have value and importance to the universe.