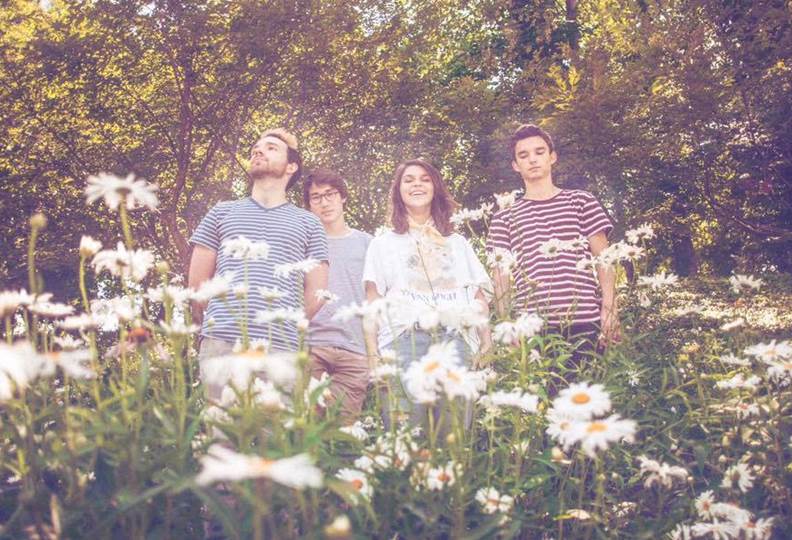 Addie tells me that opening for these huge acts gives her so much inspiration. She says, “It’s so cool to get to know other bands. It makes us want to work really hard so that we can be in their shoes and treat an opening band the way they did. I look up to Mandy so much for her kindness and the way she performs is unreal so it’s cool to pick up on things when you go on tour.”

Addie’s been doing music since the she was really young. She recorded her own music by herself and released it when she was a sophomore in high school. That’s when she realized it would be more fun to start a band than continue solo.

She explains, “I realized playing music by myself was more of lonely thing. I met Brandon our guitar player through our parents we started doing open mic nights. We’d do covers and we wrote a couple songs together. When I wanted to make a band he was the person I called. He got Austin our drummer and Pierce our bassist.”

After the band was formed things started taking off. Addie had always imagined herself going to Belmont to study music business, but she really only wanted to do it so she could meet people, when the band started seeing success she realized she wouldn’t have to do that, everyone she needed to meet was already in her band or in Kansas City.

She says, “I always knew it was going to happen even if I didn’t know how. I’m a big believer in talking confident and making it happen. We’re really lucky with how everything worked out. The music scene around Kansas city and everyone’s sport has been really helpful. We just wanted to play music together. We recorded a 5 song EP. We worked with this girl Peyton to record us and she’s now our tour manager and day-to-day manager and she’s one of my best friends she sent it to the radio host in Kansas City, Lazlo and he’s our other manager and he liked it and played it on his Friday segment for New Music and it got a reply positive response. We almost got launched into it before realizing what happened.”

Their song “Hands Down” pulled a lot of traction online and even to this day is blowing up on Spotify. The inspiration behind it comes from her and her friend going out and doing “street sessions” which were acoustic performances in random places. They were inspired by Tyler Joseph’s videos from twentyonepilots.

She says, “At that time in my life, I was looking for inspiration in love and I grew up watching a lot of divorce and different marriages. I’ve been obsessed with love in the way that I want to understand it and from that exploration came that song.”

Their new music has really shown their growth as a band. They went from recording in a basement to recording at Capitol Studios where so many legends are made. You can see their influences coming through more clearly in each song and sense their maturity.

Addie explains, “We felt a lot of good pressure of being somewhere where so many important people are. We were recording and I was doing vocals, it might have been Naive, and I was angry because I kept messing up, and I’m very go go go and I can’t eat until i’m done with my vocals. I took a break and walked around and I had my head down and I bumped into someone. I looked up and it was Niall Horan! He looked so caught off guard. I think it s funny story because that’s so different when you record in your basement because you would just run into your mom. I think that shows growth.”

She’s so right. Let me note that this is a band comprised of teenagers still and look how far they’ve gotten. They’re still at the beginning of their career and they already have had so much success.

Her best advice for that girl who’s questioning starting a band.  She says “Do it, make the band. Find musicians. Play as many shows as you possibly can because getting your music out there is so important. A lot of new artists are too scared to release their songs  because they think it’s not good enough, but it’s never going to be good enough. You’re always going to be critical of yourself, so just do it.  Any song you release can end up being someone’s favorite song.”

I asked who Addie would absolutely freak out to meet. “The Killers” she says instantly, “I’m obsessed.” She told me about how one time they played a show with Death Cab For Cutie and she rehearsed in her head everything she was going to say to Ben Gibbard but when she saw him in catering she couldn’t say anything.  “I hope I get another chance someday,” she says, and I’m certain she will.

Go watch them open for Andrew McMahon on Sunday in Dallas! Follow them on tour, on Twitter, and on Spotify for new releases.