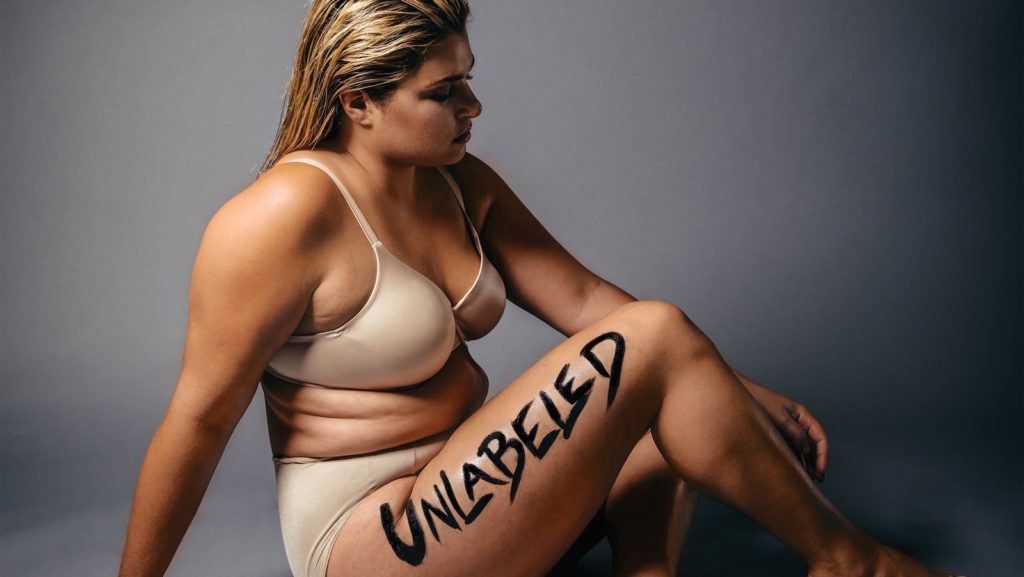 Isabelle is an up-and-comer pushing her way to the front of the crowd. At the end of September she released a music video for her single “Unlabeled”, a body-positive anthem that praises acceptance of all backgrounds and extols the virtues of inner beauty. It’s a song that I wish had come out when I hit puberty. Perhaps then I would have felt more in tune with my plus-size figure and avoided the toxic yo-yo dieting where eating a bag of unsalted popcorn counted as a meal.

Both the song and video for her single speak to those of us who break the mold. Having extra weight still carries a taboo, and only rarely have I seen a body that looks like mine on screen unless it was used for a laugh. In her music video, Isabelle is in the middle of a photoshoot while makeup artists and designers pull at her skin, lace her up in a corset and try to cover as much as possible. Triumphantly she waves them away and casts off the layers one by one, looking stunning in every shot.

Visuals aside, “Unlabeled” is more than just a feel-good song, just as Isabelle is more than an impressive vocalist. She studied at Berklee College of Music in Boston which boasts famous alumni like John Mayer, Diana Krall and St. Vincent. Her training definitely shows when she belts, as there’s a palpable power from her voice that ripples under your skin.

It was during college that she auditioned for American Idol, and though she is grateful for the experience her memories aren’t fond.She says, “In American Idol you have no control over what can happen… The show is a product, and you’re a product.”

The rejection of being pigeonholed has led Isabelle to write her own music without a major record label behind her. She’s taking charge of her own image and brand. She says, “The good thing now is that I have total control. I didn’t feel like I would be able to express things the way that I want to express them… There’s pros and cons to having a label, right? You have a label, you have a huge machine behind you. You have the PR, you have the A&R, you have the money. THE MONEY is a huge thing. But you do give up things when you choose to go to a label and they own so much of you.”

She plans on releasing single music videos to build herself up before officially dropping an album. She explains, “As the industry is changing I think that we’re in a ‘single’ time. So I’ll be releasing my next single in November, and another video for that song. We already have a bunch of songs ready to go mixed and mastered. Now it’s feeling out when is a good time to put them out, making sure that the quality is good and what I’m saying is meaningful.”

“Distance”, the first song she wrote after moving out to Los Angeles, is set to release next month. Isabelle describes it as “Rock, Kelly Clarkson, mid-tempo.” The ballad encapsulates the pain and frustration of being in a long distance relationship. It was based around her struggles living apart from her boyfriend for three years. Happily, he moved out to the West Coast and they’re still together.

Performing at Amber Rose’s SlutWalk earlier this month was a major stepping stone for Isabelle and her career. It began as a protest that raises awareness for gender inequality and rape culture. It’s a joyous trans-national movement to inform others that no matter what anyone is wearing or their background they do not deserve to be sexually assaulted. Typically participants dress in revealing clothing, carry signs, march, and host panels of women who speak about their experience as rape survivors. For many, it can be a surprising sight to see thousands of women claiming ownership of their own bodies when everything else in society says that it belongs to others.

Amber Rose incorporated a festival aspect three years ago to highlight artists whose message aligns with the core of the original protests. For Isabelle, being asked to perform was a thrill and an honor. “Amber Rose was amazing. Her and her team said ‘we have to have you perform’. When big names are behind you with huge followings it makes it tough, but she was so supportive…For me the SlutWalk was a great opportunity to join forces with my message. SlutWalk has to do with unlabeling people and of course the rape culture that’s been going on is insane. Women that are labeled as sluts because they show their stomach or they’re wearing short shorts…The day was about being what you want to be.”

Still, despite everything we discussed Isabelle was a little hesitant about the subject of feminism. “I’m a human supporter as far as the word goes because I think that I’m a feminist… but putting a blanket over that term is tough because there’s a lot of men who are insecure. ‘Unlabled’ is for everyone. When you put that label, ‘Oh I’m only a feminist, oh I’m only about women!..’ I’m not being inclusive to everybody.”

It’s a fair comment that gets brought up often within feminist circles. The intersectionality of gender, race, and class and how they contribute to different levels of oppression is a complex and dynamic conversation. Often feminism gets misconstrued with being ‘man-hating’ or that women should be superior, when in fact it is about equality of all people. More recently accepting the label has come into vogue with celebrities, artists and political figures but there has been a simultaneous push back by the industry. Several people fear being ostracized and cutting off large parts of their audience if they become vocal about causes they support.

Isabelle is doing great work. She’s taken charge of her career, spoken out for self-love, and is writing her own story. Her music is accessible and powerful for everyone who needs a battle cry when they don’t feel worthy. I’m looking forward to following Isabelle through her career and supporting her journey. Labels can be used to tear others down with a single word, but they can be also be an empowering tool. The ones we choose for ourselves are often a major force to keep us going when nothing else seems to hold us up. I hope that one day Isabelle chooses to embrace just one particular label, but that’s entirely up to her.