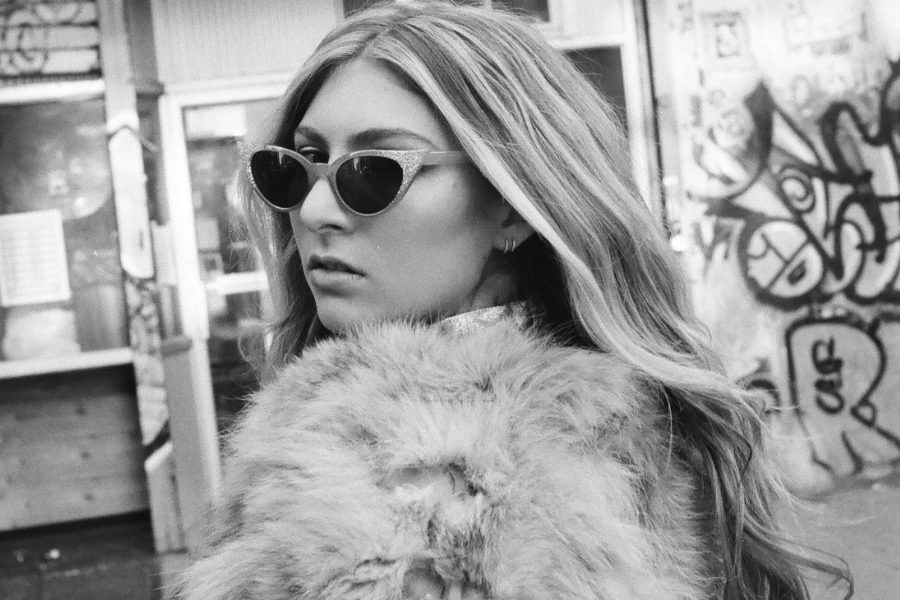 I was first introduced to Blu DeTiger as the bassist for one of my favorite bands, Kitten. Blu is an incredible musician and when I found out she was embarking on a solo project, I lost it. Her new song "In My Head" is a shimmering euro-disco bop that you'll want to put on loop. She's opening for The Knocks on their current tour and also playing multiple instruments for their set. Is there anything Blu can't do?

First things first, how did you get started in music?

Blu: I started playing bass when I was 7 years old. My older brother was playing drums at the time. I wanted to play an instrument too. I don’t know how much I really thought about it at age 7, but I remember thinking that everyone already plays guitar and that it was “too mainstream,” so I chose bass. I come from a creative household and was raised to always follow my passions. I fell in love with the instrument and with performing, so everything unfolded from there.

What made you want to start a solo project?

Blu: I’ve been playing bass with different artists, bands, and projects for my whole musical life and I love it.  When I started DJing at 17, it opened me up to a different musical world, culture, and mindset. I also put my own spin on my DJ sets in that I always play live bass with my sets.  It was empowering to move a crowd by myself. I love playing with other artists and I love DJing, but now I really feel that I have something to say, and I know how I want to say it.  I’m combining my influences and experiences and making the music I want to make.

I know Chloe (from Kitten) is super supportive, tell me about y’alls friendship? Why is it important to have women supportive women, especially in the music industry?

Blu: Chloe is one of my best friends, and it’s been so much fun playing with her in Kitten! She’s an amazing performer.  I’ve learned so much from her. It’s so so important to have women supporting women in the music industry. Sometimes I feel like there’s this underlying sense of female competition because since there’s fewer opportunities for women in most jobs in the industry, we feel like there’s not enough spots of success to go around or something… it’s a weird place to be but we just have to change the narrative and make it so that there’s equal room and opportunity for everyone. Someone else’s success doesn’t mean the failure of another’s. It’s not that the “spots” fill up, it’s that we’re creating more opportunities.  I’m really grateful to know such talented and powerful female musicians and luckily I have developed great relationships with them.

Tell me about “In My Head” what’s the story behind the song?

Blu: “In My Head” is my debut single and I’m so excited it’s out in the world!! I’m always running around New York doing a million things at the same time and I always get made fun of for never being able to sit still at the studio haha. I think I’m naturally like that because the music is always there. The song is about that feeling I get when I have an idea or feel really passionate about something I’m working on and I need to just get it out—record it, dance to it, etc. To me, “the beat that’s in my head” means the music is always flowing. I also wanted to make a song that all my DJ friends could spin in their sets, and this is supposed to be that fun song to let loose to and dance.

I love the aesthetic of the video, what was the inspiration?

Blu: I was sitting around brainstorming with Ben Ruttner (1/2 of the Knocks, who directed the music video) and we wanted it to pop off the screen and be fun, like the song. The Bratz dolls were advertised so much when I was kid and really a staple of kid and tween pop culture. They’re all dressed like me in custom matching latex dresses meant to be like little Blu Bratz dolls. The set design is like a mini bottle service club. It was such a fun video to shoot and I’m super happy with how it turned out.

What are you doing to prep for your upcoming tour?

Blu: Before a tour, I practice a lot. I’m the opener as well as the bassist in The Knocks for this tour, so I have to prepare for two sets.  For my set I’m DJing, performing my own songs, and playing bass. For The Knocks I’m playing bass, synth bass, guitar, and singing backups. I want to feel as comfortable as I can with the musical parts so I can focus on the performance aspect and just having fun on stage. We did over a week of 10-hour full band rehearsals in Nashville before the first show of the tour in Vancouver. I also get my show clothes together which is really fun, but packing light and systematically is really important. Being an organized packer and having a good system for living on a tour bus saves a lot of time and stress. I’m still getting my routine down but I feel like I’m getting the hang of it the more I tour.

Blu: Don’t ever feel like you don’t belong somewhere just because you’re a girl. Practice your ass off and be yourself.