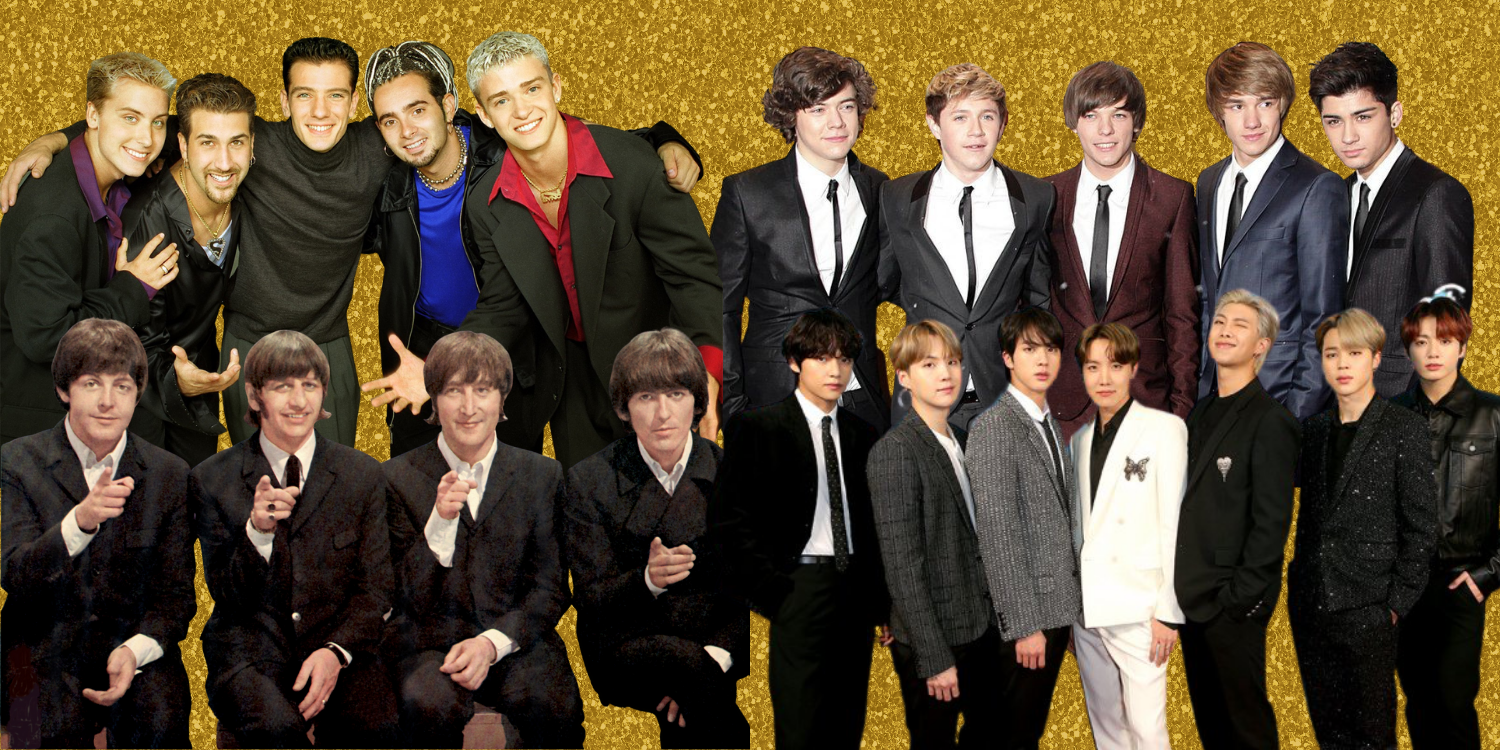 When you think of boy bands, what comes to mind? One Direction? NSYNC? The Backstreet Boys? I recently posted a Tik Tok saying all bands with boys are boy bands, and people got very, VERY upset, mostly because I grouped in 5SOS (along with The Beatles, The Rolling Stones, and Led Zeppelin). According to comments, they can't be a "boy band" because they play instruments. But what about The Jonas Brothers? Arguably one of the defining boybands of the 2010s? Or The Vamps who never rose to the same level but still were considered an instrument-playing boy band?

A quick and easy Google search defines "boy band" as "loosely defined" but as "a vocal group consisting of young male singers, usually in their teenage years or in their twenties at the time of formation, singing love songs marketed towards young women."

When we take that context, we can easily group a breadth of genres and acts as a boyband, from The Beatles to the Jackson 5 to Menudo to One Direction. What stands out to me is that last sentence, "marketed towards young women." It seems like when we use the term boyband; we're met with this feeling of condescension like they're not a real band because of who they're marketed to.

The New Statesman's Paul Johnson once said at the height of Beatlemania, "First, teens had taken control over pop culture, beginning in the 1960s and with the Beatles as they would forever after, Second boy band fans, specifically those who are women, were disparaged for their gusto, as they would be forever after."

Even though we associate "boy bands" with the late '90s, 2000's MTV era, we can trace this back to the early Doo-wop groups of the '40s and 50s who sang about love and were generally considered pop music. When we get into the '60s, we see what most historians consider one of the first true boy bands, The Beatles. The group started in underground Berlin clubs but was transformed to be marketed to young women, aka fangirls, with their uniform aesthetics and pop songs about love. We also saw the rise of The Monkees, which were negatively received as being too branded, too obvious (Much like Big Time Rush in 2009).

Andrew Unterberger with Billboard even wrote, "I still believe the most important qualification for a boy band is in the way they're received by their general fanbase, and the Beatles essentially set the template (and the bar) there for audience screaming, for favorite-member debating, and for -mania suffixing. And of course, their early songs are about as pop as pop (or at least rock) gets."

This would be the DEFINING boy band era, the decade where the term was inescapable, and battle lines were drawn. After New Kids On The Block set the bar for modern boybands in the 1980s to the undeniable impact of Hanson, the 1990s would be the height of boybandom. With acts like NSYNC, The Backstreet Boys, LFO, and 98 degrees, etc. dominating the charts, the term became a staple, and the stigma was set. With The Jonas Brothers setting a new standard for a more band-oriented boy band, it was easy to see the transition happen.

With One Direction, 5SOS, and the rise of K-Pop quickly rising to chart-domination, the term boyband feels almost archaic. Almost ALL current pop and rock involves multiple writers in each song, and everyone has vast vast marketing teams, but the term still remains a point of contention.

Maria Sherman, boy band expert and author of Larger Than Life: A History of Boy Bands from NKOTB to BTS, writes that "In truth, "boy band" means many different things to many different people; it's a living term that mutates with each passing generation, popular genre, socio-economic shift, and, well, person talking about it."

With the rise of K-Pop acts on the US charts, it's hard to dispute the talent, and the ability of these acts but of course, taking young women's views on music seriously is always an uphill climb. Gene Simmons of KISS recently told Consequence that BTS would never be able to be like The Beatles, and when their fans "grow a little bit older, that's going to go away." Discrediting young women for their initial love of The Beatles and any further discovery they make.

Why can't the next boy band be the next Beatles? The only thing we have to prove is the growth of the boyband and the time for music and society to test what their music contributed. With acts like CNCO, Why Don't We, and BROCKHAMPTON, holding up the term in current times, it's clear it's not going away and will only grow with time.

5SOS has said in multiple interviews that they don't like being called a boy band, but that's not new. The Backstreet Boys and others have all cited a dislike for the term. 5SOS also, at one point, said, "We don't want to just be, like, for girls. We want to be for everyone," in a Rolling Stone interview that haunts me daily. I believe in growth, and I know they've changed that sentiment, but it feels like a large number of acts, and their fans have to face some internalized misogyny with that initial reaction to a pretty basic term used to describe pretty essential groups.

Clearly, history has proven that boy bands have given us some of the most essential music in history. Even if you look at the more typical boy bands like One Direction and NSYNC, you can't deny their cultural impact. I don't think the term boy band is an insult. I think it's about a group that could either fade into obscurity or change the course of music, just like any other act. What needs to change is how we see the term as a way to demean the fans who love them.