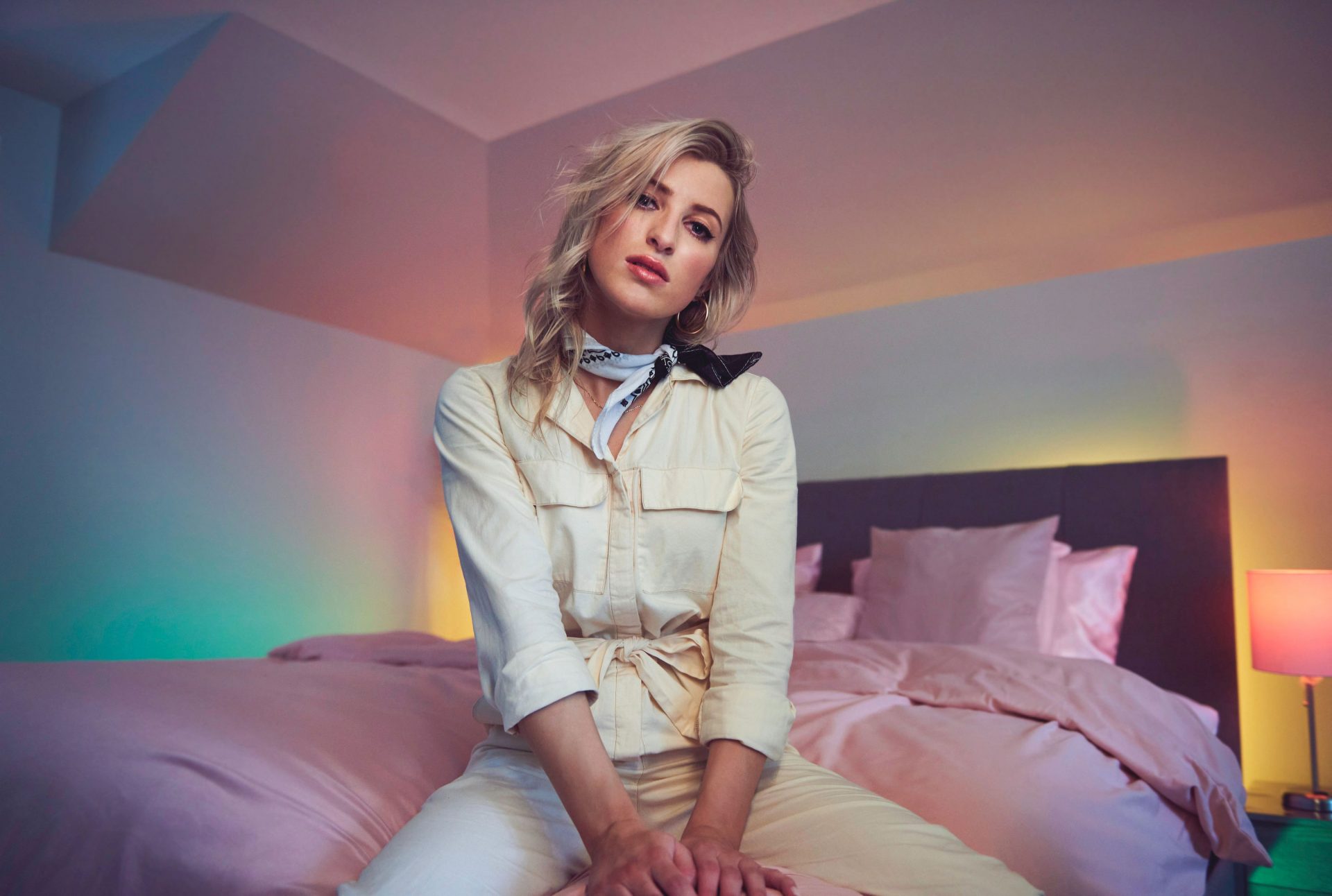 Cassie Dasilva has been stuck in Canada working on her music, Canada she's still been in lockdown, and it's been a struggle. Still, she's found solace in creating gorgeous, aesthetically pleasing pastel-coated videos and the angsty breakup songs we all need. We talked to her about her new song, her stunning videos, and how it feels to put such personal songs out into the world.

Did you grow up in Canada?

Cassie: Yes, I grew up north of Toronto, and that's where I am again now. I grew up in Ontario, I was in BC for a bit on the West Coast, and then I moved back.

And how did you get started in music?

Cassie: Well, that's kind of a long thing. I started piano at six, and I was kind of shy, so I didn't start singing until later on. I wrote lots of poetry in grade school, then in high school started doing coffee houses and open mics, and I was playing my own songs for the first time. I was doing folk music at first. After high school, I went to recording school and started doing things more legit after that.

I want to talk about your song someone sent me on Tik Tok, "Unsolicited Contact" how did that feel to watch it blow up. did you feel validate

Cassie: It's the first thing I'm doing on my own, and I was signed before, and it didn't end up well. It was a feeling of validation, that people outside my friends and family, people from all over the world messaging me. On Instagram and stuff, it reaches people who have somewhat of a connection. On Tik Tok, it's perfect strangers finding this, stopping, listening, taking the time to reach out or save the song. It's cool to see that happen.

And tell me about "I Don't Trust Anyone Anymore."

Cassie: It's about being at the end of the relationship where you're not only questing the entire relationship but also your judgment. It's like a "how did I get here" feeling. For most of my teen life, I was the friend who never had a boyfriend, and I got really good at being on my own. Then I had my first real relationship, and obviously, it ended. I was in a place where I'd never let myself feel that way before. It felt like not only brokenheartedly the relationship but by who I was at the end of it. It's about questioning your judgment and what you thought you had.

I love the visuals and the aesthetics that you create. I'm impressed knowing you're in Canada doing this in severe lockdown.

Cassie: It's been interesting to do it, I made videos when I was signed, but I felt like I didn't have as much of a hand in the process. These videos and this music it's all some because I conceptualized everything, and there was no one else to ask for advice. It was just like, "okay, I guess I need to do this, and this is how the video is going to go, and this is what it's going to look like, and this is what everyone's going to wear." No one to lean on, so there's no way for it to go besides really authentically me. It's been cool and stressful in the pandemic and definitely a test of my perseverance to get creative. Stores are closed, so I can't shop for clothes or props, we had to be creative, but it worked out.

Where does the inspiration come from for those I feel like it's so cohesive?

Cassie: Well, I've had a long time to figure out what I like and what I don't like. I like pastels and mixing heavier sounds and quirkier things, and you can get away with it when it's a little bit of sweet and salty. I like clean visuals and mixing those with messiness and sing things that are maybe surprising and being really honest. I think that I've tried really hard to be honest with all of this. I think that shows. It's been an experience having people be like, "I know exactly who you're talking about."

Has it been weird having such personal songs go out to everyone?

Cassie: When I was writing them, I thought about its like, "they'll hear, and they'll know," but then it was like, "okay, the songs coming out in a week. OH MY GOD, THEY'RE GONNA KNOW" everyone's going to know. It doesn't become a reality until there's no turning back. But, to the point of being honest, there's nothing I've said that's wrong; it all happened.

That's fair! What has been one of the biggest challenges for you in music?

Cassie: There's a lot! It's tough to keep a good head on your shoulders, and I think perseverance is one. I've probably said so many times, "that's it, I'm done," something can go well, or a bunch of things can go well, and one thing goes wrong, and one thing doesn't resonate with people, and you question everything. I think the most difficult thing to do is to keep at it, especially during this last year. It's been tough for creatives, and people used to connecting with audiences and playing live. I think these videos have been a good outlet, this video is my favorite thing I've done, and I think it's been a saving grace.

I feel like every time I talk to someone this past year, it's like you have so much time, but you don't have the will to do anything. Just doing the basics of my job was so tough. It was so hard to stay motivated.

Cassie: That's been hard, and I've been seeing a lot of things like, "if you did nothing, it's fine."

I get energy off of going to concerts because that's the community and being on your own is such a bummer.

Cassie: It's hard because I'll see people doing so much, and I'm like, "that's fine." You can only do what you can handle, and I've been handling a lot by myself. Everyone's at their own pace, and everyone has their own journey. This comparison game that we all subconsciously play, and seeing where other people are at and wanting to be there. Sometimes we don't celebrate our own accomplishments because someone is doing better. There is always going to be someone doing better, and I need to celebrate my little victories. I need to stay positive and be my own biggest fan.

I feel like it's the best and worst time to be a musician, it's so easy to do things yourself, but then everyone else is doing it.

Cassie: What I've been trying to do is just forge my own path. It easy to fall into "oh, they're doing this" and "this is what's in right now," but that's not going to work for me. I'm trying to tell myself that that's their path and not mine. I try to be supportive of artists and not threatened by them, enjoy their success because it's success for you if other people are doing well. It's a balancing game.

I saw a doc on Linda Ronstadt, and Emmy Lou Harris said, "wow, she's doing very similar things to me, so I can either be her enemy or her best friend."

Cassie: I love her! It's true, I think with women, there's always os few at the table, and we're just taught to compare ourselves to each other, and it's so toxic. It's not beneficial to anyone, I found such an amazing community of other female artists, and we just lift each other up. We know how hard it is and how much goes into it; to be threatened or not happy for their success is such a waste of energy. It's so much better to be supportive of each other. Having that community is so helpful. Just trying to fight against that way we've been taught to be towards each other.

Cassie: In any industry, women think there's one seat at the table, so I need it, and that means none of these other women can do well, but it's like, let's pull up more chairs and bring everyone to the table. I'm really focused on working with lots of women int hat's probably been the best part of making this.

Women really understand where you're coming from so much.

Cassie: I feel like I hadn't had my point of view reflected in the people I was working with creatively before, and we don't realize how much value that adds. Especially when you're coming from such a personal space, I've worked with all-female producers, and my crews have been 100% all-female or all-female and non-binary. My boyfriend from a video had to be in one of the scenes, and he stayed for most of the shoot, and he was like, "I feel like I'm not supposed to be there," he's like, "I knew it was all-female, but It's so crazy, it's the coolest thing I've ever seen." It's so relaxed and supportive, especially in a place where you're so vulnerable. Videos for me are so vulnerable. I feel so self-conscious. When I was signed and being on these sets with a million people and a lot of men, it just felt uncomfortable. I didn't want to feel like that again.

Do you feel better about what you're doing now? I feel like with so many people, their goal is to be signed.

Cassie: I think it takes doing it to realize that. It is a weird validation, and people look t you differently when you are. I get both sides of it, I just know for me it felt really restrictive at times, and for someone creative, it was like the kiss of death. I had a lot of creative freedom, but it felt like I was always waiting on something or someone or had to bend a lot, and that wouldn't be returned. I was too to pick my battles a lot, and everything is a creative battle for me. It's been nice not to worry about anyone's opinion but my own. I want people to like it, but I don't want to worry about it from a commercial standpoint. When you're trying to play it safe and make it marketable, it ends up being so meh, so bland and vanilla. No One's going to love it; I want to make things people love or hate. I want people to feel things. Also, owning your shit is really important. I don't think people realize how much you give away. You need to own your masters. The fact that the old model is still being pushed today, I hope people realize it's not the best scenario.

Cassie: Just be yourself, whoever that is. I know people say that flippantly because people are like, "who is that" we'll take the time to figure it out! Find out what you like and what you don't like and don't apologize for it, take up space, work and surround yourself with people who like and support that person.