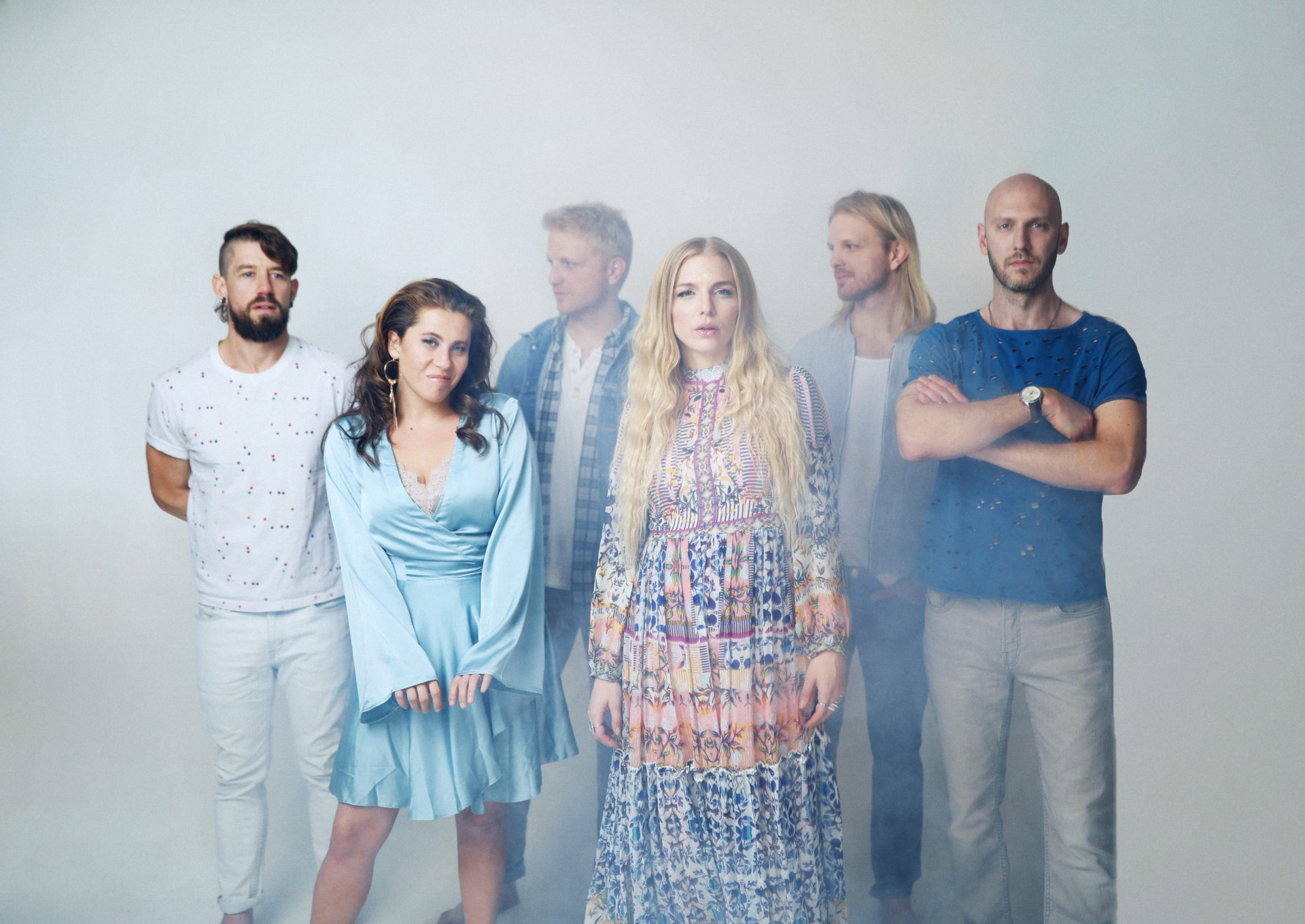 Less than one year after the Kickstarter campaign that swept the nation, Delta Rae is back in full force with The Light, their first independent album. The band graciously invited me to their Nashville listening experience where they brought the album’s aesthetic to life with dreamy visuals, themed cocktails, and tarot card readings from Brittany Hölljes, the group’s self proclaimed spiritual guru. From that very first listen, the album rang so victorious to me. You can hear the band’s celebration of the long journey they’ve finally completed, from getting free from their recording contract to finally creating and releasing the art they truly want to be making.

The Light is officially out on March 20th, with its companion album The Dark due out next year. I chatted with Brittany about what the past year has been like for the group and what fans can look forward to coming up.

How did you all originally come up with the concept for the Duality albums? I know when you launched the Kickstarter that was always the plan from the beginning.

Delta Rae: We've been a band for 10 years, and we've only put out two albums, so we have a ton of music that we wanted to capture and release relatively quickly. The concept for The Light and The Dark always sort of talked about our songs in those two forms, and that meant that the light songs would embody this gospel, soulful, Southern pop sound that we have and the dark would be this witchy, swampy music that we still love to create, so those two kind of dueling forces were always present. Once we started talking about it, it got more and more exciting, and obviously we knew it was going to be a big undertaking, but we wanted to do something that would stand out and that might bring people in just on the basis of being curious about the idea behind creating two albums that had a concept or an inherent force behind them. I think our fans really get it, so we didn’t really have to explain it to them, which was refreshing.

It’s great when you feel that sense of understanding from your audience. I also think a piece of music can become that much more powerful when there is a consistent theme throughout the whole album.

Delta Rae: Yes totally, and in the past we recognized that our first two records can feel a little like emotional whiplash. You want to be able to put on an album and sink into it, so we wanted to give that permission to our fans that it doesn’t just have to be a wild ride. You know what I mean? It can be one sonic and emotional experience.

Going back to the Kickstarter, since it exceeded your goal by so much and so quickly, what was that freedom like and what possibilities creatively did that open up for you all during the recording process?

Delta Rae: You know, it is hard to capture in words what our fans have done for us through not only supporting us for over a decade, because obviously that’s why we stayed in what is generally a really hard industry, but then to have it culminate in this moment where they so fully and unanimously said, “We want you to keep going, and we want you to make as much content as you possibly can,” I think for us that was the permission and the push that we needed to say, “Are we going for another decade? Are we ready?”

Beyond the light and the dark, we’re now making an acoustic album, a live album, a holiday album, and a Southern gothic musical. The final stretch goal was getting 5,000 people backing the project, and we got well over 5,100 people backing the project.  So we are definitely writing and staging a Southern gothic musical that will be loosely based on our fan favorite video and song, “Bottom of the River.” I think we said it would essentially be “O Brother Where Art Thou” meets “True Blood” vibes, but with the pacing of “Hamilton” and the emotional depth of “Les Miserables”, so we're pulling from our absolute favorite creatives to get inspiration for this. It wouldn't be like a jukebox musical where we plug in the songs already written. It would be a fully from scratch piece in and of itself so we're already in the process of writing that now and really, it’s flowing.

I feel like there's so much crossover between music and theater and fans are often passionate about both, but I've never seen a band or artist bring that to life in that way, so that's super unique.

Delta Rae: Thank you, thank you so much. I think for us, there was actually a time when we first started where we kind of wanted to distance ourselves because we’ve done musical theater growing up. We've always loved musicals, but the association kind of made it feel like, “Oh no are we just going to get pigeonholed as, you know theater kids?”, but what’s amazing is once you’re in your 30’s, you're kind of like, “Oh I just am who I am, so take it or leave it,” so I feel like that letting go is actually what brings people in because they’re like, “Wait, no, that’s what we’re into.”

Especially with all the creative freedom that comes from being independent, why limit it? You really have the opportunity to explore anything you're interested in.

Delta Rae: Exactly, yeah I feel like there’s so many artists out there making music, and honestly a lot of them are kind of emulating each other, and it's beautiful if you want to go into one certain soundscape, you’ll probably find a lot of artists in that genre to love, but for us, I think we just want to do something different, and we want to stand out, and we want it to either make you scratch your head and say, “I’m not sure I’m into this,” or make you say, “Oh no, this is exactly what I’ve been looking for, and I’m so glad I found it,” so we don’t mind being only certain people’s cup of tea, like “Some people are going to love you for the exact same reason other people hate you,” and that was a beautiful quote that one of my brother’s mentors, Reynolds Rice, gave him, and that’s really stuck with us.

And I think especially because there was so much buzz around the kickstarter, newer fans who hadn’t listened to your older stuff or had never even seen you live are starting to pay attention now. What are the standout tracks on this album that you think are going to bring the band to new audiences?

Delta Rae: Well, I’m so grateful for that question because I think it's what I'm asking myself all the time. When you make art and especially when you've been doing it as long as we have, you have to get to the point where no matter who's watching and no matter how they react, you would make the same art either way. So we're building a world of The Light and for me, that is the joy and hope and freedom and elation that defines everything good about being alive, even amidst heartbreak or even amidst depression or even amidst political strife, that there's a hopeful note, and there’s a future worth fighting for, and there is beauty in life being rich, and that is really what we want to capture so that the album feels like a celebration. It’s epic Americana. It’s not just background music. It’s the type of music you put on when you have a deep feeling, and you want to throw your head back and sing your deep feeling.

The tracks that I've heard so far have this really big, victorious, epic feeling, so I definitely saw that come through.

Delta Rae: Thank you, that’s awesome. I’m really glad that that’s people’s reaction. You know, so many people say that the hit song that made them famous is the song that they almost left off the album, and that’s a story that you hear time and again, so the songs that I think we’re focusing on because they’re great ones to tell more stories behind are “Take Me There” and “Stronger Than A Lion” and “No One Will Miss Me.” All of those are super distinctive tracks and are actually all sung by different vocalists in the group, but they definitely capture something. One’s more of an 80’s dance groove about loving yourself, and the other is a fight song about not backing down, and the other is a song about finding your purpose and coming back to life, so they all kind of do the same thing of renewing hope within, and I think that’s actually a theme that the world needs now more than ever. Just this will to keep going and to keep positive and to keep caring, like we’ve always been through whatever type of music we’re making. Our fight is against apathy. It’s against the desire to pretend like this isn’t the one and only life that we get and waste our time with music that doesn’t have meaning or with relationships that aren’t deep and powerful, so I think we’re always hoping and striving to create those soundtracks for people who want to keep experiencing life and just finding inspiration.

Now that you’ve gone one this journey of becoming a fully independent band, was there anything difficult or unexpected about the process of making a record independently or any advice you would give to an artist who's trying to decide whether to go that route?

Delta Rae: Short answer - yes. It is so hard. It has been the most joyful and empowering year of our lives and then arguably the most difficult. Getting art into people’s hands in this day and age is so complicated that time and again I think we’ve just been knocked on our butts recognizing that even though we’ve been in the music industry for a decade, there is so much we don’t know. So by the time we put out album two, we might have to jump through all the same flaming hoops, but at least we’ll know when they’re coming and how to hopefully do it with a little more grace. I think that anybody who is striving to be the most commercially successful person in the business, I wouldn’t go the independent route, but if what you want to do is have creative control and to have a lasting relationship with the people who are going to truly appreciate and resonate with the art that you’re making, there’s no better way to do it than being independent. The key is to partner with your fans in the creation and to find people who get you, who believe in you, who are really in the fight with you and along for the ride.