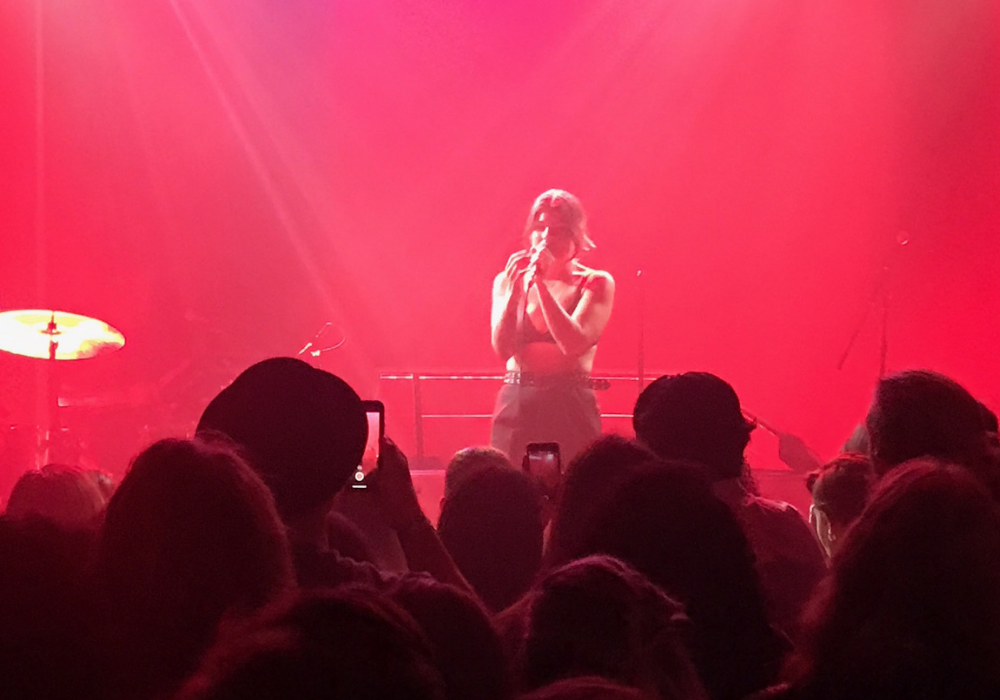 Dressed in a boxy blazer and bralette, Donna Missal took the stage at her sold-out show at The Troubadour. The sultry songstress started with “Girl” and when she hit her line “When women hate on another women everybody loses” the entire audience shouted it back to her, a sign of the times. Donna calls her genre, “Feminist Stripper Music” which is absolutely perfect. It’s empowering but sensual.

Donna’s voice teeters the line of delicate and gritty so often that I don’t know whether she’s a saint or a sinner.  She drifts between the two so effortlessly. She goes through the dreamy “Driving” and the celestial “Jupiter” and the expression on her face when she hits the final “Baby, baby, baby I’ve been waiting for ya” gave me chills even though I was drenched in sweat.

She dragged a rose up her body as she goes into “Test My Patience” asking the audience to “get down” with her before her voice lilts into a honey-soaked vocal riff that floats over the crowd.

She said, “I remember it just happened I would show up to venues  and not be able to play because I didn’t bring enough people…I was just hoping someone would give a fuck...if there’s something that you’re trying to get at and it’s taking a little bit it’s okay respect the process. It may take you a little bit to find that self respect and everyone here has a reason to love themselves.”

“Tell me where is your love” she demanded looking dead into my eyes “I want it all” she carries that last word for ages thrusting her first in the air. She’s a lion tamer, whipping her band to bend to her will with her voice stealing the show.

She pauses once again and says, “I don’t mean to make this therapy I just want to talk to you for a second the reason I wrote this song.” She steps back a moment. One member of the audience screams into the silence “PREACH” and she goes on, “If you feel like you’re standing on the edge and your are your lowest point sometimes just look...outward come down from the edge and come down from the valley and head towards your destination and give it everything you’ve got.”

She starts “Skyline” with a delicate whisper, “When you dive in the deep end. And the shadow is speaking. Now you're back at the beginning. Sky, sky, sky, sky, skyline.” I’ve never seen someone with such vocal control.

The intro for “Keep Lying” starts, this is where she turns into my Janis Joplin. A wild woman. While she repeats the phrase “Keep lying to me,” her voice gets fiercer and fiercer until she drops to her knees convulsing on the floor. After she stands up she can’t even speak the crowd is cheering so loud.

She breaks into maybe the most perfect cover of “What’s Up” and putting her own soulful take on the 4 Non Blondes anthem. Missal is fearless and she’s a powerhouse but she’s vulnerable and understanding.