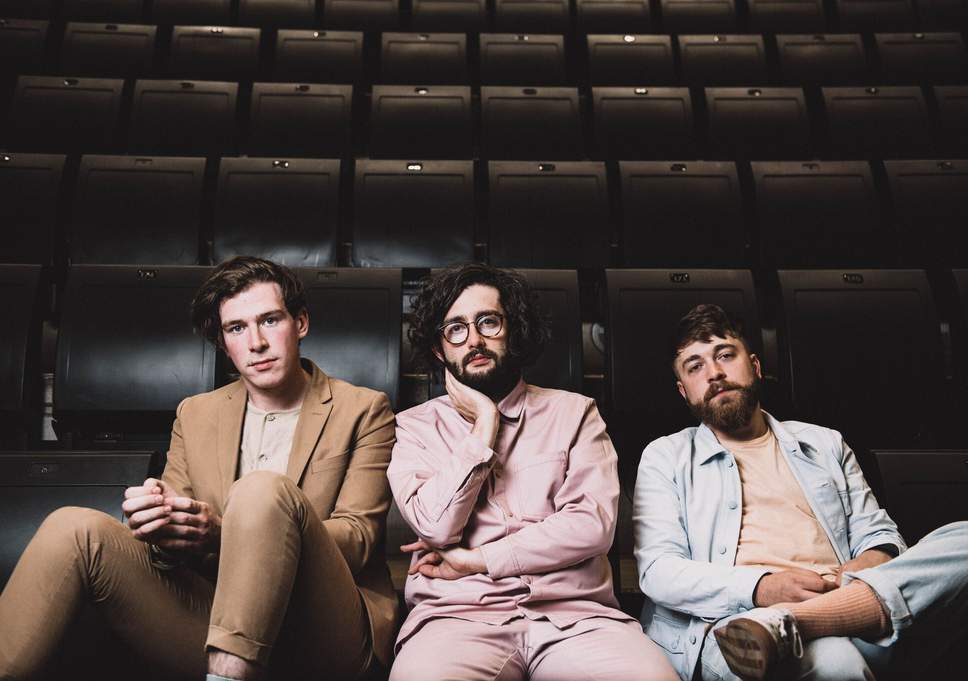 The guys of Fatherson know how to tell a good story. I met with them before one of their many SXSW shows and after detailing their love for margaritas it was clear their personalities influence their music. It's only their second time at SXSW but they were part of NPR's "Austin 100" a list of the top 100 acts to catch during the week. I talked to them about their extensive career and what's been inpsiring them lately.

So can you all just tell me how you got started in music?

Can you kind of tell me how it became your job though? How did you make the shift from it being like a hobby to a career?

Fatherson: We made the switch a couple of years ago because we just met some really great people that were like, "We want to sign you and we want to let you guys concentrate on writing music" and that has pretty much been the reality of the last couple of years. Which is amazing. And we're still figuring stuff out and everyone's trying to work hard and write a hit like everyone wants to. And yeah, we're just getting there. It's fun. We've managed to consistently play in maybe 15 to 20 countries a year for the last three years.

What do musicians look for at Sxsw?

Fatherson: Free beer! It's only our second time. We came over in 2015 before we had a record label and before we had anything like that. So we came over and we were trying to get a team together really at that point and just play in front of as many people as we could. And then we're back now just because we kind of came quite a long way in the UK and Europe since the last time we were here, but we've not managed to get back over to America so this is a nice excuse to come over and play a couple of shows in New York and then we've got six shows at sxsw. So hopefully we'll get to see some people that we haven't met before that can work with us.

And what is kind of different about Scottish bands versus American bands?

So tell me, you all did one of your album, Reimagined. Can you tell me about why you all chose to do that?

Fatherson: We'd been asked to record some acoustic versions and we didn't want to just do the kind of normal sit down with an acoustic guitar and maybe gets some violins because we'd done that in the past and we just wanted to kind of try something-- it was a good opportunity to try doing something new. So we went over to Belfast in Ireland, Northern Ireland with a couple of our friends who had just been on tour with us and they play kind of like electronic and pop music. So it's kind of a collaborative venue. And, yeah, we just went off for a week, and we did four songs off the album. Just kind of disregarded everything apart from the vocal, really, that was on the original song and just rebuilt something around it. But it was pretty fun.

That's so cool. It's so cool. Yeah, you're covering your own songs. What's kind of been the biggest challenge for y'all in the music industry?

Fatherson: We've got-- the people who work with us are really nice and we trust them a lot. So it's not the easiest thing in the world being in a band, and we've been doing it for years and years, now. And we've managed to kind of stay away from too much horrible-- I think that when you get up in really tough times, the people that are working with you or the people around you aren't in it for the right reasons or backstabbers. We've never really - touch wood- luckily, been in it for the money. So we've never had a really crazy, massive record deal that if you don't sell ten thousand albums, they drop you and your life's over, sort of thing. It's like, let's just build a career and be an album band.

Fatherson: I think the difference between coming with the label, and to be honest, in lots of genres in music you don't really need the label, especially at the moment. For us, it works really well because, as I said earlier, we like to perform albums. But getting the time and the luxury, and getting to do it with a good producer and spend a few weeks just working on the album. And we got really lucky last year when we were writing something. We got some money to have our own studio in Glasgow for nine months. And we just went in there every single day, which I don't think we would have been able to do if it wasn't for the people who were going to help us out.

Fatherson: We're just working on another record! It just happens, I think with the way it's going just now. Actually, since we came to South-by last time, we released another two albums. So that would look like the potential if we put a record out next year, we'll have put four full-length albums out in four years or five years or something like that, so. We listen to lots of stuff. There's a girl called Noname that's fucking unbelievable, but she's definitely more hip-hop and stuff like that. So she's amazing. Just people like Julia Jacklin and SZA and basically, I'm just into R&B and hip-hop at the moment, and we're a rock band.

Yeah. I was like, I love that you're into cool females in hip-hop right now.

And y’all are NPR favorites! You were on the Austin 100.

Fatherson: Well, what was really weird is last time we came, NPR played a song just out of nowhere. They just played a song. And we don't have any radio or anything over here, which is amazing. And then we ended up in the top five of Wired for everyone to see. So it's fucking crazy. For a band that, by many respects, is still largely unknown in the US to have some pretty amazing backers like KXP and stuff. And NPR, have always been on the back-burner for no apparent reason other than they must like the music. It's not necessarily like someone's shoving it down their throat or that we're like this high-pay fucking crazy success-story of the last six-- we're just four guys that fucking play music.

I guess my last question is what's your best piece of advice to a young musician?

Fatherson: Surround yourself with people that you can get on with and like and trust. I think that's the main thing. You've got to make sure that your bandmates, everyone, that you trust them and everyone's on the same page and working for the same thing. And that people like managers and just everyone around you when it comes time to get those people are all nice and not in it for money.