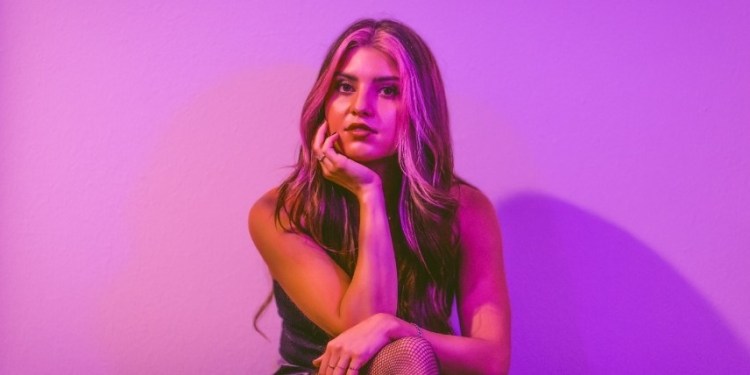 Hannah Hausman is one of our fav up-and-comers, her dreamy, unique voice really sticks with you and her glistening melodies are so vibrant and fresh. We talked to her about finding her voice, new music, pageants, and missing concerts.

So let's start with how you got started in music!

Hannah: I've always loved music my whole life, and my mom put me in piano and voice lessons when I was young. I never really wrote songs growing up. I mainly wrote poetry. I started whenever I was 6. My grandmother had me write poems with her about my trip to visit her, and ever since then, I just fell in love with it. Growing up, I did chorus and stuff, and I was always obsessed with finding new music like I would make all my friends mixtapes with my new favorite songs and things. When I was probably around 17 or so, I started writing my own songs, but I was kind of insecure about it, so I never really told anyone. But I wasn't really good at guitar or piano or anything, so they were mainly just like melodies and things. I had hip surgery, and I was on crutches for six weeks. And I always wanted to play the guitar, but I just never made time for it. So, I started playing the guitar then and then started putting my poems to songs. And then, after that, it just all kind of clicked, and I fell in love with songwriting.
Awesome.

And I was reading your bio, and you lost your voice?

Hannah: The first song I was recording, I was living in Australia, and I knew one friend who was a producer and lived in LA. So he flew me out to record the song, and I got sick on the plane. By the time I got to LA, I was already, like, losing my voice and just like a really bad virus. But I was there for a week, and it was the only time I was going to be in LA, and I had to record it. I just pushed through it. And then afterward, my voice hurt really bad, and then it just never came back. So it was like a year where I struggled and I moved to Tennessee, and then I went to a really good vocal therapist there and worked with her for like six months. I learned how to sing properly with my voice, like with the instrument I was given. Now, like, my voice sounds completely different. It's a lot more healthy.

I actually love when people have very unique sounding voices. Do you know what I mean?

Hannah: That's something that struck me too because I spent my whole life thinking I wasn't good enough because I wasn't amazing at doing crazy riffs and things. I then realized all of my favorite artists; the thing that made me love them was that their voices were unique, not because they could hit these crazy notes or do anything. It was people who had voices that were different from everyone else, which helped me gain the courage to make music and still helps me a lot now.

You used to do pageants! Can you tell me about that? I'm from Texas, so there's no judgment.

Hannah: My mom wanted me to do pageants whenever I was younger, so I did. And then I did singing as my talent. And I mainly did pageants for scholarship money for college. But the thing is, they want you to sing Broadway style. And for probably ten years, I was trained in Broadway-style, and it never felt right to me because my voice isn't made for that. So I had all this vocal training, but for a style that wasn't me, and I always loved singing. Then I would get off, and I would feel like it wasn't me, if that makes sense. Once I started writing songs, then I was able to find my voice. But they were fun. I met a lot of really good friends through them. But it was hard just because-- with singing because it made me try to become someone that I wasn't.

How have you been staying inspired and motivated with everything that's been going on recently?

Hannah: Yeah. I mean, honestly, it's been very hard. I have been struggling quite a bit just because growing up, the thing that inspired me the most has always been going to concerts. Any time I would feel uninspired, I would just go to a concert, and 100% of the time, I would feel inspired afterward. There have been periods of time during this season when I haven't been inspired. I did go through a really intense break-up during the last year. That gave me a lot of songwriting content for a long time. Honestly, all year all the songs that I've written have mainly just been me trying to process my emotions rather than me trying to create something, which I find I've written better songs that way just because they're a lot more real.

And I'm sure you wanted to do your own shows and stuff with all your releases.

Hannah: I mean, I guess it has been good because I guess a lot of the times when I probably would have been at shows, I've been in my room practicing and stuff! So when they come back, this time will definitely have benefited everyone. And I feel like we're never going to take them for granted ever again.

What has been the biggest challenge in your career for music?

Hannah: I guess the biggest challenge mainly was just my inner critic, I would say. Because I feel like I wasted a lot of time trying to sing like someone else or just telling myself I wasn't good enough, that if I would have believed in myself earlier, I feel like I would have started writing songs and sharing them with people a lot earlier. So I think I have kind of been my biggest enemy all along. It has been a cool journey, though, of learning to love my voice for what it is and figure out how I can improve my singing without judging it or critiquing it from a healthy standpoint. It's taught me a lot, and I feel like it's made me a lot more appreciative of my voice and a lot more supportive of other artists and things because I know just how hard we are in ourselves.

What would be your best advice for a young woman who wants to pursue music?

Hannah: The biggest advice I would give her would just be to write as much as they can and just experiment and try different things. And mainly just putting yourself out there and sharing your stuff without asking yourself if it's good enough. At the end of the day, it's if you like what you're making, that's all that matters. So just experimenting and practicing a lot and just writing. Because I feel like a lot of times when I first started writing, I wanted to write really good songs. And so I would get stressed when I wrote a song that wasn't good. But I feel like now it's helpful, it's more helpful to me, to write a song and to finish it and not be a good song than to have a brilliant idea that I never finish.