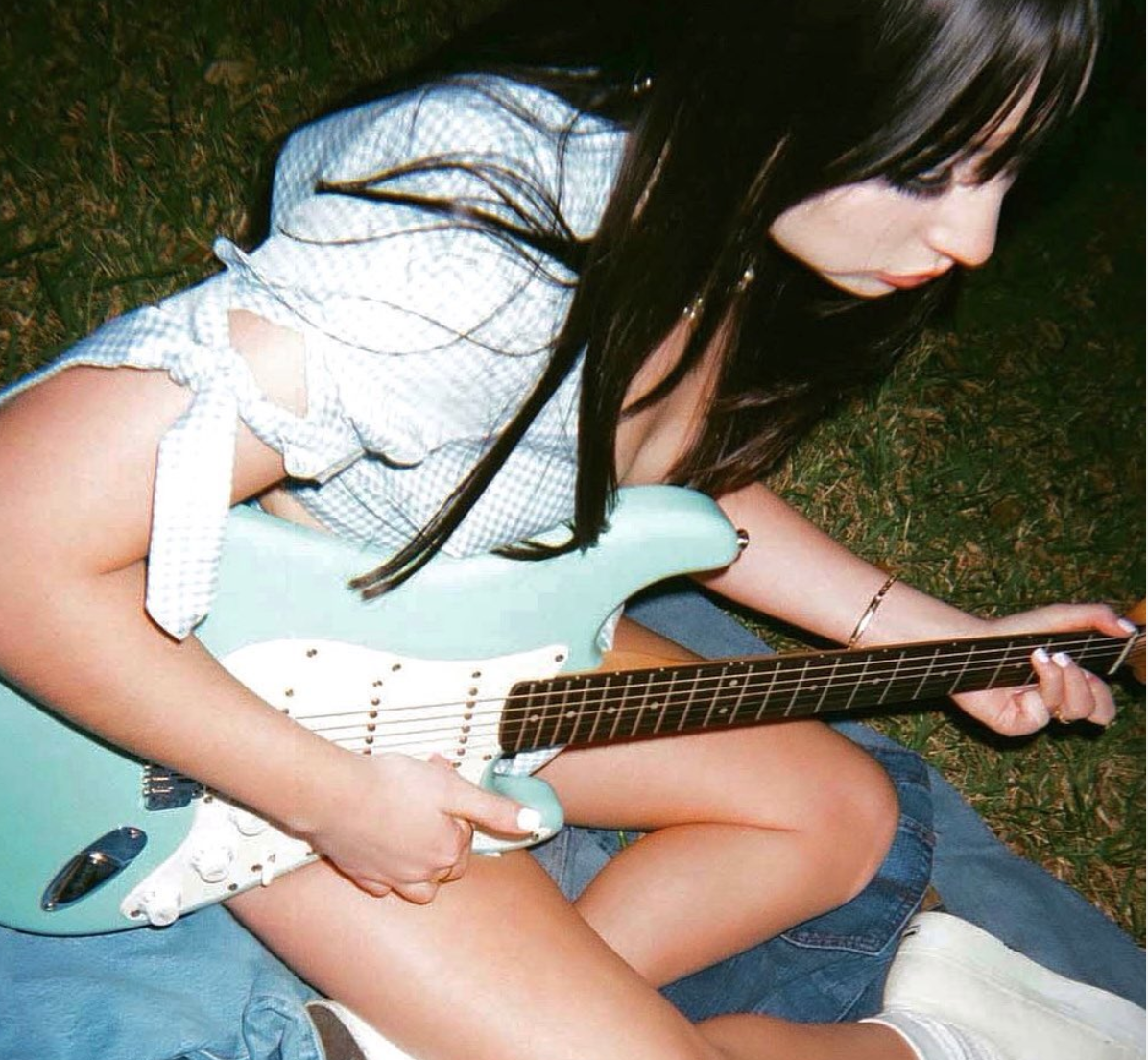 Lily Forte's songwriting feels so relatable, she finds these specific metaphors that just hit so hard. It feels so personal like a page from her diary. She captures this feeling of youth and vulnerability and it just takes you all back to your first heartaches. We talked to her about her music, her love of Carole King, and those girls that just seem so effortless.

Lily: I started singing at eight, but it wasn't until I was twelve when I wrote my first song. That was when I had my true spark. I studied and acting and theater in college, but I realized that music was what I was supposed to be doing.

I would go right into those practice rooms and sort of sing about how I felt about all of that. I even wrote songs about acting and all of that. And it was pretty-- it was a cool sort of transformation.

Lily: When I was 12, it was just about this boy I had a crush on and-- I had this song I wrote called "Small Town," and it's something that I look back at the lyrics and-- it came about love and-- I don't know what you really know about love at 12. But, you know, it definitely-- it had emotion to it. So I feel like that was the beginning sparks. Eventually, I started to find other things to write about that weren't just like the typical love song, and I started to find inspiration in everything.

Lily: I feel like I always am getting myself into situations where I'll really like this guy, and he's sort of perfect. And then, he likes someone else who I feel like I can't compare to. It's that teenage idea of like when you're a teenage girl, you just compare yourself so much. And this girl who wears the loose-fitting Levi's is perfect, and I feel like I would do anything to get his attention, but she does nothing, and he'll still always, always like the girl with the loose-fitting Levi's.

I love how you took that kind of one clothing on, that trope that everyone thinks of. It's like all the girls that pull off all those effortless looks.

Lily: Exactly. I feel like every day I wear like a full face of makeup, put on like this whole planned-out outfit, and someone could just throw on an easy outfit and looks like the best person in the room, you know?

And what would be kind of for you, as someone so young in music, like what would be like one of the biggest challenges for you right now?

Lily: I think the biggest challenge for me initially was really getting people to listen to the music. There are so many great songs coming out every single day. And I feel like almost everyone's making music or at least is an artist nowadays, which is awesome. But it comes with a lot of challenges because-- when I first released my song-- you're maybe posting it on Instagram and releasing it is, but it's not. And I'm constantly searching for new ways to have people listen. And with the rise of TikTok, it's been really helpful. I've built my entire fan base through that, and it's been great. But every day, I'm sort of searching for new ways to get people to listen.

Do you think now that TikTok's gotten so, so popular, it's become way too oversaturated? Are you having trouble finding an audience?

Lily: It definitely is pretty saturated. However, it's so interesting, this video that sort of goes "viral." And I feel like I push out so much content, and once in a blue moon, a bunch of people actually see it. And then it's worth it at that point because you do get a rise in fans and followers. But yeah, it definitely is very saturated, and my whole for you page is all writers and singers and performers or people in the industry. It gives you a perspective on how big it really is.

I do think social media for artists-- do you ever feel like you're more pressured to put out content instead of making good music? How do you find that balance?

Lily: It's a hard balance because I never really felt like that until I released my first song. And once you start getting attention, you sort of feel there's pressure and this obligation not only to be making good music but every day, you have something new and exciting on your Instagram feed or your TikTok. And the balance is hard. However, I think the most important thing is the music. And I try to remember that if I get caught up in the social media stuff, but it is important. Social media is important, but the music is the most important.

How have you been kind of staying motivated to create in such a difficult-- and I'm going to say year because I still consider this last year.

Lily: Honestly, I feel like I've been inspired more than ever now because I began to look in. I've done so much self-reflection on the past year and how my life has sort of changed and how I view the world, and how I view my music. And I've used sort of everything as my muse. I find inspiration in the little things like my first sip of coffee in the morning, so I find inspiration in that or going on drives. And I feel like it's given me so much time to create, and I've been thankful for this time.

And who were your biggest artists that you look up to, maybe growing up or even now?

Lily: Growing up, I was hugely inspired by Carole King. My mom would always play Tapestry. I was always just so inspired by her music. And when you're a kid and your parents sort of play older songs for you, you think it's all stupid. But Carole King stood out to me so much. And I knew every word to her album Tapestry. And it just was amazing and so inspirational from a young age, so that was definitely growing up was Carole King. But I think my overarching sort of inspiration or idol now is Lady Gaga. She's such a good artist for people to look up to because she's such a good role model. I remember even as a kid when her stuff came out, and she just made it feel okay if you weren't the most perfect girl in school or whatever it was. You were you, and that's okay.

I love that so much. And what else do you have coming out this year?

Lily: I have one more single coming out, and so my EP is going to come out. So I'm so excited about that. I don't have the exact date yet and the time frame because I'm honestly currently working on it now. I was just in the studio last night, but yeah, super excited.

And how are you kind of prepping for that?

Lily: I've really been focusing recently on making this a cohesive project from start to finish. What story do I want this to tell? All these songs were written from the start of quarantine until now. And it sort of tells-- I've been figuring out the order I want to put the songs in and the meaning behind them and how they flow together and tell the story. And I think people will be excited to sort of learn more about the girl with the loose-fitting Levi's. There's another song about her, and there's a song about faith and sort of the infatuation with the guy that I'm writing about. It tells a really good full-circle story.

And what's your best piece of advice for young women who want to be in music?

Lily: I would just love to tell them if you have a dream, fight like hell for it and don't give up. People are going to say no to you a million times, but you've just got to keep pushing and have that spark within you, and just never let it go out.