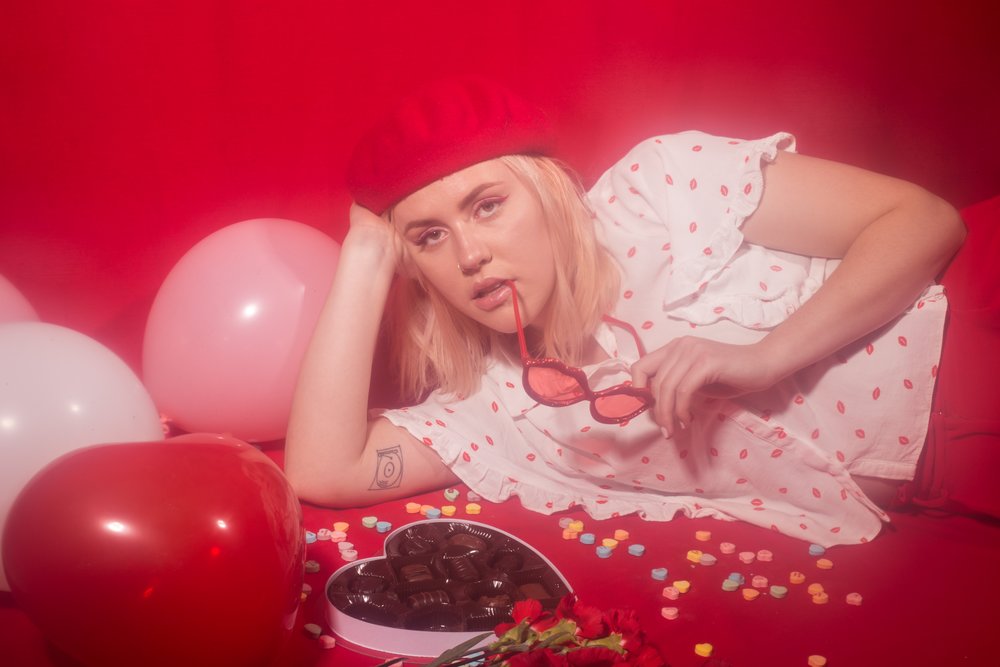 Love You Later has the dreamy space pop vibes that we truly love. We talked to the up-and-coming artist during SXSW about the challenges she's faced in the industry, breakups, and what she has coming up this year.

So, let's get started with how you got started in music.

Love You Later: Okay. So, my parents were both musicians; I always was around music. I started doing musical theater at a really young age. I used to, on Sunday nights, I used to go to this restaurant with my dad, and we would sing karaoke, and so, that was kind of-- I guess from 4 to 10 was where I would just do music and different things all the time. I started doing musical theater more seriously when I turned 10 or 11, and then kind of stopped doing that halfway through high school. And then, I started writing my own music and doing that whole thing, and just kind of realized that that's definitely what I want to do. And, so, yeah. I think the main thing was me being born into music. That was definitely helpful.

Do you have a favorite musical part that you had?

Love You Later: Yeah! I've left that behind, but it's still deep inside of me. There's definitely a part of me that I'll never let it go. I was Miss Hannigan in Annie. That was really fun. I really liked being mean because you don't really get to be mean in the world, but I got to be mean, and it was fun. Yeah. I think that was my favorite.

Do you think that kind of helps you when you're performing on stage?

Love You Later: Oh, for sure. Definitely. I think that, I mean, entertaining is also a huge part of my artistry, and I mean, I think it should be a part of everyone's, but I take it very seriously. I think it's super important to do stuff people have never seen. And it's not-- a lot of music is like, "Let's do something no one has ever heard before," which, yeah, that's, of course, important, but it's also like, "Let's do something no one's ever seen." You know what I mean? For live, for even music videos, and branding, and everything. It's like you got to entertain because then people will lose interest. I've always just kind of strived to be different.

For sure. And what would you say is the biggest challenge you faced in your career so far?

Love You Later: I would say just being a young female. When I first moved to Nashville, I felt super intimidated, first of all, just because I play guitar, and I write, but especially in Nashville, it's like everyone does everything, and it is intimidating. Especially because a lot of it is guys, but I have had a lot of people tell me no. And, obviously, that's part of the music industry, of course. But a lot of times they will say, "She's too young." That's what I get a lot. It sucks but I kind of take it as “Well, I've already done all these cool things at a really young age and so I just have to take it step-by-step and know that there's a reason for that.” It's fun to prove them wrong. I also do think, though, in Nashville, everyone's very accepting of whoever you are. Whatever walk of life you're in. As long as you're doing music for the right reason, that's really what matters, so.

I have to ask about your song Emily because I'm an Emily.

Love You Later: Backstory, her name's not actually Emily. I changed it, but it flowed with the song a little bit better. Basically, I was seeing this guy and our first date he kind of just threw in there, "I just got out of a relationship a few months ago. I was in love with her," blah, blah, blah, "But don't worry about it. I don't think about her anymore." It was very just-- he was just kind of-- just threw it in there. We didn't have a long conversation about it so I didn't really think too much about it. And then, a few weeks go by and-- I was super into this guy. And then, basically, he was like, "Hey. I can't do this. I am still in love with her." And it was just like, wow. I should have seen it coming. So I wrote the song a year after it happened. Because at that point I was just, whatever. It was basically, I want him to be happy and I don't want to be his burden or feel like a burden. So that song, I think it's unique because a lot of songs like that are, "I hate you. Why would you do this?" But it's more, "I want you to be happy." And, yeah. I try to put a positive look on things.
And it's still sad, but-- everyone is weeping to it, but. But it's definitely just a letting go song. And that song was the only song that it literally took me 10 minutes to write because it was just one night it just all came out.

Love You Later: I just released two singles, so I'm just kind of letting those chill. We're going to play, hopefully, a ton of shows to get those-- just let the music groove. And just kind of play as many shows in as many cities as we can. Meet as many people. That's kind of what we're working on. We're going to shoot a music video for "Harder on Myself" in a few weeks.

How do you kind of approach the visuals for a song? Especially for Harder on Myself.

Love You Later: This is our first music video that we're going to shoot. But, I mean, visuals are important to me regardless. For Harder on Myself, it wasn't really planned, the cover of it wasn't really planned. I was shooting with-- well, okay. I was shooting for just press. And then we decided that we wanted to go to this random-- it's a rooftop basketball court in LA. We just went up there and started doing cool stuff with basketballs. And then I was, "Okay, this feels pretty," I mean, "Super different." I don't know. I mean, it's kind of symbolic of this guy's playing games. That sort of thing.