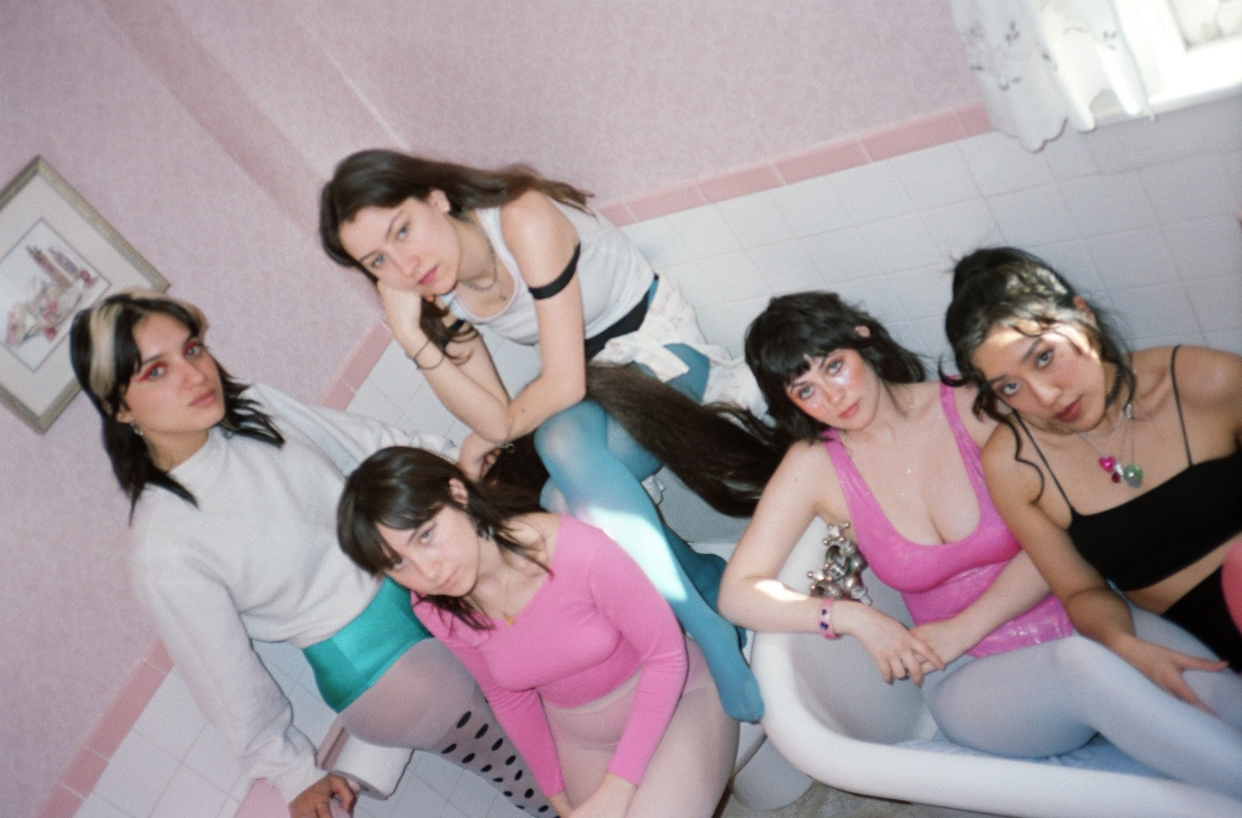 It’s been almost a year since I first interviewed Rachel Stewart of Sedona in her Bushwick apartment and we clicked immediately. Stewart is the lead singer and creative force behind the Brooklyn-based band. She found bandmates Merilyn Chang, Claire Gilb, Margaux Bouchegnies, and Tia Cestaro after moving from LA to New York. Sedona finds its strength in collaboration.  Their most recent single, “Soft Machine” came out in May and was co-produced by multi-instrumentalist Barrie and Stewart. Stewart took the unexpected downtime the Covid-19 quarantine forced upon us all to create something that celebrates friendship and the journey of Sedona so far. “Soft Machine” weaves in and out of optimism and heartbreak with a much more subdued and gritty sound as it ebbs and flows while maintaining a steady march forward. There is something at the core of it that ties that back to the carefree fun-loving vibrancy of the band.

Stewart called from somewhere in Georgia while one the road back to New York from her hometown of L.A to talk about the evolution of Sedona, how the music video came to be, and their forthcoming EP.

You have the coolest music videos, but this one is a bit different since it’s all found footage and it’s not as stylized. Was the plan for the video all along or did Covid have an impact on how the video was made?

Rachel Stewart: Yeah, I mean, there wasn't even going to be a video, I was just gonna drop the song. And then I was all stuck in my apartment and I have all this footage from a few years back of the beginning memories and evolution of Sedona and I was like, “I should just like string together a little montage type video where my friends are the focus, and all the people who have helped with me are the focus.” It's kind of an homage to my friends and the band and everyone who was there at the beginning rather than the classic pop videos that I do where I'm this eccentric character and I'm being performative. This one is definitely all found footage of my life from the past few years. So it's very candid and raw moments with friends that I've put together and I haven't even told any of them about it.

How important are music videos to you and to Sedona as a project?

Rachel Stewart: I think what strikes me in terms of like, figuring out an artist or musician is the content and that's what draws me into making stuff. I want people to get a deeper layer of the music with an image. I also think that it shows a different side of the song and that's why I put the song out first because it is a more melancholic song and the video is a bit jokey. So I kind of wanted to poke fun at the moodiness of the song itself with a video. I like to have them play off of each other. I edited this one myself because I was in quarantine. So I kind of wanted the video to reflect the time period we're all in where we are just kind of reminiscing on past memories and moments with people. That's what the video is and, in a way, what the song is about. It’s about looking back at things and moving on from sadder moments. But the video is definitely a reflection of holding on to happier moments. So I kind of wanted to pair those two things together.

I really like this song. It still feels like a Sedona song, but it's really different from everything you've done previously. I remember you saying last time that we talked that you're kind of inching towards doing like a wider release of more songs. And you said it was not as pop. Is this the start of moving towards that?

Rachel Stewart: It definitely is. And I think it's easy to get caught up wondering “what's my sound?” or, “is this a good follow up from a previous release?” or, “this shouldn't just be in my catalog.” And I think that I've officially come to terms with the fact that I'm going to be making a lot of different sounding songs. I think all the singles are kind of like big pop songs, this EP is more indie rock, pop, a little bit left field. I'm sure once I'm able to give that type of cathartic release into the music maybe I'll do a pop album, or maybe who knows what I'll do! I think just for how I'm feeling and with the times and everything, I definitely want something that has a bit of an underbelly to it. I think that Soft Machine is definitely the stepping stone into that world.

I think it's really great when artists don't feel like they have to keep doing the same thing over and over. I love people who for every album, you're like, “what's this gonna be in here?” You know it's gonna be good and it's gonna sound like them, but it’s exciting to see what they do. This still sounds like you. It just sounds like a different side.

Rachel Stewart: Yeah it's a different side of the same coin and it's been really fun to allow myself to go there. I think when I put out even just my first song “Call Me Up” the evolution of those pop songs and those singles that I put out each time I was like, "uh oh, where is this going?" But you just kind of have to let the music take you where it wants to go. And yeah, I was always like, "Am I gonna be that person who as soon as you hear it, you know, it has this distinct sound every time?" Then I realized my voice does that.

What’s next for Sedona? Obviously that's really hard with COVID going on but what's your ideal next step?

Rachel Stewart: I wanted to put all the music on hold just because it wasn't an appropriate time to be self-promoting. I think the next move is to kind of reevaluate the EP, and I think I'm gonna start rolling it out in September. “Soft Machine” is the first single off of it. September, we are planning on putting out the next single, which is called “Crying on My Own.” And that one is a great song. We went up to Vermont and shot a big kooky ice skating video as a band.

Rachel Stewart: Oh my god. Hit me with the hard one. Jeez okay, hold on. I’m looking at the clouds in Georgia. Oh, I would say you've got what it takes in terms of like any obstacle or goal? Obviously, self-doubt is going to occur during tough moments or moments where you care a lot about something. But I think it's always important to step outside or try to step outside of whatever you're going through or whatever you're dreaming of it and tell yourself that you've got what it takes. Also, just be patient with yourself.

I am a writer and musician born and raised in the Texas Hillcountry. I learned how to be a fan from attending 15+ The Maine shows from ages 14 to 21 and tumblr fan pages. I feel most at home at small venues with floors sticky from stale beer and have a borderline unhealthy love for sad songs. I maintain an equal level of fanaticism for Elliott Smith and Harry Styles. I would also die for Phoebe Bridgers.