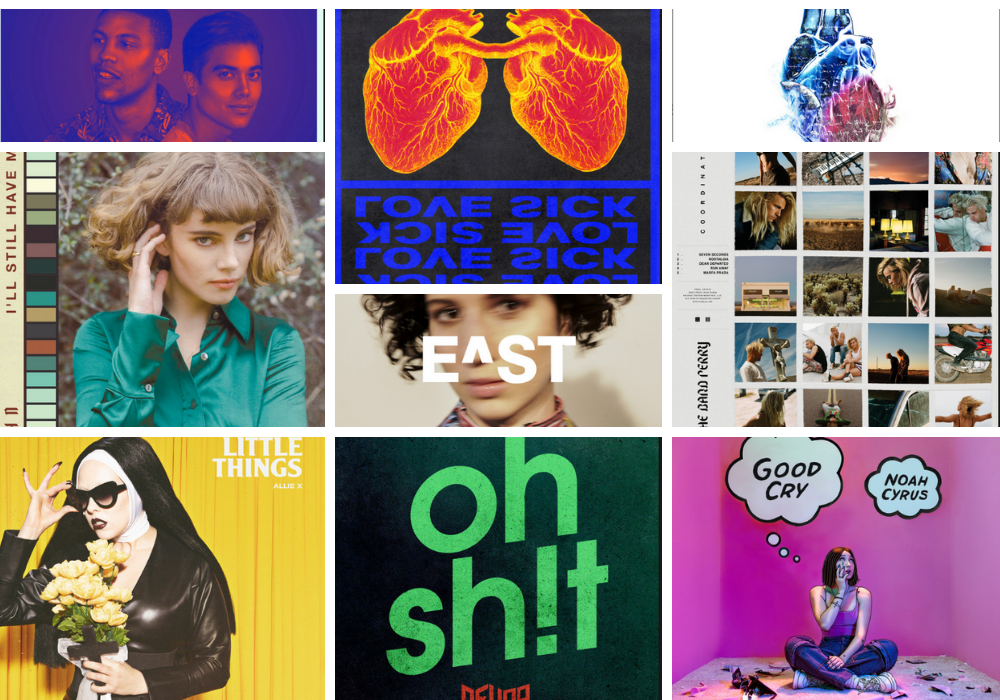 Cyn is always a good idea. Her latest song gets more personal. It's the perfect breakup song, she's sad but she knows she still has herself.

Speaking about the inspiration behind the song, CYN explains; “After realizing a break up was imminent, I wrote this song to convince myself that everything would be fine. Focusing on who I am and where I’m headed made me feel less empty and more like I would make it through this heartbreak— finding sanctuary in myself was my safest bet and sturdiest lean upon.”

Allie X is seriously taking over. It's hard for me to think of a song I'm not obsessed with. She's getting ready to release Super Sunset and she keeps dropping gems.

At its simplest "Little Things" is just about the monotony and says X "...madness one feels sitting on the same couch in their apartment for four years." She adds, "I always have the camera, my mind, on a macro zoom, so focused on meaningless details that, close up, look so wrong. I can't go on this way for the rest of my life. In this song, I'm crying out for someone or something to give me a different perspective."

New York electro-R&B dup Tropic just released their cover of the Earth, Wind, and Fire classic "September." We love the twist on this one. Covers are truly the best when an artist makes it their own.

“Earth, Wind & Fire are one of the many inspirations we both share, and while no one can do it like they can, we felt the need to show our respect and admiration for one of our favorite artists with this heartfelt cover of one of their biggest hits. We definitely put our own Tropic twist on the track, but we hope it still has the familiarity of a song that everyone and their mother knows and loves.” - Tropic

"I remember we'd been listening to Michael Jackson on a rainy Glasgow day on our way to the studio," Shaun says of the genesis of "Fever." "We came up with a super rough idea that started just with the 808 and the line 'I've got a little fever for you’".

It's pretty well documented that we love morgxn. His song "home" really broke through and now he's done it again and remixed it with Walk The Moon.  They first performed the collab at Lollapalooza and now it's finally released with visuals on the way soon.

morgxn says, "When Nicholas from WALK THE MOON joined me at Lollapalooza on this song I felt something cosmic in that moment and the idea was born to make a new version. How often do you get to step back on the mic and sing with the feeling of singing in Paris, London, Berlin, Salt Lake City, Sacramento, Chicago, New York, Nashville...

How often do you get to sing a song already knowing it has changed your life?

Noah Cyrus has finally released her debut album Good Cry and I quickly noticed one of my favorite artists LP listed as a feature. The song "Punches" has all the makings of a pop hit but LP's insane vocals really drive this home for me.

It honestly sounds like one of LP's songs with a driving beat and lyrics about struggling in a relationship but staying because you love someone.

"You might say I wasted on you
But when you break, I break for you too/I can't be this black and blue
But darling, I'll take the punches for you"

Dev has a beautiful backstory, she grew up in a small town in rural Indiana, Dev always felt like an outsider - she spent her days playing guitar and performing in small venues and collecting tattoos.

Failed attempts at fitting her uniqueness into a crowd of mean teens lead to depression and being diagnosed as Type 2 bipolar by age 18. A change was necessary and she yearned to be surrounded by people who would accept her individuality, so she moved to Los Angeles. Once in LA, she battled a drug addiction that saw her admitted to rehab. Now on the road to recovery, she's been working on a new body of music that speaks of her experiences with mental health and bipolar disorder, how she has handled the notion of self-worth and coming to terms with her addiction. Her new song, "Oh Shit" is "about dissociation & detachment from reality. a downward spiral, obvious to you & those around you. near death experiences"

The Band Perry is back and completely different. They've redone their sound but we are here for it.

They're definitely stepping away from the country sound from their sophomore album 'Pioneer' and going into more synth territory.

The band told Billboard, "The concept of genre lines was never a part of our household," Perry says. "Gratefully, something that's happened over the few years since our last LP is that so much of the world has become fluid, and genres are one part of that fluidity. With Spotify and streaming we all have access to everything we can possibly want and decide as listeners that it all fits together. We just want to be our most true selves and most excellent selves, creatively. We really feel like the world deserves that from us. That was the initial perspective we brought to country music; It served us well there, so I think it will continue to as we just make the best, most true music we can."

E^ST is back with her new song "Alien" she says:

“This song is about feeling like an outsider in the world, where even doing ‘normal’ things like getting the bus or dancing can make you feel weird and out of place. And it's calling out to others who might feel the same, in the hopes that feeling ‘alien’ can bring us together.”

We've all felt that way before and the song does have those spacey elements we love from E^ST. It feels like being trapped inside your mind, being alone even when you're surrounded by people.